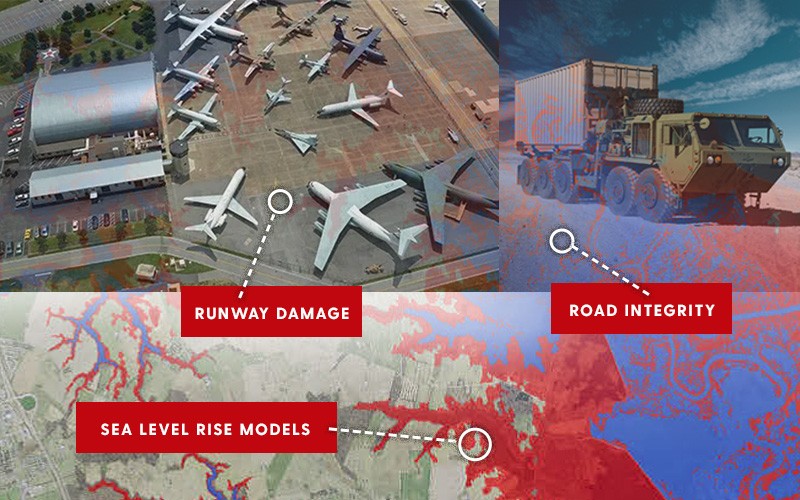 We walk over it, drive over it and build on it.

Yet, it is probably safe to say, most of us rarely think about the ground beneath our feet.

Underneath the grass, concrete, asphalt and other materials in our built environment, however, soil provides structure and stability for what lies above.

The United States military wants to understand the role that climate impacts, such as flooding, storm surge or sea level rise, will have on soils at its coastal military bases and facilities, which are critical to national security.

Soil conditions can affect the integrity of the ground underpinning buildings, roads, bridges and more. For example, if a soil’s pH were to rise significantly, due to increased salt content-containing ions such as sodium from storm surge, it could create saline conditions that could hamper the ground’s ability to support this necessary infrastructure.

Understanding these threats will enable faster and more accurate routing and maneuverability for U.S. forces.

The Delaware Environmental Institute (DENIN) is collaborating with the Engineer Research and Development Center (ERDC) of the U.S. Army Corps of Engineers and Louisiana State University to understand how vulnerable military installations along coasts may be affected by soil changes due to sea level rise and coastal flooding.

DENIN has received $3.79 million in first- and second-year funding from the U.S. Department of Defense to start this work, and is eligible for an additional $3.82 million in continued funding over the following two years. Led by DENIN Director Don Sparks, Unidel S. Hallock du Pont Chair of Soil and Environmental Chemistry in UD’s Department of Plant and Soil Sciences, the UD effort includes interdisciplinary collaboration with Yan Jin, Edward F. and Elizabeth Goodman Rosenberg Professor of Plant and Soil Sciences, and Chris Meehan, a professor in the Department of Civil and Environmental Engineering and director of the Delaware Center for Transportation.

In particular, Sparks said, there is a lack of information about what will happen when currently non-saline soils suddenly become salty. It’s an important issue, as a 2011 report by the National Academy of Sciences estimates that a 3-foot rise in sea level would impact 128 U.S. DOD facilities situated on or near a coast.

“There has been a lot of work on soils that are already salty in the west, in areas like Arizona, parts of California and Utah. Less is known about soils that are not already saline and what will happen if they are exposed to ongoing or repeated flooding from seawater,” said Sparks. “One of the things we want to do in this project is collect a lot of data on coastal soils, including those at U.S. military installations, through intensive monitoring of key parameters at selected field sites.”

Based on these data,  the researchers will collect soil samples from the sites and subject them to different flooding and salinity regimes in the laboratory to gain a more detailed understanding of the mechanisms affecting soils physically, chemically and biologically.

This data will allow the DOD,in particular the ERDC, to build sophisticated geospatial and modeling tools to understand what to expect under various scenarios and conditions.

For example, if soil changes occur underneath roadways or runways at U.S. Air Force bases, how does this affect the mobility of soldiers and equipment from tanks to trucks, or access to materials routinely moved on and off a military base? The information could be useful for non-military decision-makers, too, in academic, government, business and nonprofit sectors.

In some areas of Texas and in the west, soils with high levels of sodium swell when they get wet and subsequently shrink when they become dry. If you have ever stepped carefully over an uneven sidewalk, you may have witnessed this soil shifting firsthand.

“You can imagine the effects this would have on things like foundations of buildings,” he said.

The researchers will use many instruments at three research sites along the East Coast and Gulf Coast for ongoing monitoring over the next several years. Two of the long-term study sites will be located in Delaware and Louisiana, since both are coastal states. A third site is likely to be situated at a major Atlantic or Gulf Coast military facility that has experienced a number of flooding events in recent years due to hurricanes.

The UD team will collect soil and water samples and data after different flooding or extreme weather events to help them understand what is happening at the field level in order to reproduce these conditions in laboratory experiments.

Sparks will focus on understanding the soil chemistry changes that occur under different salinity levels and as oxygen conditions vary from oxic (oxygen-rich) to anoxic (severely oxygen-depleted). Field measurements will enable the Sparks team to set up a microcosm in the laboratory to explore how elemental calcium, sodium and carbon cycling changes occur both in solution and on the soil solids in response to a range of oxic and anoxic conditions and pH. Such data will be useful in helping to assess impacts on soil properties under different flooding and salinity regimes, which could impact military infrastructure.

Meanwhile, Jin, a soil physicist, will look at the effects of these changes on soil physical and hydrological properties and processes. This could include studying how soil shrinking or swelling occurs in response to increased sodium or calcium, and whether this changes the way water is retained, how water flows or is transported through the soil, all of which can impact soil ecological function and military operations.

Civil engineer Chris Meehan will use this data to better understand how the physical and mechanical behavior of soil changes in response to sea level rise and saltwater intrusion into soil. Areas of focus will include changes in soil strength and soil compressibility or changes in the way that water flows in and through the soils. These properties are of particular importance because they have a strong effect on engineered structures that are built on top of the soil, such as pavements, buildings or bridges. For environmentally contaminated sites, they can also affect the behavior and movement of contaminants in the subsurface.

UD undergraduate and graduate students and postdoctoral researchers will play an active role in the work, gaining field and laboratory experience, designing experiments and interacting with partner institution colleagues with different areas of expertise.

Louisiana State University brings complementary expertise in modeling and understanding ecosystem impacts of flooding. Specifically, LSU researchers are interested in how the shape of the land, known as geomorphology, will be changed in coastal military settings.

Sparks shares their concern. Boundary areas such as marshes that separate coastlines from inland areas where the topography changes are quite important. Frequent or sustained inundation from saltwater, for example, can alter the ecosystem’s ability to support vegetation, opening the door to other changes farther inland.

While people don’t always relate these climate impacts to national security, Sparks said these issues are linked. The data collected will form a clearer picture of what’s to come, allowing the U.S. Armed Forces to plan ahead wherever there will be military installations or movement of soldiers.

As a coastal state, Delaware is susceptible to the climate impacts under study, including sea level rise and flooding. Additionally, Delaware is home to a major military facility — the Dover Air Force Base. These factors make Delaware an ideal place to ask these sorts of questions. UD’s expertise in soil science, water resources and other environmental research, and outstanding core facilities, such as those in the Patrick T. Harker Interdisciplinary Science and Engineering Laboratory, make UD and DENIN researchers especially suited to answer them.

“In Delaware, we not only have the flooding but there is subsidence, or land sinking, as well. This is important where you have installations,” said Sparks. “Will this cause further changes in the whole landform, which can affect military operations? These are some of the questions we hope to answer.”