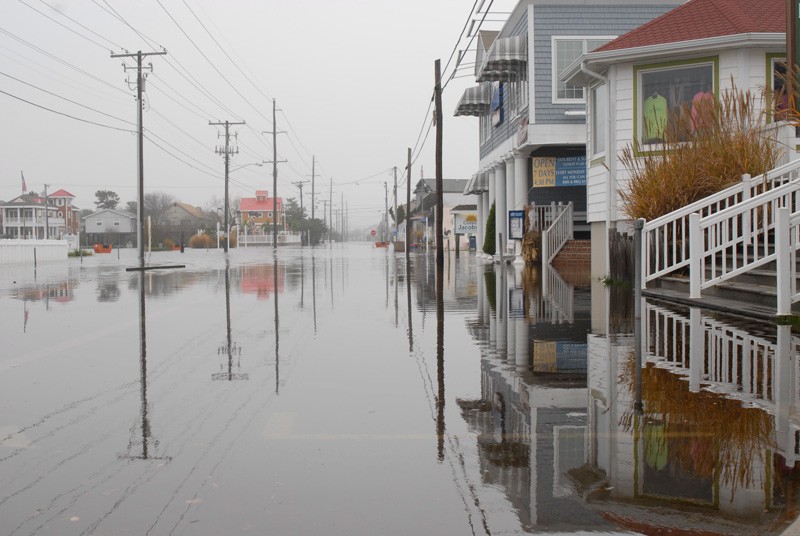 Thanks to the work of core faculty in its Disaster Research Center, the University of Delaware has become one of the leading research universities on issues such as coastal retreat, flood planning and evacuations.

Combining UD’s groundbreaking work with the data and analytical tools of a non-profit research and technology group committed to defining America’s flood risk, the possibilities are endless. UD’s new partnership with First Street Foundation Flood Lab pairs its work and resources with 19 other top universities.

Through the partnership, spearheaded for UD by Assistant Professor A.R. Siders, University researchers will use data and flood risk maps developed by First Street Foundation to examine the effect of state and local land use policies on municipal flood vulnerability, flood-disrupted access to critical infrastructure, and adaptation and flood-risk mitigation equity.

“The Flood Lab creates a space for researchers at different universities to coordinate our research and help us learn from and build on each others’ work,” Siders said. “We all want to help make communities safer and more equitable. With new partners and new data, we can do that more effectively.”

In total, First Street now partners with 90 researchers at 20 universities.

Using cutting edge modeling techniques validated through the peer-review process, the First Street Foundation’s team of best in class data scientists and technologists are working to calculate the past, present and future flood risk of every home and property in the United States. The foundation’s model and resulting data allow world-renowned researchers from the country’s top academic institutions to analyze the economic, fiscal and social impacts of the country’s changing flood risk.

“Expanding our Flood Lab cohort means even greater accessibility to the National Flood Model data and increasingly finding new ways to apply greater understanding to myriad real-world issues,” said Matthew Eby, executive director of First Street Foundation. “We’re committed to working with academic partners across the country to ensure that this data is as widely available as possible.”

UD’s team includes Philip Barnes, Nina David, Andrea Pierce, and Joseph Trainor, all from the Joseph R. Biden, Jr. School of Public Policy and Administration; Rachel Davidson and Shangjia Dong from the Department of Civil and Environmental Engineering; Pinki Mondal from the Department of Geography and Spatial Sciences; Laura Paul, a postdoctoral research fellow with the Center for Experimental and Applied Economics; Siders, from both the Biden School and the Department of Geography and Spatial Sciences; and Greg Dobler, a professor in the Biden School and director of the Urban Observatory.

These researchers have deep expertise in data analysis, remote sensing, flood policy and disasters. Drawing on First Street’s data, they will leverage this to improve their ongoing work. For example, Siders and colleagues plan to expand on their recent study of managed retreat in the United States, drawing on First Street’s data on historic and future floods. “It will let us expand our work to explore how floods affect people and how individual actions and policies can help prevent floods from becoming disasters,” Siders said.

Mondal said she and her team will be using the data to better understand flood vulnerability in urban populations.

Her team’s prior research has shown that population-at-risk estimates can vary significantly based on data choices. Having First Street’s data for similar future studies will be a game-changer, Mondal said.

“As a geospatial data scientist, I have been focusing on understanding nature-society interactions using satellite images. Through this partnership with First Street, a collaborative team at UD would gain access to an impressive dataset on flood risk which would be particularly critical to understand in our almost entirely coastal state.”

Dong, an assistant professor who starts at UD this fall, will mainly be working on analyzing the communities’ accessibility to critical facilities in the face of flooding. He uses a network-based method, which not only provides insights in flooded neighborhoods but also those where residents are isolated due to the “flood island effect.” This occurs when a flood creates a ring and cuts off the access of neighborhoods to critical facilities outside the flood zone, he said.

“This is particularly interesting when putting it into a social vulnerability context, as the subpopulation of a community may have different levels of tolerance to different types of service loss,” Dong said. “The DRC has a great team of disaster science researchers. We will enable a holistic view of the urban flooding problem and provide solutions considering engineering, social and policy aspects of the problem.”

The partnership will have a significant impact in Delaware, given the flooding and sea level rise vulnerabilities that many towns and property owners are facing, Barnes said.

“There is a wide range of topics that can be explored with First Street’s data,” Barnes said. “One is an evaluation of State of Delaware policies that are specifically designed to direct and incentivize property development. We’ll look at whether those state-level policies help to direct and incentivize development away from or toward areas that are vulnerable to flooding and inundation,” Barnes said. “We expect to use the research results to recommend policy changes that better protect future developments and private property from the impact of climate change.”

In addition to accessing new datasets, the partnership has created a new interdisciplinary team at UD.

“The envisioned projects reflect the kinds of innovative interdisciplinary science and analytics we are developing every day at UD,” Trainor said. “I’m looking forward to working with the team Siders brought together, which includes professors I’ve worked with for some time and talented young professors who recently arrived at UD.”

“The assembled team was a major draw,” Barnes added. “We have a diverse set of skills, experiences and perspectives that all point toward an interdisciplinary research effort.”