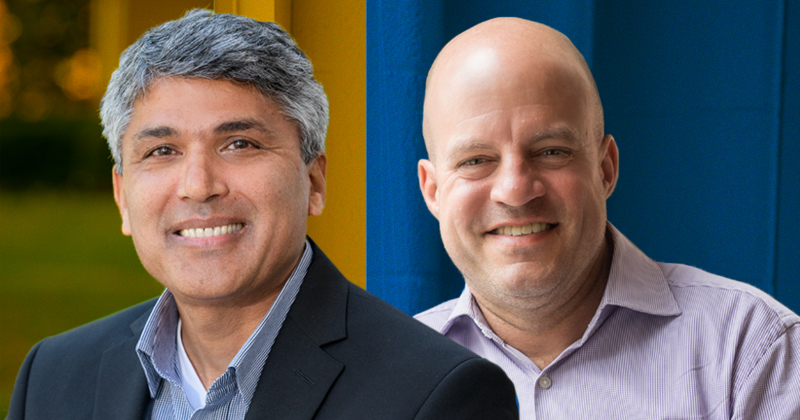 Their terms as chair will remain effective through June 30, 2022.

An Engineering Alumni Distinguished Professor, Prasad’s work with fuel cells and role in developing and directing UD’s Fuel Cell Bus Program have garnered widespread recognition. For eight years, he was the director of the Center for Fuel Cell Research, now known as the Center for Fuel Cells and Batteries. His other research interests include lithium-ion batteries, thermoelectric devices, wind and ocean current energy, solar thermal energy, and connected vehicles.

Pochan also holds appointments in the Delaware Biotechnology Institute and UD’s Department of Chemistry and Biochemistry. Pochan’s research is lauded internationally for the construction of new materials and nanostructures via molecular solution assembly mechanisms. His current work focuses on biomaterials and materials for nanotechnology and energy applications through organic/inorganic hybrids.

Pochan’s honors include an NSF Career Award, the DuPont Young Faculty Award, the Dillon medal from the American Physical Society and fellowship in the American Physical Society and American Chemical Society. He also serves as Editor-in-Chief of Soft Matter, an interdisciplinary journal from the Royal Society of Chemistry in the United Kingdom. He earned a bachelor’s degree in chemistry from the University of Wisconsin, and a master’s and doctoral degree in polymer science and engineering from the University of Massachusetts.