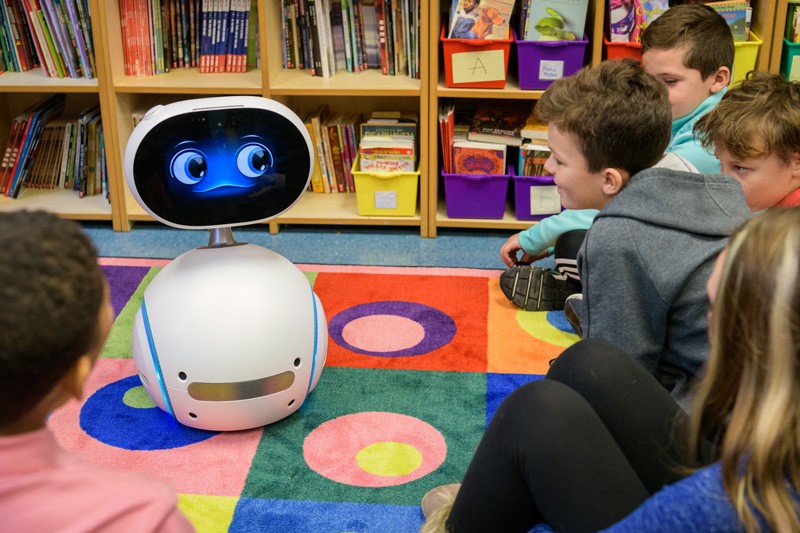 Fifth graders from The College School on the University of Delaware’s Newark campus recently learned important lessons about safeguarding information online from an unusual teacher — Zenbo, the social robot.

Standing more than two feet tall, the cute classroom companion was preprogrammed with familiar children’s stories, such as Little Red Riding Hood, that a team of UD researchers creatively adapted for the digital age.

The idea: to help children learn cybersecurity and good digital citizenship using tools that engage and sustain young attention spans. Digital citizenship focuses on online safety and the ethical and responsible use of the internet.

As Zenbo began reading the story, Little Red Riding Hood was departing to visit her sick grandmother. Her mother reminded Red to safeguard the password required to enter her grandmother’s home. When she encountered the Big Bad Wolf in the woods, Red had to choose whether or not to share private information with a stranger.

Zenbo paused and solicited input from the class of fifth graders about what to do next. On this particular Tuesday, student opinion was split on whether it is okay to share information that could help the wolf figure out the grandmother’s home security password. Half of the students thought it would be okay to share personal information, while their peers considered it a risky move.

“These checkpoints reinforce positive behaviors and create teachable moments for when children make mistakes,” said Chrystalla Mouza, Distinguished Professor in Teacher Education in UD’s College of Education and Human Development (CEHD). “It’s important that this training is provided in school because we cannot rely on it being provided elsewhere.” 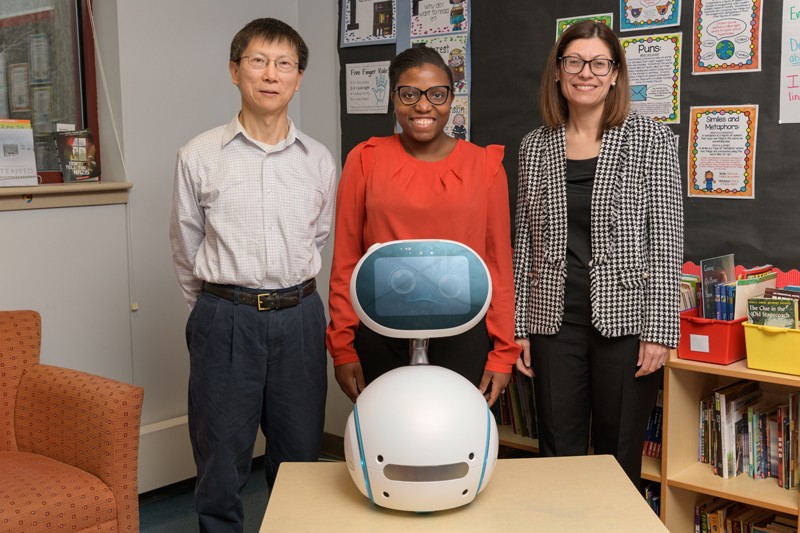 University of Delaware researchers are leveraging an emerging technology known as social robots to test news ways to deliver cybersecurity training in the classroom. The NSF-funded project is a collaborative effort by Chrystalla Mouza, Distinguished Professor in Teacher Education, and Tia Barnes, assistant professor of human development, in UD’s College of Education and Human Development; and Chien-Chung Shen, professor of computer and information sciences in the College of Engineering.

Mouza is collaborating with Chien-Chung Shen, professor of computer and information sciences in the College of Engineering, and Tia Barnes, CEHD assistant professor of human development, on the National Science Foundation-funded project that aims to test news ways to deliver cybersecurity training in the classroom.

The work grew out of Shen’s previous efforts to help establish an academic minor and a master’s program in cybersecurity at UD.  Shen realized that children in kindergarten through 12th grade (K-12) were an overlooked audience for cybersecurity instruction. As internet users across the globe celebrate Safer Internet Day on Tuesday, Feb. 11, it also is an important reminder that cybersecurity education is necessary for more than just adults.

Children ages eight to 12 years old spend approximately six hours per day online, according to a Common Sense Media report. This number jumps to roughly nine hours daily after factoring in the time students spend using technology in the classroom.

Even if they don’t have cell phones, students this age typically have other devices, such as iPads and laptops with internet access. Many children play video games online and, although they have grown up with interactive technology, such as Siri, Google and Alexa, this doesn’t guarantee that children understand how to be safe online.

Mouza and Barnes took K-12 education standards for computing, which include digital citizenship and aspects of online safety, security and privacy, into account when developing the interactive stories. Shen and Yan-Ming Chiou, a computer science doctoral student with an interest in collaborative learning with interactive digital media, then programmed the UD-developed stories, questions and responses into the social robot.

“Children can be easily duped into giving strangers their personal information and passwords because they want to be helpful,” said Chiou. 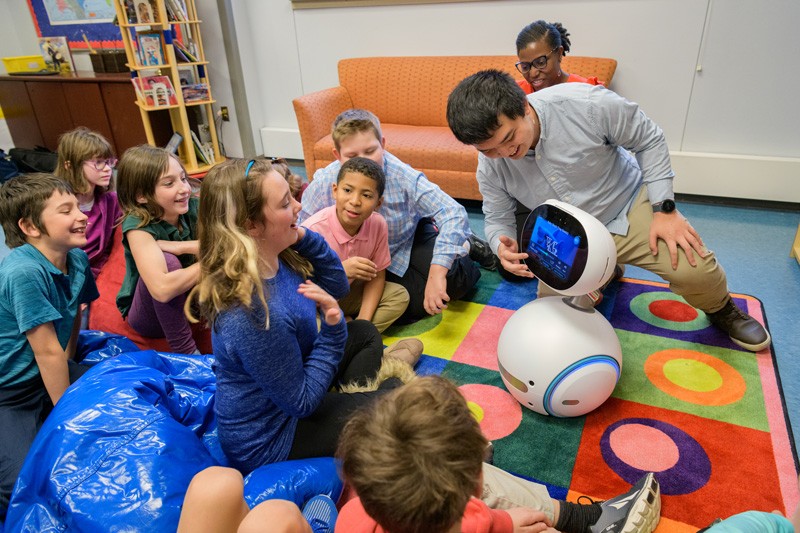 While the adaptation of Little Red Riding Hood focuses on the topic of phishing, Barnes also penned an original story, called Captain Cyber, that introduces friends James and Louisa who are inadvertently whisked into cyberspace while playing an online mobile game. There they meet Captain Cyber, a cyber safety superhero who teaches them about identifying phishing sites and password safety.

Using an off-the-shelf social robot to read the stories to the children is a leap forward over traditional methods, such as having the children watch a video or animation. Previous work in the field has shown that students tend to learn more vocabulary when interacting with a social robot versus watching videos or using other mobile devices because they view it as a learning companion.

“We envision this social robot being one part of the teacher’s strategy and lesson plan, perhaps as a station that students visit or an activity that they complete during class to generate discussion,” said Mouza, an expert in using technology in the classroom.

The children’s responses will provide rich data that the research team can use to measure student knowledge about cybersecurity, and to evaluate the social robot’s ability to help students learn complex concepts. Also, the NSF-funded initiative complements existing nationwide efforts Mouza and others on campus are involved with, such as CSforALL, a program that aims to engage students from kindergarten through high school in learning computer science and encourage them to pursue careers in it and related fields.

According to Mouza, research shows that children typically decide around fourth or fifth grade whether they belong in careers in science, technology, engineering and math (STEM).

“So, reaching them early with cybersecurity training is actually very important,” she said.

In Taiwan, Zenbo the social robot is being used to monitor the elderly, take attendance in kindergarten and act as a receptionist.

The social robot has a cute face, moves and can even be programmed to smile. Built-in sensors enable Zenbo to understand its environment. As Zenbo prepared to read the story, the robot recognized that it was on top of a table and said, “Help, I’m about to fall, someone please move me to a safe location,” eliciting giggles from everyone in the room.

Barnes said she hopes Zenbo can be leveraged to augment social emotional classroom instruction for children with disabilities. For example, a teacher might employ Zenbo to help children with autism or emotional learning difficulties practice social skills and explicitly experience social situations that they might encounter in real life.

“Having a robot work one-on-one with a child can deliver important support outside of what a teacher or paraprofessional can provide in the classroom,” said Barnes, who also is a senior researcher with the Center for Research in Education and Social Policy. “This can help children learn and practice appropriate behaviors and responses.”

The research team plans to pilot Zenbo and the UD-developed stories, which they tested with teachers, in classrooms in spring 2020. Future iterations of the UD project could expand beyond social robots to include virtual reality (VR) that would enable children to not only learn from the stories, but to become characters within the virtual environment and role play the story using VR goggles, possibly even helping to teach their peers.

“Technology is advancing, so the framework, methodology and philosophy needs to adapt to keep children interested,” Shen said.

This work is funded through a grant from the National Science Foundation (NSF award #1821794).

Article by Karen B. Roberts | Photos by Evan Krape | Video by Ally Quinn