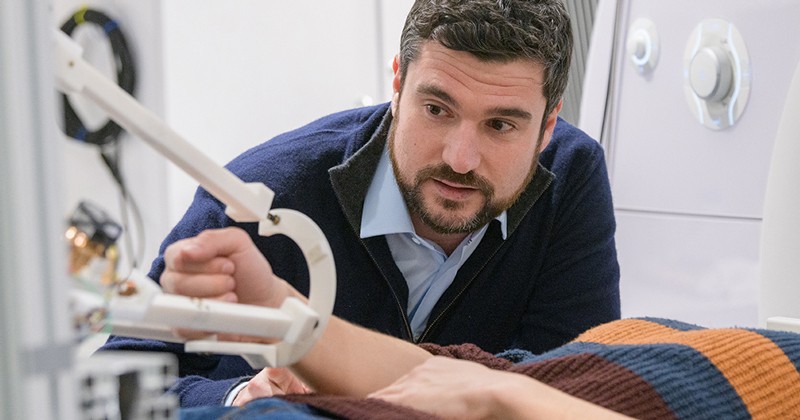 Fabrizio Sergi, an assistant professor of biomedical engineering at the University of Delaware, has received a National Science Foundation (NSF) CAREER award to support fundamental research in motor control that could in the future improve practices in neurorehabilitation for individuals with motor impairment.

With the five-year award, which began on Jan. 15, 2020, Sergi will use magnetic resonance imaging (MRI) to study how the human brain and body respond to interactions with robotic devices.

For the past decade, since Sergi was a doctoral student at Università Campus Bio-Medico di Roma in Italy, he has developed new robots and tools to elucidate the physiology of human motor control, the body’s regulation of involuntary and voluntary movements.

This work is important because movement disorders, which can limit a person’s voluntary movements or cause involuntary movements, can be difficult to treat and cause significant burdens on quality of life. Motor difficulties affect patients with a variety of diagnoses, from stroke to Parkinson’s Disease to dystonia and more.

Sergi has created a niche area by developing MRI-compatible robots to study how human brains and muscles work during natural and effortless movements. Many robots used in medical research can’t be used with an MRI machine, making it difficult to study brain activity during their use. However, Sergi is a world leader in developing robotic tools that are compatible with MRI imaging techniques. For example, he has developed a wrist-controlled robotic device that can be controlled like a joystick. While the user moves the device and responds to actions applied from the robot, their brain is scanned by the MRI machine, revealing new insights about what drives movements during human-robot interaction. 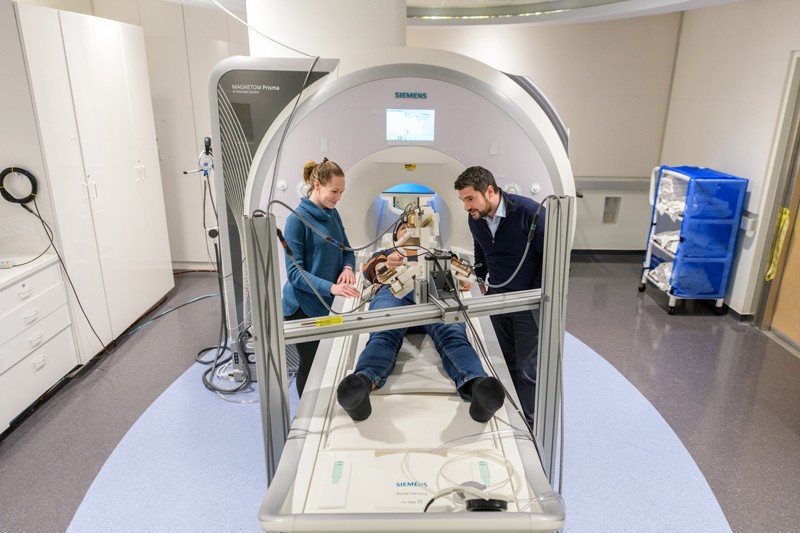 Fabrizio Sergi (right) has created a niche area by developing MRI-compatible robots to study how human brains and muscles work during natural and effortless movements. Many robots used in medical research can’t be used with an MRI machine, making it difficult to study brain activity during their use.

By developing a better understanding of movements even in healthy subjects, Sergi and experts can figure out robot-based interventions to help those with movement disorders.

This insight is much needed because, currently, there is a poor fundamental understanding of how exactly the human brain and muscles interact with robots during robot-assisted motor tasks. Most studies on human physiology are focused on the humans themselves, but when you’re studying how humans work with robotic devices, it’s more complicated.

“There are additional neuromuscular mechanisms that we use to control interaction with active agents, such as co-contracting our muscles, or relying on fast reactive responses (also called reflexes), but these processes have not been studied in the context of human-robot interaction,” said Sergi.

The CAREER award from NSF recognizes the extraordinary potential of Sergi’s research focus.

“The proposed work is ambitious and quite multi-disciplinary, as it combines computational models with the analysis of muscle and brain function,” said Sergi.

This project will also provide training for undergraduate and graduate students in biomechanics, neuroscience, and robotics. In addition, Sergi and students will use what they learn to develop a computational model to be used in a new outreach program to middle school and high school students that introduces gaming within the context of neuromuscular modeling.

Ultimately, by helping experts develop an improved understanding of how humans and robots interact, Sergi and his students are paving the way for personalized robotic devices people could someday use to recover from neurological injuries that affect motor function. 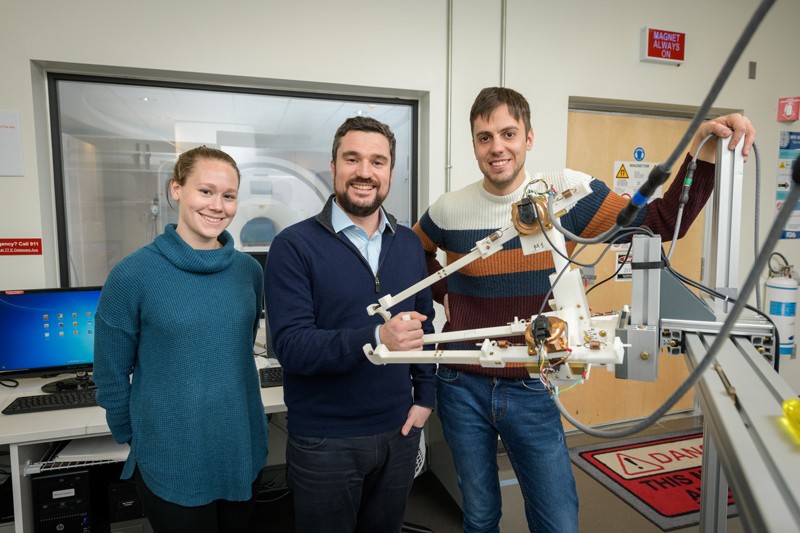 Prof. Fabrizio Sergi (center) is joined by Andria Farrens (left) and Andrea Zonnino, both of whom are doctoral students in biomedical engineering.

Stroke survivors, who often have lingering motor difficulties, could particularly benefit from Sergi’s research. In recognition of this potential, the National Institutes of Health (NIH) recently awarded Sergi a grant to develop a new technique to study brainstem activity during long-delayed reflexes, a technique named “stretchfMRI”.

As part of this technique, Sergi has developed a new robot, the MR-StretchWrist, that is used to apply fast perturbations to generate fast muscle responses for analysis. “The key novelty element of stretchfMRI is that we were able to combine the robot, used to stretch wrist muscles, with measurement of stretch-evoked muscle responses using surface electromyography obtained simultaneously with MRI,” said Sergi. Surface electromyography is a non-invasive technique that records electrical impulses.

Previously, researchers could not measure stretch-evoked surface electromyography signals during MRI because of excessive noise — or irrelevant measurement — induced by the scanner. Sergi’s group has developed a new set of electrodes that measures signal from the muscles as well as noise from the MRI. Then, they used machine learning to learn the best subtraction between the signal and the noise.

This work could help to address the problem of spasticity, specifically, in stroke patients.

“While this is a very common condition after stroke, it is still poorly understood in terms of the neuromuscular pathways that contribute to it,” said Sergi. “And it is possible that a tiny brain area in the brainstem, the reticular formation, is crucial to understanding post-stroke spasticity.”

However, researchers have not been able to measure this well nor assess the brainstem in real time during movement.

This information could also be useful for post-stroke assessment and rehab.

“We are still early in the process. In fact, our grant is to develop and validate a new technique. However, we hope that stretchfMRI can become a new tool useful for basic science purposes and perhaps in the future in the clinic,” said Sergi.

Sergi is part of a growing cohort of experts in neuroengineering and rehabilitation at UD. He is the third NSF CAREER award winner in the Department of Biomedical Engineering’s 10-year history.

Dawn Elliott, Blue and Gold Distinguished Professor and chair of the Department of Biomedical Engineering, has established the department as a powerhouse in research and education with unrivalled expertise in multiple areas, including neuroengineering and rehabilitation.

“With MRI-compatible robots, Fabrizio is tackling important, unsolved engineering problems and developing solutions with the potential to benefit countless people who have neurological disorders,” said Elliott. “UD biomedical engineering’s early-career faculty are emerging as leaders in their fields.”