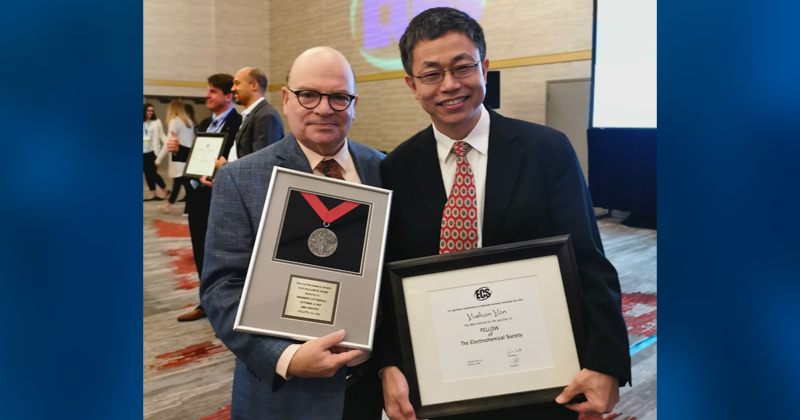 Shimshon Gottesfeld, an adjunct professor of chemical and biomolecular engineering and a member of the Center for Catalytic Science and Technology at the University of Delaware, received the 2019 Olin Palladium Award from the Electrochemical Society (ECS) at the 236th ECS meeting, held from October 13 to 17, 2019.

The Olin Palladium Award was established in 1950 for distinguished contributions to the field of electrochemical or corrosion science. It is considered the highest award given by ECS. Past winners include world leaders of the science and technology of electrochemistry, including 2019 Nobel Prize winner John Goodenough, Virginia H. Cockrell Centennial Chair in Engineering at the University of Texas at Austin.

For Gottesfeld, who joined UD in 2015 after more than 35 years as a pioneering fuel cell researcher in government labs and industry, the award was a great honor.

“To be identified as belonging to this list of scientists, is, for me, the highest possible recognition by the community of electrochemists, within the ECS and beyond,” said Gottesfeld.

The Olin Palladium Award recognizes the highly successful research and development work by Gottesfeld and many of his colleagues who worked on the science and technology of polymer electrolyte fuel cells (PEFCs) over the last 35 years. Gottesfeld has been a professor at the University of Tel Aviv, a fuel cell program leader and a laboratory fellow at the Los Alamos National Laboratory, and a cofounder and chief technology officer of CellEra.

“I feel that I receive this award on behalf of the PEFC R&D community and am thankful for having been selected to represent this community,” said Gottesfeld.

Fuel cell science and technology has always intrigued Gottesfeld, especially because fuel cells can serve as power sources for zero-emission electrical vehicles. The specific type of fuel cell selected in the 1980s for the powering of electric vehicles has been the polymer electrolyte membrane fuel cell (PEFC). This cell operates at cell temperatures under 100 degrees Celsius, enabling fast cold-start and has the important advantages of high power density, high efficiency and, zero tail pipe emissions.

In the mid-1980s, when Gottesfeld started working as member of the Fuel Cell R&D Team at Los Alamos National Laboratory, PEFC technology was immature, particularly so for automotive applications. The PEFC at that time reached power density levels 10 times too low than what would be required for powering an electric vehicle, and the cost per kilowatt of output power was 100 times too high for automotive market entry.

“Overcoming the large power and cost barriers on the way of PEFC technology to the point of market entry required an interdisciplinary effort involving several fields of science and engineering,” said Gottesfeld. “Among these fields, electrochemical science and engineering have had the highest impact, particularly the specific areas of electro-catalysis (catalytic surface processes in the electrochemical cell), ion-conducting polymers and, gas and water transport processes in micro-porous carbon structures.”

Gottesfeld has worked in electrocatalysis and electrochemistry since the early 1970s. When he joined Los Alamos National Lab in the 1980s, he felt fortunate to be able to use his expertise in the development of a novel, green power source.

“I feel my strongest contribution overall has been in the category of ‘understanding,’ i.e., in the diagnostics, evaluation and interpretation of the wide range of chemical and physical processes taking place in the fuel cell,” said Gottesfeld.

He is a co-inventor on 45 patents—a testament to his ability to solve problems while leading teams of scientists and engineers to achieve significant targets in fuel cell research and development.

The future of fuel cells

Gottesfeld aims to further advance the role of fuel cells in providing solutions for a cleaner, greener and cooler globe.

“At this point in time, an important barrier to wide introduction of fuel cell electric vehicles is the lack of infrastructure for the alternative fuels required for fueling these vehicles,” he said. “Solutions have been pursued to a degree, including hydrogen produced from renewable resources and distributed as highly compressed gas or, resolving the storage and distribution of hydrogen by use of a liquid ‘hydrogen carrier,’ e.g., liquid ammonia. However, technical and cost barriers remain.”

Both projects make use of an hydroxide exchange membrane that was developed at the University of Delaware and is now being further developed by the spin-off company W7Energy.

A partnership to advance fuel cells

Yushan Yan, the Henry B du Pont Chair in Chemical and Biomolecular Engineering at the University of Delaware and a new Fellow of ECS, introduced Gottesfeld before the presentation of the Olin Palladium Award.

Yan does research with Gottesfeld at UD and praised the influence of his work. “In the polymer electrolyte membrane fuel cell community, there are only two groups of people: those who have read Shimshon’s papers and those who will,” said Yan.