Home » Leading the Way in Biopharmaceuticals

Leading the Way in Biopharmaceuticals 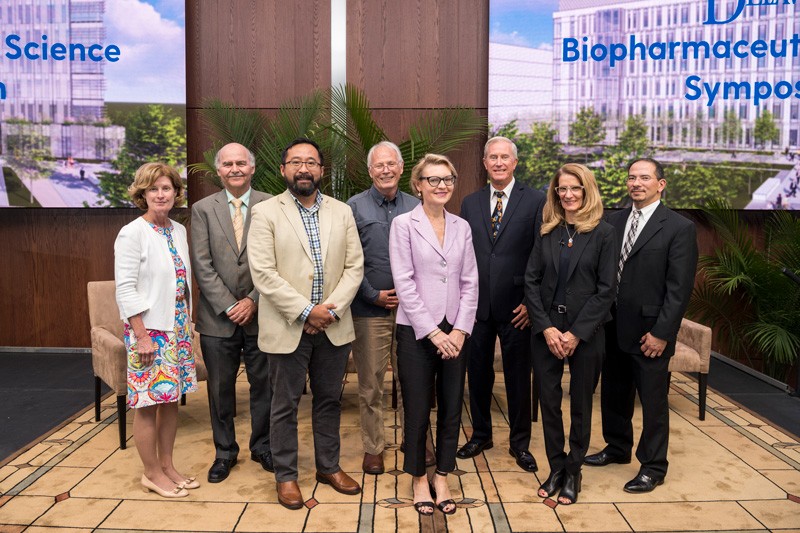 The tremendous potential of the emerging class of medicines known as biotherapeutics — medicines produced from living cells — is exciting new terrain for researchers, industry and health care professionals.

Getting new drugs from the lab to the market remains a significant challenge, however. The discovery is difficult because, despite new biological insights and technological advances, the mechanisms of disease are still poorly understood. The delivery is formidable because complex diseases often require complex therapies. They must be effective, affordable to patients and a worthwhile investment for manufacturers.

Ensuring safe, reliable manufacturing is a big problem that drives the high cost of these therapies.

Thought leaders working at this nexus of discovery and delivery recently gathered at the University of Delaware’s Science, Technology and Advanced Research (STAR) Campus to discuss how academia and industry can better partner to advance solutions to disease. The event was hosted by the Delaware Biotechnology Institute (DBI), a public-private initiative based at UD that offers expertise and facilities in bioinformatics, bio-imaging, DNA sequencing and genotyping.

UD Provost Robin Morgan called the University an “ideal place to have this conversation and do this work,” noting DBI’s long history of interdisciplinary science and UD’s strong commitment to biopharmaceuticals as the headquarters of the U.S. Department of Commerce’s National Institute for Innovation in Manufacturing Biopharmaceuticals, or NIIMBL, which is a national partnership of 120 universities, community colleges, corporations, government agencies and nonprofit organizations. NIIMBL is one of 14 Manufacturing USA institutes focused on fundamentally advancing U.S. competitiveness in key industries.

The meeting was designed to expedite the connection between researchers and industry, inspire future collaboration and give students access to front-line leaders in this growing field. Participants heard from pioneering researchers and leaders from major pharmaceutical firms, with ample time for questions.

Biopharmaceuticals hold great promise in treating cancers and autoimmune or inflammatory disorders, such as rheumatoid arthritis and Crohn’s disease.

“Biotechnology has made the impossible possible for patients,” said Gail Wasserman, senior vice president at AstraZeneca. She noted  that the industry has long been focused on treating disease, but with biologic drugs, now is shifting to curing disease.

And the use of these drugs is expanding quickly. Irene Rombel, senior director and head of strategic analysis at Janssen Pharmaceuticals, said seven of the 10 top-selling drugs in 2018 were biologic medicines.

But the biopharmaceutical industry is still relatively young, created from scratch over the last 30 years. A big question in the field now is how to scale up new therapeutic options when cost and accessibility present ongoing challenges. Big data, analytics, more opportunities to keep up with rapidly changing technology and increased collaboration among disciplines are all expected to play a role in providing much-needed answers. A spirit of partnership, looking for ways to bridge the gap between basic research and applied solutions for industry, will be needed, too.

An early leader in biotherapeutics, Anthony Kossiakoff understands this better than most. The UD alumnus, who earned his doctoral degree in physical chemistry in 1972, started his career at Brookhaven National Laboratory and went on to become a pioneering member of the biotechnology corporation Genentech, Inc. Today, Kossiakoff conducts innovative research supporting academic-industrial collaborations at the University of Chicago, where he serves as chair of biochemistry and molecular biophysics.

“I’ve seen it from both sides,” he said.

Woven into the detailed discussions of science were other gems that could inform just about any human endeavor.

For example, when asked what he was most proud of in his career as a scientist, Doug Nesta, senior director at GlaxoSmithKline, said, “The resilience to keep doing it. Failure is your closest shadow. We experience a lot less of success than we’d like to.”

The motivation to help patients is a powerful driver, he said, and resilience helps researchers move forward despite many setbacks. That hit home for Sam Keating of Silver Spring, Md., a graduate student studying bioinformatics and computational biology in Professor Prasad Dhurjati’s lab.

“Life is all about what you make of it, not what it hands you,” said Keating, adding that his work was slowed by health problems that emerged in 2016. “That’s the process of life.”

He appreciated, too, the discussion around the intersection of discovery and industry.

“You might like to move forward with a drug only to learn it can’t be manufactured for some reason,” Keating said. “Years and millions of dollars go into that. It’s something you have to think about early on — not only the discovery, but the development. You need something to show for it in the end, something more than a paper, something physical.”

Bridget Aylward, a doctoral student studying animal and food sciences with a focus on immunology, attended to learn what jobs might be available after graduation, but quickly found herself absorbed in the discussion of science.

“I was particularly fascinated by conversations around monoclonal antibodies and the use of immunology, or the body’s own processes, to make new drugs,” Aylward said.

Reddy Perumalla, founder and director of Seven Star Pharmaceutical Services, a contract research organization based in Wilmington, Delaware, was there for just that reason.

“Right now, I’m providing services in the small-molecule area,” he said. “I want to learn what’s going on in biopharmaceuticals and do some networking.”

Creating opportunities for this type of accidental and intentional interaction is exactly the point of ongoing development at UD, particularly on STAR Campus, according to Charles G. Riordan, UD vice president for research, scholarship and innovation.

In particular, Riordan said, UD is working to advance areas related to innovation and entrepreneurship for the benefit of students, faculty and staff but also for the broader community and to spur economic development in Delaware. Underpinning these efforts is the University’s steadfast commitment to diversity, equity and inclusion and desire to create opportunities for deeper collaboration with industry in order to drive forward solutions to challenges facing society.

“We are committed to ensuring that our communities reflect the state and the broader world in which we live,” he said. “The problems we are all trying to address globally and collaboratively are some of the most pernicious and challenging problems our society has ever faced. Bringing together diverse groups is something we value at UD.”

Riordan pointed to DBI as an early example where core facilities and public-private partnership have enabled scientists to conduct transformative research both at UD and throughout Delaware. These core facilities, he continued, will soon be available on UD’s STAR Campus when DBI moves to the Ammon Pinizzotto Biopharmaceutical Innovation Center in 2020.

NIIMBL will be there, too, providing research and development to accelerate biopharmaceutical manufacturing nationally, alongside related UD research thrusts in biomedical engineering, medical molecular sciences and chemical synthesis that will synergize with DBI’s existing strengths in agricultural biotechnology and bioinformatics. Nearby, the Chemours Discovery Hub will house the chemical company’s central research and development function.

Meanwhile, activity at the Delaware Innovation Space, Inc., a public-private partnership involving UD, DuPont and the state of Delaware, is helping startup companies — some of which have grown out of UD research — to scale their innovations beyond UD’s campus.

As the need for biotherapeutics continues to shift the paradigm of patient care, the demand — and opportunities — for trained professionals with different skill sets is expected to grow. Scientists with expertise ranging from biology, chemistry, material science and engineering to toxicology, genetics, medicine and more will be needed for careers in drug discovery, translational science, bioanalytics, product development, data science and bioinformatics, to name a few.

Preparing the 21st-century workforce is a key part of the work and public-private partnerships will continue to expand the rich training ground already in place at UD, helping to position students for success in the job market.

Erika Wachs, a UD alumna who works in business development at W.L. Gore and Associates, Inc., noted that today’s biopharmaceuticals industry is an interdisciplinary melting pot of people who originally trained in other disciplines. While Wachs is a trained chemical engineer and materials scientist, others come from mechanical engineering, chemistry, biology and more.

“But now there are more degrees tailored specifically for biopharmaceuticals. It will be interesting to see how this unfolds in industry,” she said.

Rombel advised students in the audience to be prepared for things to continue to change.

“Read broadly, learn about other aspects of science, and beyond science to industry, socioeconomics and other things that have an impact on what we do. Be hungry to learn and adaptable. Most important, be a critical thinker and don’t accept everything you are told at face value,” she said.

Approaching this with an entrepreneurial mindset, she went one step further, adding, “In industry, the motto is ‘fail fast in order to succeed fast.’ ”

In closing remarks, Provost Morgan thanked the day’s speakers for using their vision, persistence, adaptability and patience to create much more than medicine.

“You are developing another important product, which is hope,” Morgan said.

Article by Karen B. Roberts