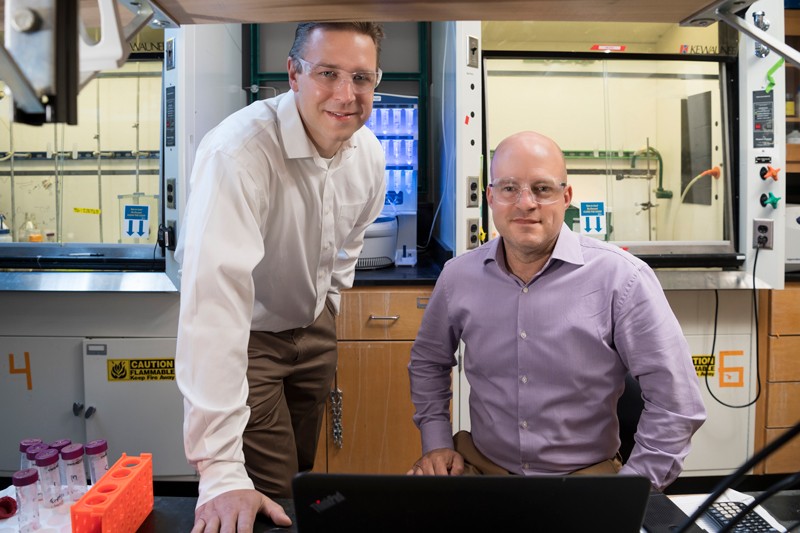 From tires to clothes to shampoo, many ubiquitous products are made with polymers, large chain-like molecules made of smaller subunits called monomers, bonded together. Now, a team of researchers from the University of Delaware and the University of Pennsylvania, with primary support from the U.S. Department of Energy Biomolecular Materials Program, has created a new fundamental unit of polymers that could usher in a new era of materials discovery.

The researchers designed and created rigid, self-assembling, customizable polymer chains by linking together new building blocks called bundlemers — a term coined at UD. They recently described their work in the journal Nature.

To create bundlemers, the team assembles four individual peptides, themselves short chains of amino acids, into nanoscopic cylinders. The bundlemer cylinders are then linked together, end-to-end, through a highly efficient and controlled series of chemical reactions known as “click” chemistry. The resulting polymer chains are rigid, rod-like molecules that are based in biology yet do not exist in nature. Bundlemer chains can then be modified with components such as synthetic polymers or inorganic nanoparticles to create new hybrid nanomaterials.

“There’s a basic premise in materials that if you can control function and structure, then you can essentially build anything,” said Chris Kloxin, study author and assistant professor of materials science and engineering and chemical and biomolecular engineering at UD. “We have a very well-defined structural unit, this bundlemer, upon which we have the ability to add chemical functionality at any location.”

Because of their rigidity and customizability, bundlemers could be used to design new materials with a wide range of applications, from high-performance fibers to single-use plastics to biologics, medicines that employ biological components instead of traditional chemistries. Biopharmaceutical research and development is a growing area of expertise at UD, home to the National Institute of Innovation in Biopharmaceutical Manufacturing (NIIMBL).

The rigidity of bundlemers could also make these materials useful as substitutes for famously strong materials such as the steel in bridges, the silk in parachutes or the Kevlar in bulletproof vests.

Practically every day, co-author Darrin Pochan, chair of the Department of Materials Science and Engineering at UD, and Kloxin come up with a new application to pursue — enough to keep them and their students busy for years.

“Our idea is that these bundlemers truly are building blocks in every sense of the word,” said Pochan. “We are going to build many, many materials and technologies out of these building blocks.”

The team has applied for one patent and plans to file more.

Pochan and co-author Jeffery Saven, professor of chemistry at Penn, have collaborated since 2012, when they received a National Science Foundation DMREF grant to study designer materials. Kristi Kiick, Blue and Gold Distinguished Professor of Materials Science and Engineering, was also a collaborator on that project.

Saven’s computational chemistry group designs and models specific peptide sequences to identify promising candidates for synthesis and characterization. “Our group is involved in designing and identifying what to make, then modelling these systems to try to understand their stability,” Saven said about his group’s role in the collaboration.

Saven collaborates on new molecule designs with Pochan and now Kloxin, who joined the collaboration later, where they discuss the pros and cons of different peptide sequences and how to best create a new material with a specific property. Then, at UD, Pochan and Kloxin make the materials.

“It’s good to have feedback on important features to include in the calculations,” said Saven about the importance of iterative discussions between groups at UD and Penn.

Said Pochan: “We computationally design and then experimentally create the molecules to do the assembly into the bundlemer building blocks. We are not limited to nature’s toolbox.”

Still, despite careful planning, the initial experimental results surprised Pochan and Kloxin — in a good way. When they first saw measurements of the bundlemer chain stiffness, they assumed that something was wrong. Usually polymer chains are loose and flexible like spaghetti, but polymers created from bundlemers are more like long, thin, sturdy rods.

“The rigidity was quite surprising and stunning,” said Pochan. It wasn’t a mistake. Additional testing revealed that bundlemers have a much higher stiffness by weight than almost any other polymers, such as synthetic polymers and DNA.

After synthesizing bundlemers, the research team characterized the materials using transmission electron microscopy and cryogenic transmission electron microscopy in the Keck Center for Advanced Microscopy and Microanalysis. They also confirmed the size and structure of the bundlemers through small-angle neutron scattering experiments at the National Institute of Standards and Technology’s Center for Neutron Research, which has a cooperative agreement with UD for the Center for Neutron Science.

“These are tools for anybody to use, whether you’re a chemist, engineer, or physicist,” said Darrin Pochan (right), chair of the Department of Materials Science and Engineering at UD. “It’s hard to think of an equivalent material or experimental tool people use widely. It’s like a toolbox for anybody to design future things.”

Jeff Caplan, confocal microscopy expert and director of BioImaging at the Delaware Biotechnology Institute, performed Stochastic Optical Reconstruction Microscopy (STORM) Imaging to visualize tiny segments within the bundlemers. Caplan is a co-author on the Nature paper.

This project wouldn’t have been possible without the complementary expertise of the principal investigators. Saven excels in computations and theory. Kloxin excels in polymer chemistry. Pochan excels in materials synthesis and characterization.

“We have plenty of overlap with our expertise, but the point is that without one of us, none of this would have happened,” said Pochan. “Without facilities, such as UD’s Keck Microscopy Lab, the BioImaging Center at the Delaware Biotechnology Institute, and our relationship with NIST and the Center for Neutron Research, this kind of work would not happen.”

Next, the team aims to make bundlemers more accessible, easier to synthesize, and scalable.

Scientists around the world could use bundlemers to address a wide variety of grand challenges in engineering.

“These are tools for anybody to use, whether you’re a chemist, engineer, or physicist,” said Pochan. “It’s hard to think of an equivalent material or experimental tool people use widely. It’s like a toolbox for anybody to design future things.”