Catalysis in the Spotlight 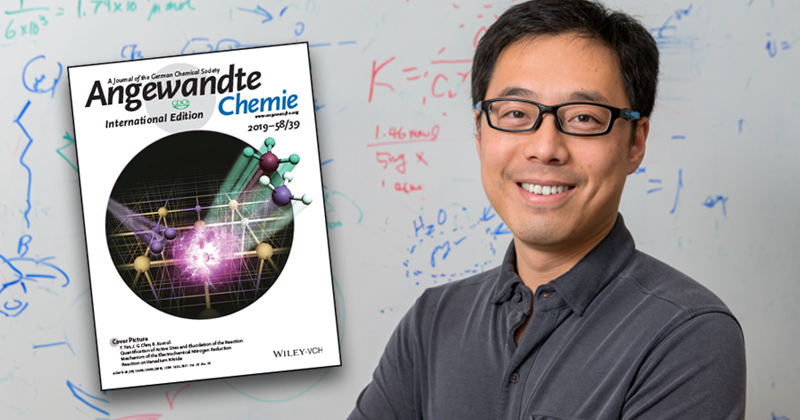 A new paper by researchers at the University of Delaware’s Center for Catalytic Science and Technology appears on the front cover of the September 23, 2019 edition of Angewandte Chemie, a leading journal in the field of chemistry and chemical engineering.

In the paper, UD researchers and collaborators from Brookhaven National Laboratory and Columbia University reveal how they quantified the active sites and elucidated the reaction mechanism of the electrochemical nitrogen reduction reaction on vanadium nitride.

“The primary contribution of the current work is that we developed a method called isotopic exchange to quantify the density of active sites during the electrochemical nitrogen reduction reaction,” said study author Bingjun Xu, Centennial Development Professor of Chemical and Biomolecular Engineering. This enables researchers to compare the activities of individual sites during electrochemical nitrogen reduction reactions.

As electrochemists, Xu and collaborators aim to develop the most active and selective catalysts possible. To do so, they need to compare materials with drastically different compositions and structures, a task that can be quite challenging. “One gram of this and one gram of that could have different densities of active sites, so it is critical to make an apples-to-apples comparison, and this is a method to achieve this goal for this reaction,” said Xu.

The team used isotopic exchange, employing two versions of the element nitrogen with differing physical properties: nitrogen-14 and nitrogen-15. They used one type of nitrogen in the reactant and another type of nitrogen on the catalyst. After the reaction, they were left with a mixture. They determined the composition of the mixture and then back calculated to draw conclusions about the active sites.

While this work is fundamental, the applications could be widespread.

“Electrochemical nitrogen reduction is an active field right now because of its potential of turning nitrogen directly to ammonia on site and on demand,” said Xu.

Ammonia is the key ingredient in fertilizers used to grow the foods that make up our daily diets. Today, ammonia is produced in massive factories, but a growing field of research is dedicated to making ammonia easier to produce on a local scale.

Nitrogen, a key part of ammonia production, is everywhere, and so is sunlight, an important source of electricity.

“Electricities could be harnessed anywhere that has a clear view of the sky so that we could potentially make fertilizers on site,” said Xu. Now, ammonia is made in centralized facilities, using natural gas, and shipped across the country. On-site electrical ammonia production would reduce this natural gas usage and fuel usage to transport the product.

Electrochemists such as Xu are working on materials to enable next-generation ammonia production. “The majority of the field right now is developing different materials that are very difficult to compare, said Xu. “We established a framework to do that so that the field could, in the future, use this method to identify the structures that are really active and try to increase the density of those.”

In addition to Xu, the paper’s authors include:

The research was supported by the U.S. Department of Energy.