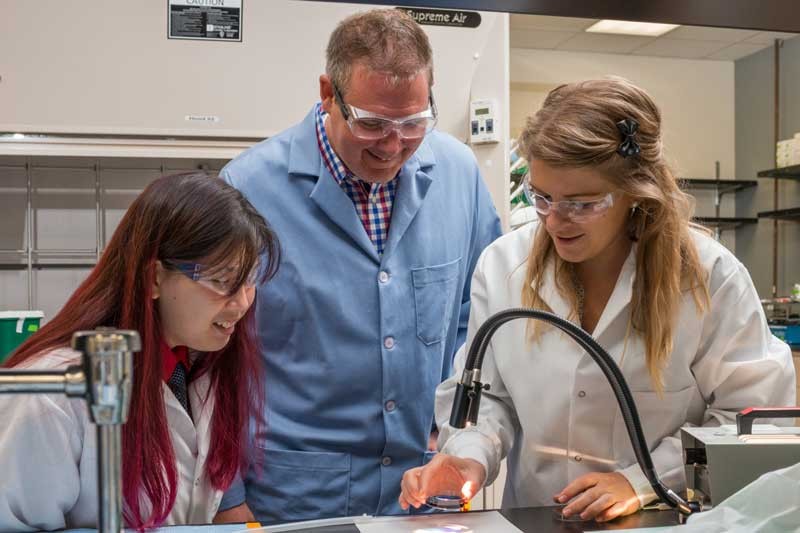 A University of Delaware-led network of higher education and healthcare institutions will receive $23 million in federal and state funding over the next five years to further grow opportunities for multidisciplinary biomedical research in Delaware.

For the last 15 years, the Delaware INBRE program has worked to build a collaborative statewide biomedical research network with the goal of improving disease outcomes, building a diverse and educated workforce and driving economic growth for the state of Delaware.

This fourth program award, providing $18 million from the National Institutes of Health and $5 million in matching funding from the state, will continue efforts to build research capacity in Delaware with a focus on reducing the logistical and geographical challenges that have arisen as the Delaware’s research network has grown.

“Delaware is a state of partnerships, so it is critical to build and sustain research and education relationships through networks like Delaware INBRE to fuel innovations in healthcare and help improve the health of people throughout our state and around the world,” said UD President Dennis Assanis. “These programs are creating a stronger biomedical research community in Delaware while helping to train our students to be the next generation of researchers and healthcare practitioners.” In 2017, the network expanded to include three affiliated institutions — Wilmington Veterans Affairs Medical Center, Wilmington University and Delaware BioScience Association — that are working with Delaware INBRE to develop their own research infrastructure to provide mentored research opportunities for undergraduate students and workforce development.

“The Delaware INBRE program builds on significant experience at UD in conducting collaborative, multidisciplinary research programs,” said Steven J. Stanhope, associate vice president for research, who serves as principal investigator of the Delaware INBRE program. “As our network expands we have experienced a dramatic increase in the number and breadth of collaborations among researchers and institutions. This highlights our successful efforts leveraging Delaware’s dynamic biomedical research network to advance our biomedical research capabilities.”

Delaware is one of 23 states and Puerto Rico that receive INBRE funding through Institutional Development Award (IDeA) grants, which aim to increase research opportunities in geographic areas with historically low levels of funding from the NIH. The IDeA program also funds three active Center for Biomedical Research Excellence (COBRE) in cardiovascular health, biomaterials and therapeutics discovery as well as the Delaware Center for Translational Research ACCEL program, which received a $25 million renewal last year.

“INBRE is one of the alphabet soup of funding mechanisms from the NIH Institutional Development Award (IDeA) program that is transforming human health research and patient care across the state,” said Charles Riordan, vice president for research, scholarship and innovation at UD. “Over the past two decades, the IDeA program has had an economic impact in Delaware of nearly a half-billion dollars.”

While Stanhope serves as principal investigator, Cathy Wu, Unidel Edward G. Jefferson Chair in Engineering and Computer Science and director of the Data Science Institute, serves as program coordinator for the Delaware INBRE.

During the summer of 2019, 81 students are getting undergraduate research experience through Delaware INBRE, working with academic and clinical mentors in the INBRE network and even in Vermont, thanks to a partnership with Vermont INBRE.

For most, it’s their first exposure to working in a lab or conducting research, and the experience can be invaluable. During the summer of 2018, four Delaware INBRE Summer Scholars were co-authors on journal articles with their mentors. Past INBRE Summer Scholars have been awarded the prestigious Graduate Research Fellowship Program from the National Science Foundation.

This is the second summer Alissa Strouse is spending as a Summer Scholar in the Human Performance Lab, part of the Department of Kinesiology and Applied Physiology. Strouse, an exercise science major, was part of UD’s Associates in Arts program when she started last year as an INBRE Summer Scholar. Now enrolled in Newark, she has continued her research endeavors with the goal of attending physician assistant school in the future.

“Being funded through INBRE to do research has opened so many doors for me,” said Strouse, who was invited to work in other KAAP labs after her first summer of undergraduate research. “I have developed stronger clinical, research and lifelong skills, all stemming from my first summer through INBRE. I would not have the opportunities I am given today if I hadn’t apply these last two years.”

“Workforce is an issue in a tight job market,” Stimson said. “Having well-trained students accelerates progress in clinical and industrial settings, which creates business growth and opportunity.”

It’s not just students who have benefited from INBRE’s resources. In the past five years, more than 1,000 researchers and clinicians have received support from the Delaware INBRE program in the form of core access awards for specialized equipment use, participation in local symposia, travel grants and funding for pilot projects.

John Slater, an assistant professor in the Department of Biomedical Engineering, received one of his first grants from Delaware INBRE and used it to develop a new technology. His technology, image-guided laser-induced hydrogel degradation, allows for the generation of 3D microfluidic networks in polyethylene glycol-based hydrogels (PEG).

From the results generated by his INBRE funding, Slater went on to receive several other larger grants, including a National Science Foundation Career Award in 2018.

“This technology is now a standard tool in my lab and we are using it to investigate how cancer cells extravasate during metastasis and the role of microstrokes in neuronal damage as well as developing new products through industrial collaboration,” said Slater, who has published three papers showcasing this technology. “Without funding through INBRE this technology might still be an idea and not a reality.”

Megan Wenner, an assistant professor in the Department of Kinesiology and Applied Physiology, credited the professional development programs offered by Delaware INBRE, COBRE and the ACCEL program with helping early-career investigators to better understand the federal research landscape. She recently received $2.29 million in NIH funding for a project looking at blood vessel function in women across the lifespan.

“I attended grant writing workshops and learned different strategies that I was able to use,” said Wenner, whose pilot project was first funded by Delaware INBRE and later by the COBRE for Cardiovascular Health. “They really help you understand the process a little better and help you feel more confident.”

Delaware INBRE is a prime example of the power of a strong network, said Dr. Omar Khan, president and CEO of the Delaware Health Sciences Alliance, a consortium founded in 2009 by UD, Christiana Care Health System, Nemours and Thomas Jefferson University and dedicated to improving the health of Delawareans through biomedical research, access to healthcare and the education of healthcare professionals.

An undergraduate research experience through Delaware INBRE studying a chronic disease could lead one student to pursue a career in healthcare with the goal of finding a cure. A chance networking event could provide an opening for a promising grad to seek out a job posted by a Delaware INBRE partner institution. Whatever the opportunity, the strength of the INBRE network creates a biomedical ripple that can be felt across the state.

“The more we leverage our connections in a smart way, we can advance health and health outcomes in Delaware,” Khan said. “Having that network of networks is just incredibly powerful.”

The additional funding provided by the NIH for the Delaware INBRE program will allow the program to address some of the geographical and logistical challenges that have arisen as the program has expanded. It also allows the program to continue funding research aimed at addressing some of Delaware’s biggest health challenges, including cancer and cardiovascular disease, Stanhope said.