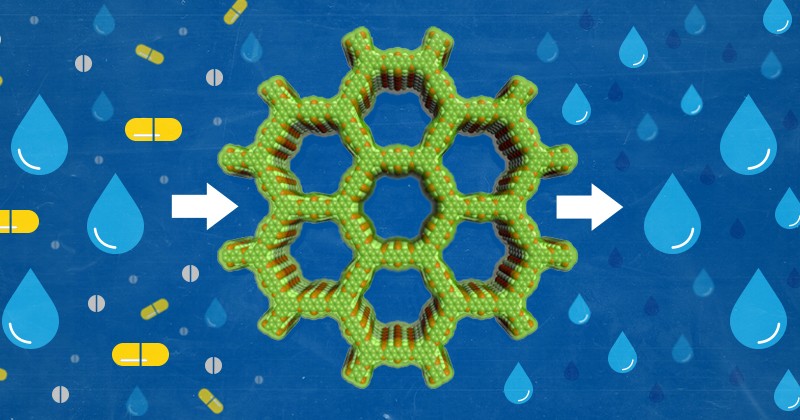 An international team of researchers recently synthesized polyarylether-based covalent organic frameworks, the most stable crystalline porous material on record. The team, which includes the University of Delaware’s Yushan Yan and Jilin University’s Qianrong (Frank) Fang, a former postdoctoral researcher with Yan at UD, described their results in the international scientific journal Nature Chemistry.

Some materials act like sieves and let molecules pass through their pores. These materials, known as molecular sieves, are useful in many industrial processes, especially in the chemical and energy sectors. They could be used to remove contaminants from water. They have also received attention for potential applications in aerospace, rail transportation, automobile manufacturing and more, but so far, their applications have been limited by their instability under extreme conditions.

Yan, the Distinguished Engineering Professor in the Department of Chemical and Biomolecular Engineering, has investigated crystalline porous materials such as zeolite since his doctoral research in the earlier 1990s. He won the Donald Breck Award, the highest award from the International Zeolite Association in 2010 for his zeolite thin film work. When Fang joined his group in 2009, the pair began to explore an emerging class of crystalline porous materials called covalent organic frameworks, which are linked by covalent bonds, show great promise, but at times are limited by available chemistries and their instability in harsh conditions, such as strong acids and bases. Yan and Fang were the first to make covalent organic frameworks using stable carbon-nitrogen bond (imide) and they have since, first at UD and then at Jilin University after Fang left UD to take a prestigious faculty position back in China, been working to develop covalent organic frameworks based on carbon-oxygen bonds. They anticipated these materials would be stable — if only they could make them.

To do so, they made frameworks out of polyarylether, a highly stable engineered plastic. By carefully designing the skeletons based on new stable bonds, they made a material that was more stable than any other of its kind.

“Once you have the carbon-oxygen bond, this porous material is stable in strong acid, strong bases, and strong oxidants,” said Yan. The frameworks are also stable up to 400 degrees Celsius. “Among porous crystalline materials, organic or inorganic, this is the most stable one.”

For the next step, the research team made polyarylether-based covalent organic frameworks that could sift antibiotic residue out of water in a pH ranging from 1 to 13.

In the paper, the research group concluded: “These stable COFs [covalent-organic frameworks] are a perfect platform for the preparation of functional materials that can be used under extreme chemical environments.”