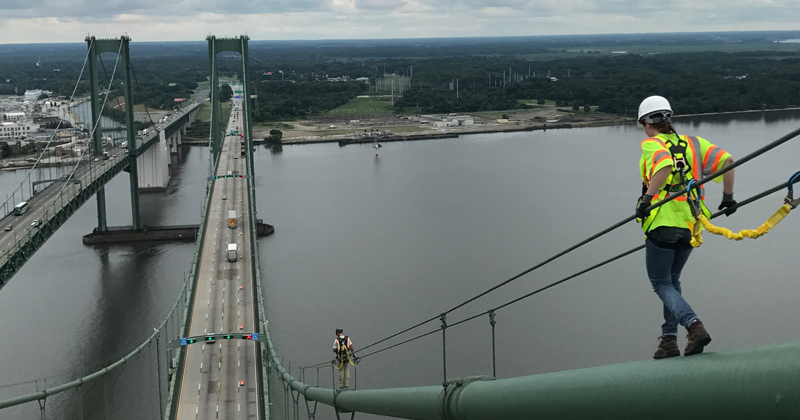 Roughly 500 feet in the air, with the water of the Delaware River rushing below and the cars on Interstate 295 whizzing by, Natalie Teichman followed her future boss up the cables that hold up the Delaware Memorial Bridge.

“It was terrifying at first,” Teichman, a senior on Delaware’s rowing team, said.

After the initial wave of terror subsided, Teichman settled in and continued to walk the length of the bridge, looking for anything that could compromise its structural integrity. Almost as soon as her feet were on the ground again, she was sending her resume to WSP USA (a multinational engineering and design firm) to be a bridge inspector.

Bridge inspection hadn’t even entered Teichman’s mind by the time she interned with the Delaware River and Bay Authority the summer following her junior year. Teichman was convinced she wanted to pursue coastal engineering, and was attracted to the DRBA, which operates several airports and ferries in the area, including the Cape May-Lewes Ferry.

The DRBA also owns the Delaware Memorial Bridge, and sends its interns to shadow the annual inspection to give them a fun, unique experience. Teichman first realized this could be for her during the first round of inspections, where a bucket truck parked on the bridge lowers the inspectors to examine the underside of the heavily used roadway. By the time she was climbing down from the cables of the bridge a month later, she had befriended the inspectors and was setting up a job interview.

“I liked it because it was not sitting at a desk and I’m not bored,” Teichman said. “I can go outside, it’s physically demanding. That’s when I thought, this is definitely something I could do. I feel like I’d actually be using my degree and the information that I learned in college.”

Teichman has been visiting Massachusetts to see family since she was little, and the state always felt like home to her. That WSP USA’s office was in Worcester, Massachusetts sealed the deal. She knew it was the opportunity for her.

Inspecting bridges is crucially important to maintaining the safety of the nation’s infrastructure. A mere fraction of an inch defect caused the Silver Bridge to collapse over the Ohio River in 1967, killing 46 people. Inspectors like Teichman look for warping, buckling, large sections of rust and erosion that could indicate the bridge isn’t supporting its load properly.

Regular inspections ensure bridges get the repairs they need to keep motorists safe.

Of course, Teichman and her teammates constantly pass under bridges when they train and compete on the Delaware and Christina rivers. The Wilmington, Delaware native picked up the sport in eighth grade after seeing the cool group of friends her brother made through the sport. Nine years later, Teichman says being a rower is her identity.

“It’s taught me everything,” Teichman said about rowing. “It’s taught me discipline, teamwork, and time management. Pushing myself when I feel like I’m dying.”

Just as a successful boat relies on a team of people working together, bridge inspection is always a team effort.

“One of the things I liked about it was that it was a team environment. They travel as a team, they work as a team, I don’t have to do anything alone,” Teichman said. “You’re always partnered with somebody, you’re never out there on your own.”

Teichman unfortunately suffered a back injury that ended her season, but the Blue Hens will race on the Cooper River in Cherry Hill, N.J. for the Colonial Athletic Association Championship on Sunday, May 19. And although she may no longer be in the boat, Teichman will still be on the river, ensuring the public’s safety.