Home » In Her Nature 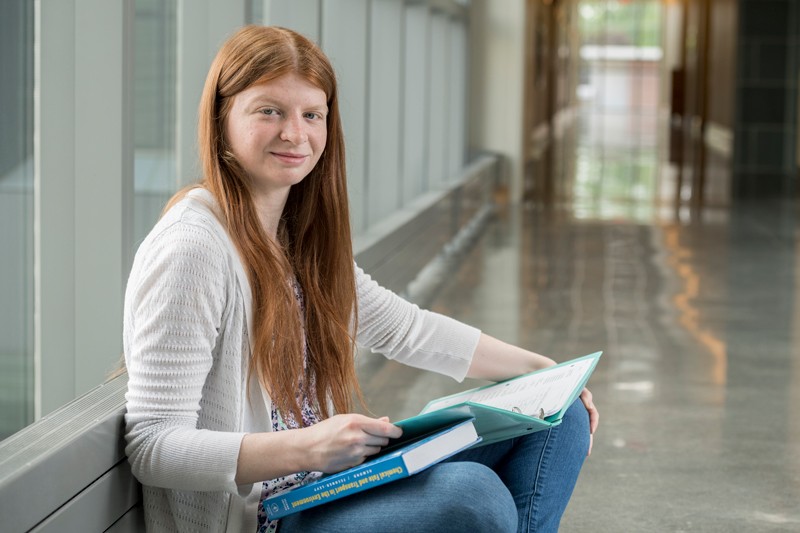 A typical weekend for Patricia Hurley doesn’t involve binge-watching the latest TV shows. This doctoral student in civil and environmental engineering at the University of Delaware spends much of her spare time outside — running, visiting an amusement park, exploring nature, or doing environmental cleanup along coastlines or highways.

She also dedicates time to mentoring first-generation college students, sharing tips on how to apply for scholarships and graduate school.

Hurley, a well-rounded, passionate student, is the 2019 winner of the Laird Fellowship, an annual award that helps one first-year engineering graduate student at the University of Delaware pursue interests beyond his or her field of study. Laird Fellows are selected for balanced excellence, demonstrating intellectual capability and qualities such as character, maturity, sense of humor, creativity, ingenuity, and imagination, coupled with practical skills, perseverance, and the common sense necessary to execute ideas, according to the selection committee. Patricia Hurley dedicates some of her spare time to doing environmental cleanup.

Hurley, a New Jersey native, joined UD in 2018 after graduating from Rowan University with a bachelor’s degree in civil and environmental engineering. As an undergraduate student, she was president of the Rowan Environmental Action League, a group that hosts on-campus cleanups and off-campus environmental trips.  When Hurley arrived at UD, she immediately joined the Delaware Chapter of the American Water Resources Association, a group dedicated to raising awareness of local water issues and resources. She is also seeking other volunteer opportunities with local nature and environmental organizations. Nature keeps her grounded — it’s an escape from stress. Running is another one of Patricia Hurley’s hobbies.

When Hurley first enrolled at Rowan, she didn’t think much about being a first-generation college student. She was focused on using her skills in math and science, and her love for nature, to learn about environmental engineering.

“Then it started hitting me — I didn’t really know what office hours were,” she said. “I didn’t know what an RA was in my dorm — but I ended up becoming one.” She didn’t have financial resources to pay for college, so she sought out scholarships, and every semester, she wondered whether she would have enough funds to return to campus. Graduate school wasn’t on her radar until an undergraduate advisor noticed her aptitude and passion for environmental engineering and suggested she apply to doctoral programs. Hurley wanted more expertise in her field — so she went for it.

Now, at Hurley studies under professor Yu-Ping Chin, focusing on the fate of antibiotics used in the poultry industry. The research group is trying to figure out whether these pharmaceuticals end up in soil, groundwater, or other areas after chickens ingest them.

“Patricia is a student that has overcome many challenges in her life in an effort to fulfill her insatiable appetite to learn about the impact of the built world on the natural environment,” said Chin. “In this regard environmental engineering is a natural discipline for her to pursue as a career and pass on what she has and will learn to the next generation.”

In becoming a Laird Fellow, Hurley joins an accomplished group of well-rounded engineers. “I’m now part of a network of people who are all really successful, and I can’t wait to see what the future holds,” said Hurley. Determined that something positive should come from this seemingly senseless loss, his family and friends established a fund to support a major fellowship, based on merit, that will provide a source of strong motivation to students working toward graduate degrees in the College of Engineering. The generous support of more than 300 donors has made this award possible.

“It’s great to be part of something so meaningful,” said Hurley. “The whole idea of creating something so positive from something so negative is really important to me. It intertwines with my story. There’s been a lot of negatives, and I’ve bounced back and created a positive with them. The meaning of the fellowship just aligns with my life.”