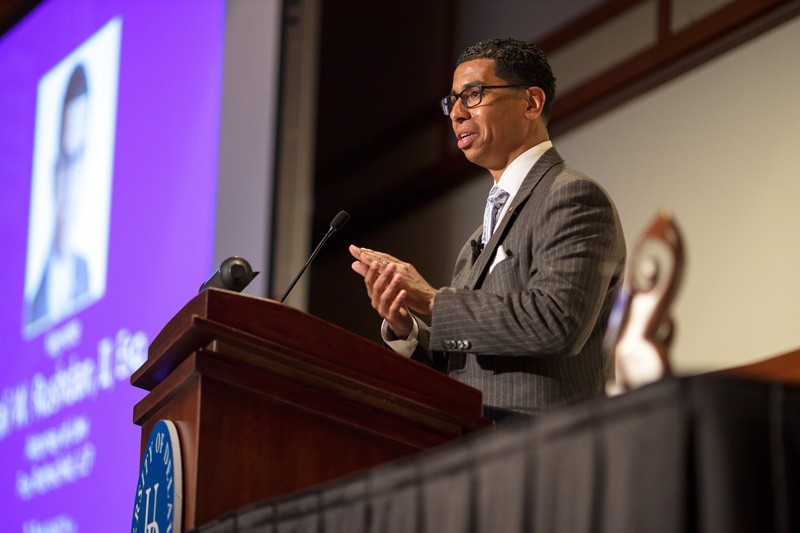 Dinner celebrates high-achieving students of color and their mentors

The University of Delaware was a transformative part of life for Wali Rushdan II. There was a lot of mixed emotions, he said.

“It was a time at which I was brimming with excitement about achieving my major goals in life,” Rushdan said. “At the same time, it was filled with anxiety and uncertainty about whether or not those ambitions would come to pass.”

Rushdan’s message to the 2019 Students of Distinction was to be proud of the honor and not to underestimate their individual potential. Rushdan was the keynote speaker at the May 1 event in Clayton Hall, organized by the Vice Provost for Diversity Carol Henderson. The event celebrates the achievements of students of color and their relationship with their mentors. Carol Henderson, vice provost for diversity and professor of Africana Studies, during the 2019 Student of Distinction dinner.

More than a decade ago, Rushdan was in their place when he was recognized for the same honor. He is now an associate at the law firm Fox Rothschild. He challenged the students to think carefully about what this honor means, including the obstacles, power and obligations that come with the distinction.

“What makes you a student of distinction, a key characteristic is that it’s not qualified. It’s a full stop,” Rushdan said. “These are things that you are committed to irrespective of the challenges that are in your way. These are your foundational principles. It’s a no-excuses mentality that you have.”

While the potential and drive are within the individual, Rushdan said he would not be where he is today without the many mentors that believed in him. He specifically recognized a few of those whole helped him at UD including Henderson, Center for Black Culture Director Kasandra Moye and former Director of Financial Aid Johnie Burton. He also recognized Gregory Williams, a partner in his law firm, who impacted Rushdan’s career. Wali Rushdan II (second from left) speaks with students during the 2019 Students of Distinction dinner.

“At every stage in my life, I’ve been the beneficiary of mentors,” Rushdan said. “Some of which happened organically. Many of which did not look like me. Many of which had different cultural experiences than I did. So I want to make sure we’re clear that mentors can take many different forms in your life and sometimes you have to be proactive about seeking them out.”

He closed by asking the audience to participate in a call and response of an affirmation he repeats regularly:

UD Provost Robin Morgan congratulated the full room of award winners on this special honor. Faculty and staff members can nominate any undergraduate or graduate students of color they believe are deserving of this award. Nominees are then celebrated at the annual dinner with their faculty and staff nominators.

“You’re here tonight, because someone noticed you,” Morgan said. “You caught their eye and you caught their attention. A faculty member or a staff member has looked at you and seen potential.” Similar to Rushdan, Morgan said mentorship completely changed the direction of her life. Her mentor introduced her to new avenues, like the idea of going to graduate school. She warned them not to take the power of mentorship for granted.

“You are students of distinction and we are very, very proud of every one of you,” Morgan said. “We are also proud of the faculty and the staff members who identified you and taken their evening to come and spend time with us, too.”

Henderson congratulated the 2019 winners and emphasized the impact of mentorship on the larger UD community.

“You earned the right to be here,” Henderson said. “In this fashion, this distinction is by extension a community effort that owes much of its synergies to the African principle of Ubuntu: I am because we are.”

She thanked all of those who helped put the event together. She also recognized several high school student groups invited to the event in the hopes getting an introduction to UD and building relationships that may one day become mentorships. This included students from the mentoring-focused groups Ladies of Legacy and Aspira of Delaware, as well as Dha’zhea Freeman, who impressed judges of a YMCA of Delaware essay contest with her words about Dr. Martin Luther King Jr. Freeman is scheduled to be a first-year student at UD in the fall.

Henderson noted there are many ways to think about mentorship, but highlighted the interpretation by Greek writer Nikos Kazantzakis. He wrote, “True teachers use themselves as bridges over which they invite their students to cross; then, having facilitated their crossing, joyfully collapse, encouraging them to create bridges of their own.” Some of the 2019 Students of Distinction gathered with their faculty-staff nominators at the annual dinner at Clayton Hall.

College of Agriculture and Natural Resources

College of Arts and Sciences

College of Earth, Ocean and Environment

College of Education and Human Development