The University of Delaware offered up a room full of research during its fifth “UD Day in D.C.” and the Capitol Hill event drew high praise from those who attended.

“This is a fabulous display of the cutting-edge research that you’re doing, the education, the training — the things that you’re delivering not just to Delaware but to our country and the world — solutions across so many different areas,” said Delaware U.S. Sen. Chris Coons, who serves on the powerful Senate Appropriations Committee and five of its subcommittees.

Several dozen UD researchers participated, all of whom get support from federal agencies. They filled a large reception room in the Hart Senate Office Building and spent two hours explaining what they do and why they do it. 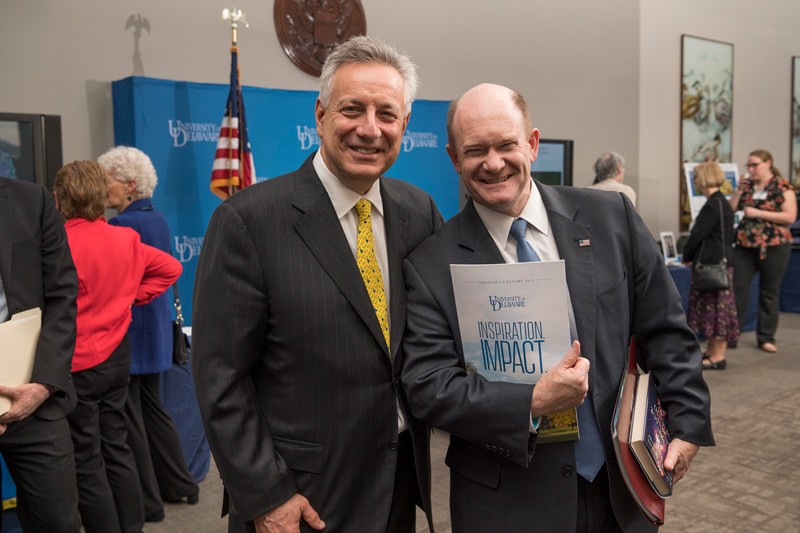 U.S. Sen. Chris Coons (right) has a degree in chemistry and is a powerful advocate for University of Delaware research. Here he shows off his new copy of UD President Dennis Assanis’ annual report.

“It is demonstrating to everybody why research matters,” said UD President Dennis Assanis. “It definitely matters at UD. It is our lifeblood. And it matters to our entire society and our economy, so we’re here to demonstrate the great work we’re doing.”

Assanis also underlined the importance of federal funding and legislative advocacy, both of which help to fuel UD’s research.

Federal grant officers, congressional staffers and D.C.-area alumni took advantage of the opportunity to talk with the scientists and investigators. The event also gave researchers a chance to hear from Delaware’s leaders on Capitol Hill.

“We’re very lucky to have the University of Delaware as a big part of our lives,” he said. “I’m very grateful to stand with you.” 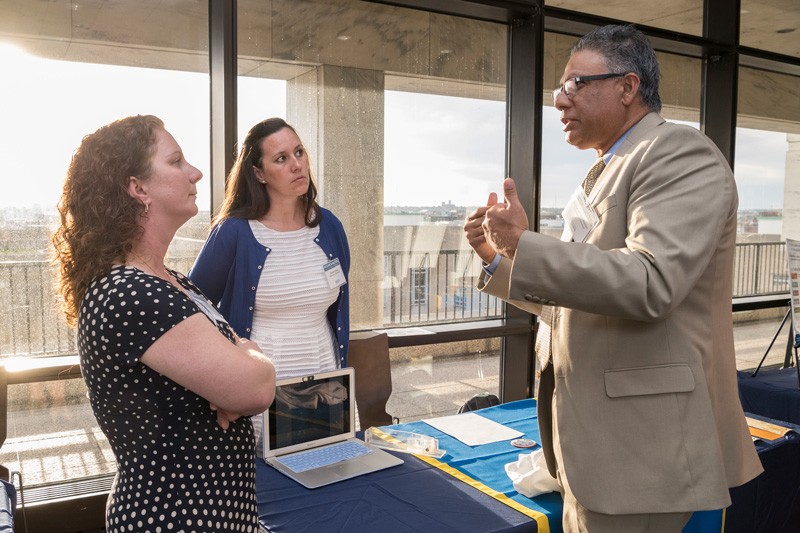 Federal friends in the house

Representatives of several federal agencies that support UD research were on hand to meet with those whose work they oversee and also to see what else UD is up to.

“This is a very nice display — and I really like seeing my awardee,” said Ann Lichens-Park, who works with the U.S. Department of Agriculture’s National Institute of Food and Agriculture, which supports the research of UD’s Nicole Donofrio, associate professor of plant pathology, through a joint program with the National Science Foundation. NSF Program Director Michael Mishkind also visited with Donofrio.

“It was just a really pleasant chance to talk about science and life in general,” Donofrio said. “We so rarely get to do that and these are great people — smart, fun and interesting.”

Ming Lei of the National Institutes of Health was present and spent a few minutes chatting with Coons about upcoming budget requests. The NIH is the single largest sponsor of UD research, providing $38 million in support in fiscal year 2018 alone.

“The University of Delaware’s science covers multiple fronts, from neuroscience to cardiovascular,” Lei said. “And they are in the forefront of bioinformatics and cybersecurity. It’s very, very impressive.”

As director of the National Institute of General Medical Sciences’ Division for Research Capacity Building, Lei oversees the Institutional Development Award (IDeA) program, designed to build capacity in states that have historically had low levels of NIH funding, including Delaware. 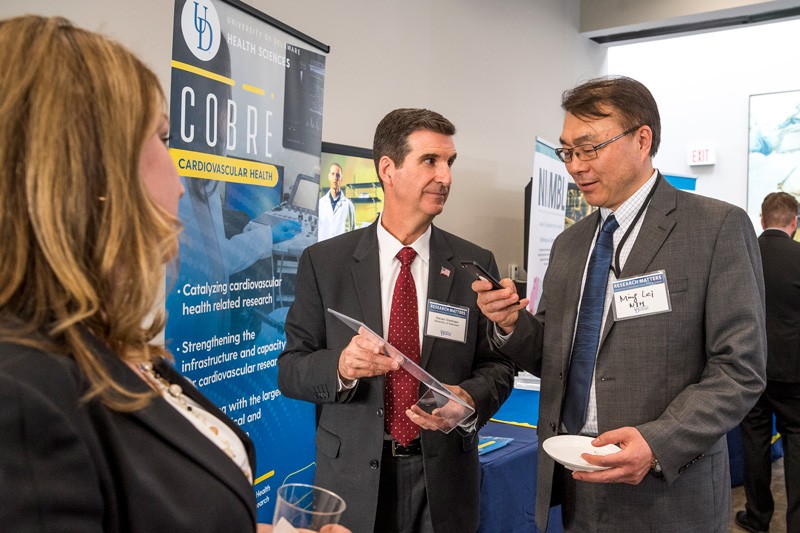 When NIH Director Dr. Francis Collins made his first visit to UD in March, Assanis urged him to double funding for the IDeA Program, which now represents 1 percent of the NIH’s $39 billion research budget.

“Dr. Collins told us he had been skeptical of the IDeA Program at first but has been persuaded that the funding it provides is well worth it,” Coons said. “So we’ll see in this year’s appropriations process if we can not just sustain it, but double it.”

Coons also said he will pursue more funding for the National Institute for Innovation in Manufacturing Biopharmaceuticals (NIIMBL), which has dozens of national partners and is directed by UD’s Kelvin Lee.

“I think there are 25 appropriations requests from the University of Delaware that my office and I will be working on,” Coons said.

He offered reassurance to those concerned by budget cuts proposed by the Trump Administration.

“For those of you researchers who have some anxiety about the president’s budget – don’t,” Coons said. “The president is proposing dramatic cuts to the NSF and the NIH, many of the programs we value on a bipartisan basis. I can tell you those cuts are being rejected. We will sustain our current levels of funding and in the case of NIH significantly increase it. Last year, the president proposed a $2 billion cut, but Congress worked its will and increased its funding by $2 billion. That is a bipartisan investment in what you’re doing, in cutting-edge research.”

Alumni in the mix

Many D.C.-area alumni were drawn by the research, the chance to reconnect with other Blue Hens or both.

Ed Kimmel, a 1958 graduate in psychology, enjoyed the 2017 UD Day in DC so much he made a return trip to see what was new. He said he especially enjoyed talking with Mark Moline, director of the School of Marine Science and Policy, who is part of the “Project Recover” collaboration that combines oceanography, archaeology, engineering, technology, history and unmanned submersibles to locate World War II aircraft and ships, the final resting places of Americans missing in action. 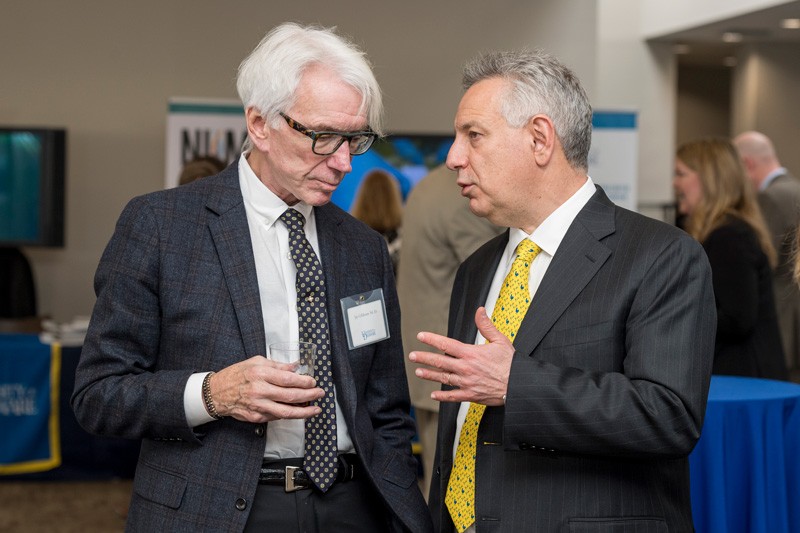 University of Delaware alum Jay Gibbons (Class of 1966), who was part of UD’s 1963 national championship football team, was among dozens of alumni who joined UD President Dennis Assanis for a celebration of the University’s research.

The highlight for Karen Keane, who graduated with a degree in accounting in 1978, was using virtual reality goggles to learn about NASA’s Magnetospheric Multiscale Mission (MMS) from UD astrophysicist Michael Shay.

“I totally loved that,” said Keane. “But I also loved talking to the biopharmaceuticals group [NIIMBL] and the diversity group [UD ADVANCE] and the underwater recovery project. There are a lot of really interesting, different projects.”

About 10 people who had been interns in the Spring Semester in Washington D.C. Program founded by Prof. Ed Freel turned up and a joyful reunion unfolded with him.

It was the first “UD Day in DC” for Freel, now retired and a senior fellow with UD’s Institute for Public Administration. He said about 100 students probably have gone through the D.C. internship program, which includes living in Washington and working on Capitol Hill, with federal agencies or nonprofits. Those connections and experiences are more evidence of UD’s reach and impact, he said.

“Ed Freel was one of my professors,” said O’neil Pryce, who graduated in 2013 with a degree in political science and public policy. “And I worked on the campaigns of Tom Carper and Chris Coons as a volunteer, so when I heard they were speaking, I had to come and represent. Plus, this was my first time to hear the new president speak.” 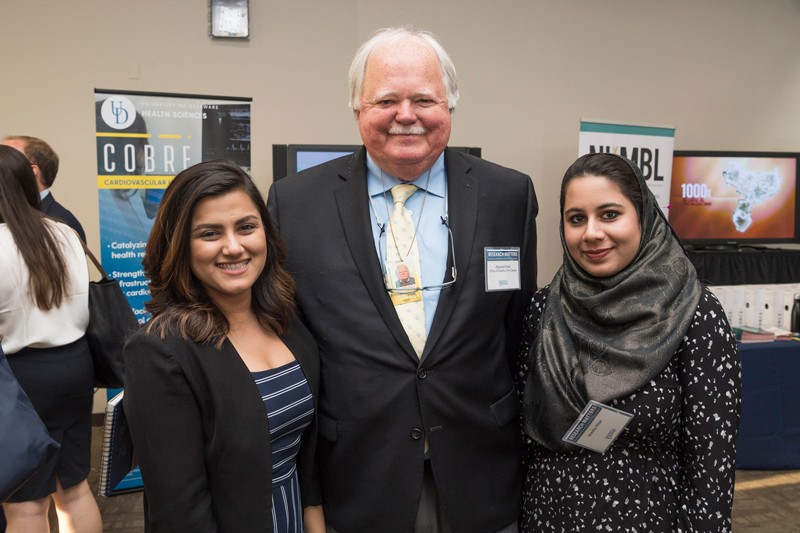 Elynsey Price, who earned her degree in communication in 2013, is on the board of UD’s Washington, D.C., Alumni chapter and wanted to be in the mix, too.

“This is a flagship event in the area,” she said. “It’s exciting to stay connected to the University and another way to see the great research going on there.”

As UD’s vice president for research, scholarship and innovation, Charles G. Riordan is focused on the University’s research enterprise all the time. But as he walked through the room, stopping at displays and chatting with UD’s faculty, staff, students and other guests, he was struck again by the breadth of studies underway and the connections the researchers shared.

“There is a strong sense of partnership and collaboration between and among the projects,” he said. “And it is very inspiring to see such a wide range of impactful UD research displayed in one location. I’d say it’s the most successful UD Day in D.C. yet.”

For their part, many researchers said they enjoyed talking with colleagues from disciplines other than their own and were surprised by some of the things they learned.

“I was surprised by the nanotechnology and the marine science and the plant sciences,” said Ali Poorani, associate professor of hospitality business management in UD’s Lerner School of Business and Economics. “There are amazing things going on here.”

Poorani is the principal investigator of the Patient Experience Academy (PXA), a training program that aims to help hospitals become more hospitable — including the Veterans Administration Medical Center in Wilmington. Already more than 100 people have been through new training modules, he said, and there are plans to add 15 more modules in the fall. 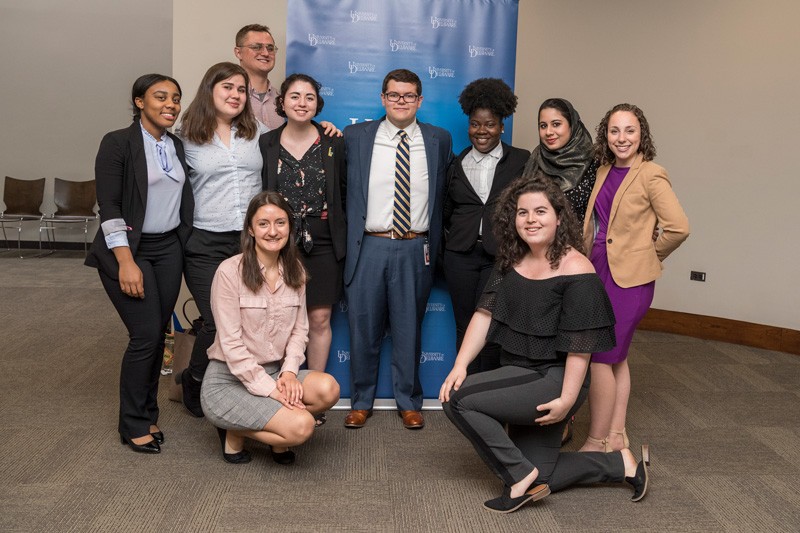 Among those in the mix at “UD Day in DC” were 10 students who have been interns in the University of Delaware’s Spring Semester in Washington D.C. Program, founded by Prof. Ed Freel, senior fellow in UD’s Institute for public Administration.

Amy Slocum, associate director of Delaware EPSCoR (Established Program to Stimulate Competitive Research) and assistant director of the Delaware Environmental Network (DENIN), said she is amazed at the growth she has seen in her 24 years at UD.

“There are so many different groups at the University now,” she said. “I can’t believe how much research has grown and diversified.”

Neuroscientists Jared Medina and Timothy Vickery shared a display table, which had an ample supply of foam stress balls shaped like brains, available for the taking. When they weren’t explaining brain science, they made their way around the room, too.

“I happen to think neuroscience is very cool, but other people here are doing cool stuff, too,” Medina said. “And for the people with the power to push for us, this is not just an abstract idea of science, but tangible products.”

Amanda Rosier, a doctoral student and a fellow in the Delaware Environmental Institute (DENIN), said the day was valuable to her for many reasons. She has a keen interest in science communication and makes deliberate effort to help the public understand her research, which focuses on how beneficial bacteria interact with plant roots.

“I was fortunate to have this platform to practice using different ways of describing my research depending on my audience,” Rosier said. “Through a simple brief conversation, I could learn what aspects my audience finds most important about improving plant and soil health with beneficial bacteria. Some folks were interested more in the global perspective — how my work can ease the effects of climate change — and others would like to have an environmentally friendly way to make their geraniums grow better. Either perspective is equally important and I enjoyed being able to explain the biology behind my work.”

She learned a lot talking with other scientists, she said.

“Because some of the subjects were so divergent from my field, I felt comfortable asking very basic questions without judgment,” Rosier said. “The folks presenting their work here were well-versed in the same public communication skills I spent the evening practicing. This was such a great way to not only learn about what they were doing, but what techniques work best to describe complex research…. I was so heartened to learn that whether the subject was brain science or gerontology we all had the common goal of making real improvements to the quality of our lives and environment.”

Donofrio said she would leave with a happy heart.

“It was an excellent and diverse collection of people,” she said. “I was really impressed by the comments of Sen. Carper and President Assanis. I liked it that Sen. Carper talked about innovation and I know Sen. Coons is a big advocate of that as well. It tells me what I already know about Delaware’s senators — that they pay attention to the University of Delaware and they care deeply about it. It just makes my heart happy.”