Home » Through The Eyes of a Chemist and Engineer

Through The Eyes of a Chemist and Engineer 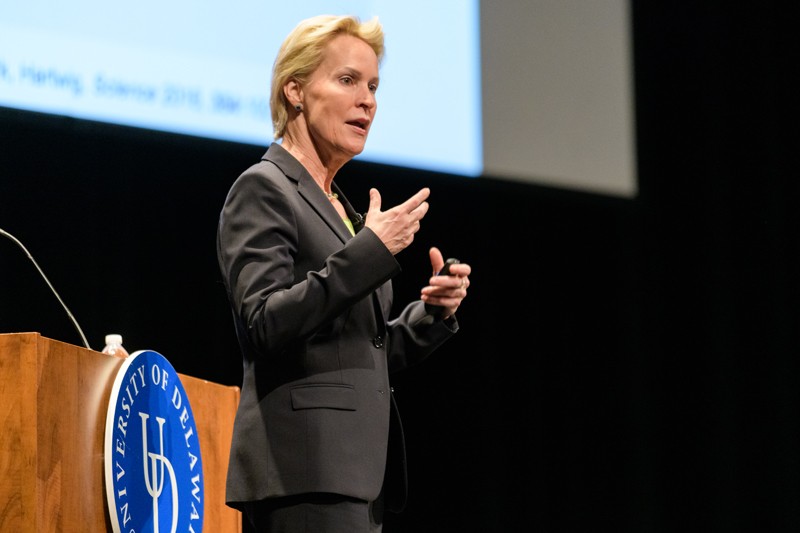 Breeding racehorses is an art. Breeders combine science, mathematics and experience to select a sire and mare they think have the best chance at delivering an offspring with the goods to perform against even the toughest competitor.

According to Frances Arnold, breeding enzymes — the biological muscle that helps catalyze complex reactions necessary for life — is a bit like that, too.

Arnold, who delivered the 2019 Edward G. Jefferson Lecture on Wednesday, April 10, at the University of Delaware, shared the 2018 Nobel Prize in chemistry for discovering ways to evolve proteins (long chains of amino acids essential for living organisms) to perform functions not found in nature.

It was work she started early in her career as an assistant professor at the California Institute of Technology that, today, has led to new families of proteins that speed up chemical reactions. These biocatalysts are environmentally friendly, enabling laboratories and companies to make products such as medicines, biofuels and laundry detergent in more sustainable ways.

We’ll come back to this in a minute.

Arnold wasn’t always focused on engineering enzymes. Her early career aspirations included becoming a diplomat or a corporate CEO. While an aerospace and mechanical engineering undergraduate at Princeton University, she took courses in economics, Russian and Italian before turning her attention to science, technology, engineering and math (STEM) fields where, for a while, she focused on solar energy.

The early 1980s, though, were an uncertain time for solar energy research funding. And the DNA revolution was just beginning. “Much to our benefit, that downturn in funding conspired with the dawn of biotechnology to draw Professor Arnold into her life pursuit toward engineering life’s building blocks and proteins to perform reactions that are not found in nature,” said Charles G. Riordan, UD’s vice president for research, scholarship and innovation.

As a graduate student at the University of California, Berkeley, Arnold became fascinated with biochemistry and nature’s ability to use renewable resources like carbon dioxide from the environment and available starting materials to “create all of the chemistry of living systems, in a recyclable, renewable, sustainable way.”

“I wanted to be an engineer of the chemists. The best chemists on the planet were these amazing molecules, the enzymes,” said Arnold, now the Linus Pauling Professor of Chemical Engineering, Bioengineering and Biochemistry and director of the Donna and Benjamin M. Rosen Bioengineering Center at Caltech.

Nature makes new enzymes all the time using a simple algorithm of mutation and natural selection — called evolution — that has given rise to the entire biological world, from molecules to whole ecosystems. Humans have been modifying the biological world at the DNA-level for thousands of years. Farmers have used it to develop new crops. Animal breeders have used it to encourage specific traits, say, in racehorses or dogs.

And while scientists can edit, read and write DNA, no one knows how to compose DNA or how nature invents new chemical functions.

When Arnold was a newly-minted assistant professor at Caltech, emerging biotechnology companies were creating a whole new industry for engineering, but no one knew how to make, purify or manufacture proteins on a large scale.

Arnold chose to overcome this hurdle by viewing it as an optimization problem. She credited Maynard Smith for laying out in a Nature paper the idea that for evolution to occur, a continuous network must occur in this space of all possibility such that one single mutation can lead to another functional protein.

Instead of using traditional methods of engineering proteins by changing one amino acid at a time, she leveraged a newly available technique called error-prone PCR to create thousands of random mutations at a time and let the system tell her the answer — and it worked.

There is a whole world of physically possible proteins, with useful applications, that biology never makes.

“The space of ‘all possible proteins’ is vast,” Arnold said. “It’s largely empty and many of the possible sequences don’t encode anything useful … but it contains the cure to cancer, the cure to death, maybe, … there is everything in this conceptual space. We need to have processes that allow us to discover these sequences.”

A protein with 300 amino acids, for example, contains more possible sequences than the number of particles in the universe, by hundreds of orders of magnitude. And, any given protein can be mutated thousands of different ways. Mutate it twice and you get millions of possibilities; three times and you get billions.

“Even natural selection has a hard time searching through these kinds of numbers,” said Arnold.

Arnold likened enzymes to graduate students: multi-faceted and complex with many capabilities. A student might be selected for her engineering prowess, but she also may be a talented pianist or tennis player.

Enzymes are just like that. When the environment changes, there are other parts of the molecule that can be co-opted to perform new functions. The key, she said, is to recognize seemingly random functions as potentially useful and use this process of evolution to catalyze a whole new reaction.

Today, Arnold is focused on sustainable chemistry, using chemistry and highly efficient biological systems to replace expensive or toxic materials currently used to make things in our daily lives. She’s keen to go beyond where nature has gone, too, and she’s eager for traveling companions.

Already she’s added two elements to the biological periodic table. The rest is up to others.

“We’ve just scratched the surface. Look at the biological world with the eyes of a chemist. You, too, can see the inherent racehorse capabilities of proteins and use this simple process to draw these capabilities out,” she said.

Graduate students are the future

Prior to her lecture, Arnold met with seven UD doctoral students. After brief introductions she asked, “Everyone wants to know what’s the future — that’s you. What do you think is the most exciting area of science?”

At first the room was quiet. This was a Nobel laureate asking, after all. But slowly an engaging conversation emerged. The answers were as varied as their voices: Immunology. Personalized medicine. Big data. Genome editing. Epigenetics.

“The advent of wearable technology that can be accessible to a lot of different people offers ways for preventative, rather than treatment-based, medicine,” said Danielle Valcourt, who is working on engineering nanoparticles to treat triple-negative breast cancer as part of Assistant Professor Emily Day’s biomedical engineering lab. “With wearables you can have better information tracking, and with big data you can start to see patterns in things like blood pressure that might drive early intervention.”

Wally Drake pointed to the potential use of CRISPR technology, specially designed strands of DNA some call “molecular scissors,” to enable scientists to edit cell lines in order to add immunity against genetic diseases. Drake works with Assistant Professor Catherine Grimes in the chemistry and biochemistry department.

“Talk about preventative medicine. That’s about the earliest preventative stage, to use CRISPR to edit out the gene,” added his lab colleague Elizabeth D’Ambrosio.

“It helps to change fields a lot,” she said.

The Edward G. Jefferson Lecture, endowed by a gift from the Unidel Foundation, is named in honor of the late chairman and chief executive officer of the DuPont Co., UD trustee emeritus and UD benefactor. It highlights distinguished work in the life sciences.