Home » Robots On The Farm

Robots On The Farm 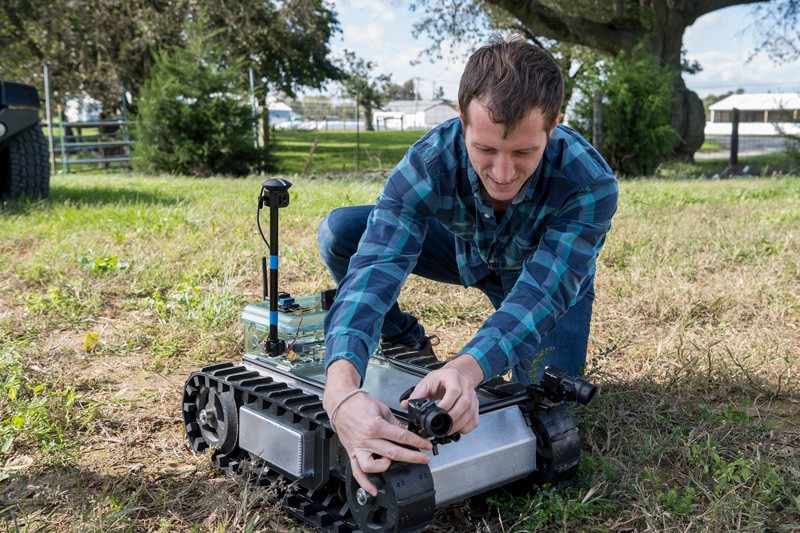 Engineers and plant scientists team up to optimize corn growth

Each new technological advancement in agriculture, from tractors to tillage techniques, has allowed farmers to plant and harvest more food in less time. Today’s era of agricultural innovation is precision agriculture — optimizing crop performance in farmers’ fields based on their individual characteristics. To combat the range of challenges in agriculture, such as improving crop yields and plant resiliency, increasing pest resistance, addressing nutrient insufficiency, and more, scientific insights into the crop are needed.

Robots are important tools for precision agriculture because they can quickly collect valuable data to help farmers fine-tune their methods of planting, irrigation, pest control, harvesting and more. Similarly, for scientific discovery that underlies crop improvement, robots make it possible to gather a wide range of information on very large numbers of plants – tens to hundreds of thousands – in order to break new ground in plant science.

With robotics engineers and scientists who study plant genetics and biology, the University of Delaware is an ideal breeding ground for robotic agricultural technology. Algorithms and circuits can be designed and built in laboratories onsite, and machinery can be tested in “outdoor laboratories” located on the University’s Newark campus. With the range of expertise at UD, the on-campus farm with dedicated research fields is a unique asset that facilitates cross pollination of different scientific domains, ranging from biology to engineering to data science, which can open new pathways that address challenges in agriculture.

Revealing the best way to breed

Engineers are an important part of the precision agriculture revolution, according to Adam Stager, a doctoral student in mechanical engineering.

“If you were to measure every single leaf on every single plant in a cornfield throughout the whole season, you’d need to send an army of people through the field to do it in a day,” he said. Instead, robots can collect rich data in short time.

“The application of robotics and automation to precision agriculture brings up an array of interesting research problems for us,” said Bert Tanner, a mechanical engineering professor, an expert in robotics and control systems and Stager’s adviser. By introducing automation into the cornfield, the team has a flexible experimental testbed for several different technologies of interest, from heterogeneous robot cooperation to mobile manipulation.

The goal was to add high-tech gadgets to a piece of equipment already present in many crop fields: a mobile, overhead irrigation system, which is dotted with sprinkler heads to water crops.

An undergraduate student in Tanner’s lab worked with Adkins to develop plans for a platform that piggybacks off the irrigation system, adding a rail and carriage system for the sensors to move along. Then, Adkins fabricated and installed the platform. In an outdoor laboratory dedicated to genetics and breeding research on UD’s Newark farm, Adkins mounted the existing irrigation system with a rail and carriage platform. Scott Hopkins, superintendent of UD’s Newark Farm, also aided in planning and installation of the platform.

Stager added gear to collect data about plants as they grow in the field. The technologies onboard include LiDAR, which is a surveying system that uses laser light to map the shape and structure of plants, and sensors to measure physiological aspects of the plants you can’t see with the naked eye, like how efficiently plants utilize sunlight to make energy. The system also features an RGB camera to capture visible images and a GPS with a very fine level of resolution to record where each data point comes from. This flexible platform provides a framework to tether new technologies and test new ideas.

All this data goes to a computer stored in a waterproof box onboard the system, and the information inside is treasure trove for Wisser. Prior to the recent emergence of “phenomics” where imaging and remote sensing technologies are used for high-throughput measurement of plants, the primary tool used to collect data were teams of individuals with rulers for some characteristics and subjective scoring techniques for others. The robotic system allows for an unprecedented amount of objective data collection, with the ability to capture repeated measurements on numerous characteristics over the entire life cycle of the plant. In turn, this unlocks the potential to unravel complex biology and develop prediction methods that spur innovations in plant breeding and crop production. “With this system, we can get all kinds of measurements that we could never otherwise get due to limitations of our ability to measure thousands of individual plants,” said Wisser.

Adam Stager, doctoral student in mechanical engineering, monitors crop data from atop the irrigation system in the outdoor lab at UD’s Newark farm during the summer.

Each plot in the field contains a population of corn with particular genetic material, allowing researchers to map and dissect the genetic basis of the variation in that particular population.

“This gives us information that helps breeders and biologists advance,” said Wisser. “It empowers us to get denser and broader information about the characteristics of the plants.” Normally researchers are restricted to low-tech methods such as measuring plant height at the end of the season. Now they can obtain the information repeatedly and study growth curves for individual genetic identities.

“This is a current theme in plant genetics and breeding and biology. People are using remote sensing technologies on different platforms: unmanned aerial vehicles, push carts, tractors. The platform enables you to collect all this of information, but computer scientists, data scientists and biologists then need to process and translate these data into meaningful discoveries. UD is in a great position to bring these experts together and capitalize on the robotic field systems in order to help with breeding the next generation of crop cultivars.”

Exposing the roles of brace roots

Erin Sparks, an assistant professor of plant molecular biology, researches corn brace roots, which grow above ground and are believed to stabilize plants by propping them up. Brace roots aren’t well understood, even by plant scientists, and Sparks wants to elucidate how they work. “We don’t know right now whether they are continually growing, or whether they emerge, pause their growth and are then triggered by something to continue growing,” she said.

In order to analyze brace roots, researchers typically have to dig up plants, but Sparks wanted a better way to collect data over time without destroying plants. With seed funding from the Delaware Biosciences CAT program, Sparks and Stager teamed up to develop a solution — a robot that can move through the field and collect pictures of the brace roots through the growing season.

Building on this platform, in collaboration with Joshua Peschel, assistant professor at Iowa State University, Stager and Sparks are also trying to determine if and how robots affect the fields they study. “Basically the question is: As we start to send more robots through the field, what happens to the plants?” said Sparks.

To test this, Peschel built a ground robot with an extended arm called the slapper, which simulates how a robot might run into a plant.

“Our hypothesis is that plants will actually reinforce themselves from being disturbed and that they will become stronger from sending robots through the field,” said Sparks. “But the alternate — that it’s detrimental to the plants and we’re definitely damaging them — is possible as well.”

Stager started the experiment with a commercial robot and then built a custom robot that addressed the engineering challenges associated with this project. How fast should it move? How should it navigate? What if it gets stuck in mud or caught on a root?

Robots under the canopy

Through a new Entrepreneurial Proof of Concept grant from the Delaware Bioscience Center for Advanced Technology, Tanner and Stager are also developing robotic technology that can survey the soil underneath plants.

“The operation of the sub-canopy tracked robot in particular gives us the opportunity to wrestle with one of the central, and sometimes overlooked, challenge in field robotics: uncertain and uneven terrain traversal for robotic vehicles,” said Tanner. “It is day and night to operate a robotic vehicle in ‘sterilized’ lab conditions compared to bringing it out in the real world where it may have to go through mud, rocks, water puddles, undergrowth/weeds, etc.”

This is knowledge that transcends the corn field and will inform the development of future robots for land, aerial and underwater use.

Undergraduate student Raymond Zayas is working with Tanner and Stager to develop a system to keep the robots on track as they move throughout the field. Cameras in the robots can use strategically placed tags, like QR codes, in the field to determine their position and navigate to their next location. “This project merges technology and nature,” he said.

This work brings together people with differing expertise and skill sets. “I think one of the best things about a project like this is that it brings a lot of people together,” said Stager. “I’ve met so many new people that I’ve worked with in the field, which is a lot better than being in a lab all day and not really seeing how whatever you’re doing in research is used. The practical side of engineering is really brought out when you have a team of people that really build something that’s going to go out and collect data.”