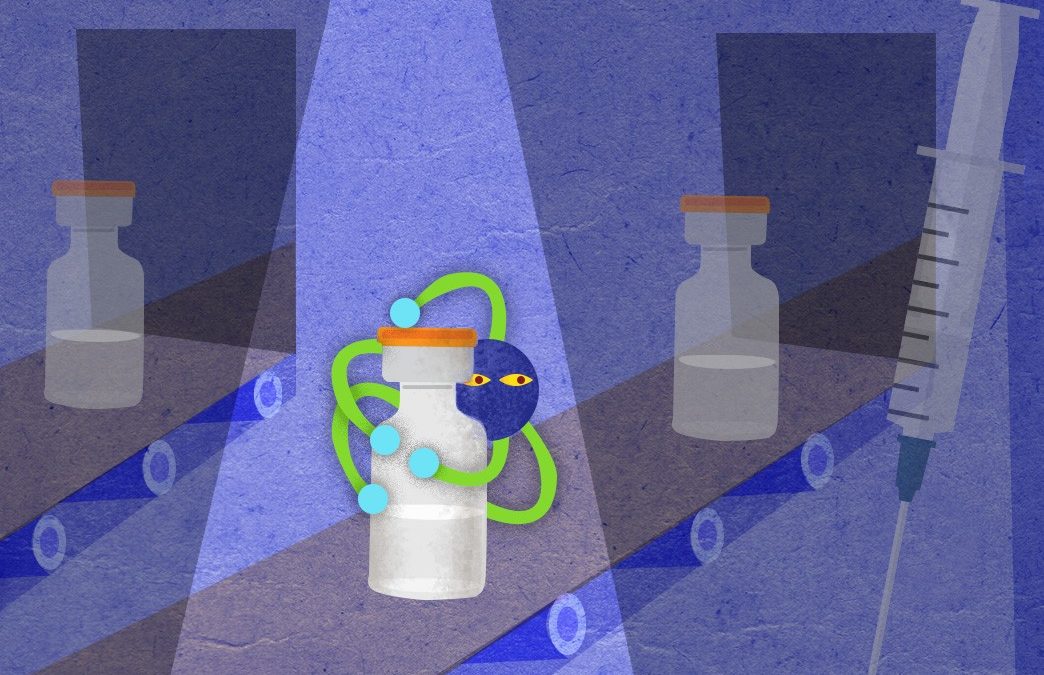 Why some biopharmaceuticals have a longer shelf life than others is a problem that has baffled scientists and manufacturers alike. Even the same medication, produced by different manufacturers, can vary in its storage life.

University of Delaware Professors Kelvin Lee and Abraham Lenhoff offer insight on one way this can happen in a special class of drugs called monoclonal antibodies, which comprise a large fraction of biopharmaceuticals.

Traditional small molecule medicines, such as ibuprofen or aspirin, are manufactured using well-defined, discrete chemical reactions between various chemical compounds. Biopharmaceuticals, on the other hand, are much larger and more complex molecules that are manufactured by growing cells that produce a desired protein (often, an antibody) that is purified to create the medicine.

Biopharmaceuticals can be used to treat cancers and autoimmune or inflammatory disorders, such as rheumatoid arthritis and Crohn’s disease. Adalimumab, for example, is a monoclonal antibody that blocks inflammation caused by rheumatoid arthritis by binding to the signaling protein that triggers the swelling.

The human body makes millions of antibodies in small quantities. Antibodies are what protect you from infection, and to some extent, from disease. For example, a chicken pox vaccine helps the body learn to make an antibody against the chickenpox virus. If you get chickenpox after being vaccinated, the body marshals its antibody troops and sends them off to find, and bind, to the virus; then signals the immune system to eliminate it from the body.

“Once you get the cell to start making the drug for you, then you grow lots of cells, purify the drug, formulate it and ship it out to doctor’s offices and hospitals. This is simplified, of course, but it’s generally how these classes of medicines are made,” said Lee, the Gore Professor of Chemical Engineering and director of the Manufacturing USA National Institute for Innovation in Manufacturing Biopharmaceuticals (NIIMBL) at UD.

The trouble is that cells don’t make just the desired antibody (i.e., the medicine), cells produce thousands of other proteins, too. When a medication is manufactured, these other proteins are removed through a process called purification. However, some proteins may stick to the antibody and piggyback their way through the manufacturing process. Manufacturers have developed methods to separate the piggybacking molecules in different ways, at different times during manufacturing, but problems can occur if the hitchhiking protein “looks” or behaves like the target medication.

Added to this, antibody-based drugs often are mixed with chemical additives to keep the medication safe and stable for a period of time, say six- or 12-months. One commonly used stabilizer is polysorbate. The polysorbate’s job is to keep the protein antibody in solution.

One challenge the biopharmaceutical industry has observed is that the level of polysorbate found in some drug products can decrease over time. This hitch can shorten a medication’s shelf life. For many years, there was no discernable reason for why the polysorbate degraded in some cases, but not in other cases.

In previous National Science Foundation-funded work, Lee and Lenhoff were collaborating to understand which contaminating proteins, or impurities, might be especially difficult to remove from a drug product. Lee specializes in analyzing complex mixtures and identifying all of the different proteins inside, a field called proteomics. Lenhoff, the Allan P. Colburn Professor of Chemical Engineering, is an expert in separating mixtures of proteins.

Through a series of experiments, the research teams identified a few dozen proteins that seemed likely to be impurities that would be difficult to remove. One protein that emerged as interesting for its potential to remain throughout the manufacturing process as an impurity was lipoprotein lipase.

Lipases are enzymes that chew up fats. Lipoprotein lipase is a common enzyme found in the human body that breaks down triglycerides, a type of fat found in the blood with a known association to heart disease and cholesterol problems.

“Lipoprotein lipase is one example of a protein that associates with antibodies and sometimes can’t be separated from antibodies using standard approaches. Thus, it may ultimately make its way through the manufacturing process to the other end,” said Lee.

“We knew through the work of others in the field as early as 2010 that the amount of polysorbate degradation seemed to be related to problems people see in the stability of drug,” explained Lee. “Now, our published research shows a clear link between the presence of lipoprotein lipase and polysorbate degradation, which has been a key problem that the industry has faced for several years.”

The researchers developed a method to reduce the amount of lipoprotein lipase that’s produced by the cells, in order to reduce the amount that might show up downstream as an impurity in relevant antibody-based drug formulations. They patented the idea with the help of UD’s Office of Economic Innovation and Partnerships (OEIP). Two former UD doctoral students, Kristen Valente and Nick Levy, both of whom now work in the biopharmaceutical industry, are named on the patent.

While the technique only applies to medications that may experience polysorbate degradation, the researchers consider it an incremental step that can help inform the manufacturing industry.

“It’s a quality control issue, and when you are talking about people’s lives at stake, you really pay a lot of attention to that,” said Lenhoff.

Lee agreed though he conceded that what happens next remains uncertain.

“When the technology gets adopted, or by who, I do not know,” he said. “But, now there are some clear solutions that people could follow for potentially improving manufacturing a stable supply of medicines that might experience polysorbate degradation.”