New Insights Into the Adolescent Brain

UD research could aid understanding of development and behavior in teens

The inner workings of the teenage brain are now slightly less mysterious, thanks to a research team led by University of Delaware engineers.

Using a non-invasive medical imaging technology called magnetic resonance elastography (MRE), the researchers found that adolescent brains are stiffer than adult brains in some areas and softer than adult brains in other areas. These findings could eventually be used to help clinicians assess development, risk-taking behavior, and other important cognitive issues as well as psychiatric disorders in teens. 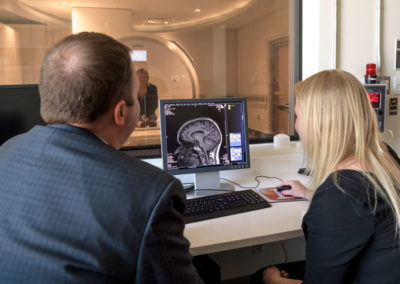 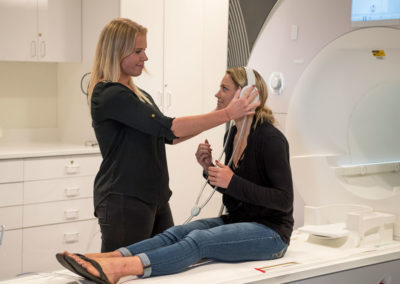 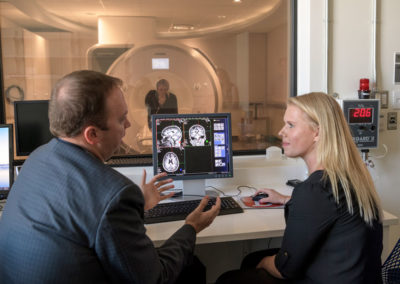 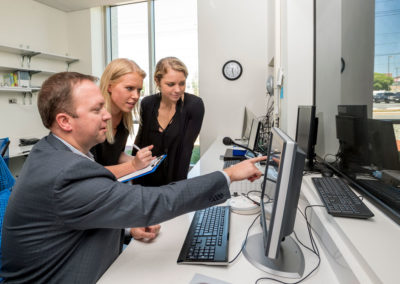 Published in the journal Developmental Cognitive Neuroscience, this study is the first to report the mechanical properties of adolescent brains in living study subjects.

You’ve probably heard someone say that children are like sponges—and that analogy really works. A young child’s brain is soft like a new sponge, while an adult’s brain is stiff like a sponge that has been squeezed, said study author Curtis Johnson, an assistant professor of biomedical engineering at the University of Delaware.

Over the last decade, researchers have increasingly utilized mechanical properties of brain tissue as a window into brain health, said Johnson. The softness or stretchiness of brain tissue can be affected by age or neurological diseases and has been linked to performance on tasks that measure thinking ability.

“Mechanical properties reveal a lot about very subtle aspects of the brain that are hard to see otherwise,” said Johnson.

Many researchers have studied the brains of small children, adults and elderly adults, but when it came to teens, there was a dearth of data. That’s a problem because adolescents can be affected by neurological disorders such as multiple sclerosis just as small children or adults can. To narrow this knowledge gap, Johnson and his colleagues set out to discover how the brains of adolescents measured up.

They used magnetic resonance elastography (MRE), which utilizes magnetic resonance imaging (MRI), a common type of medical imaging used to visualize joint injuries, heart problems and more. In MRE, the MRI is paired with vibration waves to map the mechanical properties of the brain. This scan required adolescents in the study to lay in the MRI machine for six minutes each for the brain scans.

Wondering how the researchers get kids to stay still during brain scans? They show them Frozen or The Incredibles.

Perhaps the stiffness of brain tissue spreads outward as we age, said Johnson, but more studies are needed to confirm exactly what’s going on.

“We’re interested in looking at children at younger ages to understand how this transition happens,” said Johnson. “Ultimately our goal is to have these measures for understanding how the brain develops and also how the brain matures.”

Data from these studies could someday be used to develop norms that clinicians could consult when examining children for developmental delays, behavioral abnormalities and psychiatric disorders. These insights into the brain could also be useful for anyone designing helmets or other protective gear designed to help kids reduce the impact of head injury.

“This provides us a huge way to treat and start looking at a very underserved population in terms of neuroimaging practices and also provide us a way to provide a new tool for neuropsychologists—something in their toolboxes to understand a bit better about how the brain is developing,” said Johnson.

Johnson has been studying mechanical properties of the brain since 2007 and joined UD’s faculty in 2016. One of his first undergraduate research students was Grace McIlvain, now a doctoral student in biomedical engineering at UD.

She is a co-author on the new paper, which also includes collaborators from the University of North Carolina, Eva Telzer, and University of Illinois.

McIlvain, who earned her bachelor’s degree in biomedical engineering at UD in 2017, spent the summer of 2016 working on this project as an undergraduate research summer scholar. She processed data, did lots of calculations, and wrote an undergraduate thesis that served as a first draft for this publication. McIlvain is now looking at how these same measures of brain stiffness and softness may be linked with risk-taking behaviors, timing of puberty, and more.

“This research involves a lot of problem solving, which I enjoy,” said McIlvain, who recently earned a master’s degree in business administration from UD’s Lerner College of Business and Economics in addition to her engineering studies. “I really like coding with Matlab, working with study participants, and mentoring undergraduate students.”

McIlvain is also working on a project to study the brains of children with cerebral palsy and is looking forward to another project studying children with autism. Her younger brother has Prader-Willi Syndrome, a genetic syndrome closely linked to autism.

“I really see my research taking a direction to study atypical adolescent development, particularly autism, which affects so many people and we don’t know exactly why,” she said.