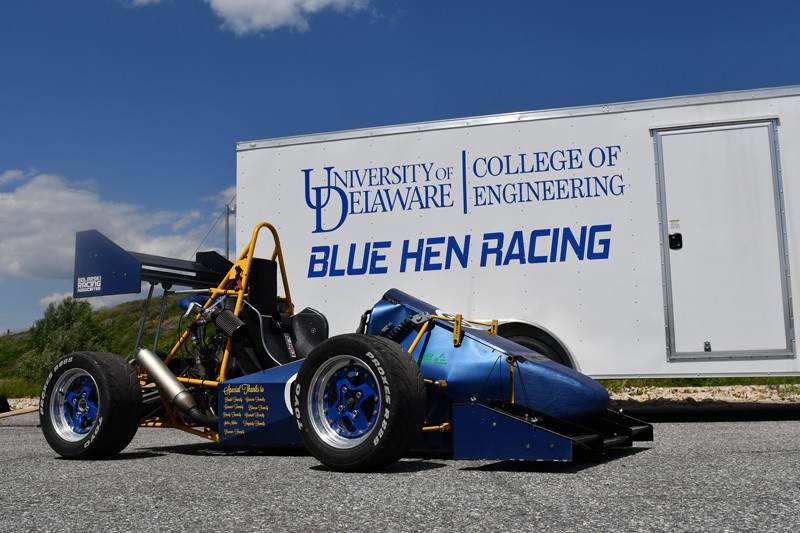 As a little kid, maybe 2 or 3 years old, Sean Nelan carried a socket wrench wherever he went. Cars were his thing.

So when he was a high school student touring the University of Delaware campus and saw the Formula Society of Automotive Engineers shop in Spencer Laboratory – he had the feeling UD was the place for him.

“I saw an opportunity to do a hands-on experience and UD promotes that,” he said. “It played out to be exactly how I expected. I got to do a lot of fun stuff.” A student member of the Blue Hen Racing team works on constructing the group’s car. Much of the work was done in Spencer Lab on UD’s campus.

Now a senior electrical engineering major and president of UD’s FSAE student chapter, Nelan has helped to steer the Blue Hens back into international competition with a UD-designed, built and tested Formula-style car.

As they did last year, Nelan and other members of the Blue Hen Racing team plan to travel to Lincoln, Nebraska, in June to compete against student teams from around the world.

But first, they’ll haul their 2017 race car to Washington D.C., for display at the U.S. Science & Engineering Festival, held Saturday and Sunday, April 7-8, at the Walter E. Washington Convention Center.

The team won’t flex that muscle in Washington. There, they will do what all garage pilots do – talk engines, parts, design details and test results with anyone who stops by. They’ll trade war stories and lessons learned. In constructing their car, UD students on the Blue Hen Racing team partnered with the College of Engineering’s Center for Composite Materials – which has its headquarters just across Academy Street from Spencer Lab – in using its carbon fiber material in the car’s body work. The composite helps with the car’s handling in corners.

Designing the car allows students to apply what they have learned in their engineering studies. Building it puts their designs to the test and gives them experience in making and connecting parts. Driving the car adds more complexity and that “rubber-meets-the-road” kind of reality check.

It takes lots of time, patience and resourcefulness. The team doesn’t have the multimillion-dollar budget of professional Formula 1 teams.

But it does have plenty of engineering power as part of the Department of Mechanical Engineering’s Senior Design capstone course. Steve Timmins is the faculty instructor of that class and the advisor for the FSAE team.

“By the end of one semester, the car – completely built from scratch – was about 80 percent complete,” Timmins said.

Ordinarily, Nelan said, they would cannibalize a previous model – using its parts in a new design.

But this year’s car is a “ground-up design,” Nelan said – completely re-configured with all new parts.

“This year, Spencer [Lab] got a new CNC [computer numerical controlled] mill that allowed us to make parts a lot faster,” he said. “We redesigned all the old parts. Some weren’t designed correctly.”

One part caused a problem at last year’s competition in Lincoln, where the wheel hub broke during the final event.

“It broke due to fatigue failure,” Nelan said. “So we made sure this car won’t break.”

This year’s team is made up of undergraduate students, but the rules say graduate students can participate, so Nelan – who plans to begin work on a doctoral degree at UD next fall – could be part of future projects. He’s not sure he will because of the demands a doctoral program makes, but he could if he wanted to.

Many team members are engineering students, of course – and many incorporate work on this car into their senior design project. But some students are from seemingly unrelated majors, including finance and hotel management.

“You don’t have to have any background or prior knowledge in cars,” Nelan said. “In fact, a lot of our best people have no background in cars. If you show up, you’re excited to work and have a good attitude, you’re universally accepted on the team.”

The UD program started about 20 years ago when the FSAE was quite young, Nelan said. Steve Timmins, instructor in the Department of Mechanical Engineering, is the team’s faculty advisor.

Nelan said the competitive element of the club had lapsed for a few years and when he joined the team in his freshman year, there was no car to race. So in his sophomore year, he and some other team members went to Lincoln to see what the competition was like. They returned eager to be part of it.

“All of us who went that year – my year or one year younger – had never seen a car completed before,” he said. “It was just a pipe dream before that. So going to competition became more of an achievable reality.”

Last year, 17 students put UD back in the action and the Blue Hens finished 43rd of 100-plus teams. With a new design and new parts, Nelan said he thinks the 2018 car could finish in the top 20.

In recent years, 3-D printing has been an increasingly significant part of the manufacturing process.

“It has really enabled us to take parts you would not otherwise be able to make on a standard milling machine,” Nelan said. “Our dashboard, battery box and hubcap dust shields are all 3-D printed.

The team also partnered with the Center for Composite Materials – which has its headquarters just across Academy Street from Spencer – using its carbon fiber material in the car’s body work.

“It adds downforce to the car and that sucks it to the ground,” Nelan said. “If you add downforce, that adds drag. So it’s a sacrifice – you have less top-end speed. But you get more cornering ability and that’s a big part of this…. We use it on all the body work, the nose cone and the aerodynamic elements. It’s very light and very rigid, but compared to metal – it’s about a third of the weight.”

At Lincoln, the car will be tested in five events – acceleration, braking, skidpad (a tight figure-8), autocross (one run down a track) and endurance (a two-driver, 30-lap event).

“We have a dedicated, really good team – with a lot of smart people willing to work into the late hours of the night,” he said. “We have really good design ideas and I think it has all come together so far.”

Many team members go on to work in the automotive industry, he said. He plans to work for the Department of Defense, doing research on radar and guided missile destroyers.

But first, there’s some racing to do.