Home » An Electronic Detective Goes Back to School

An Electronic Detective Goes Back to School 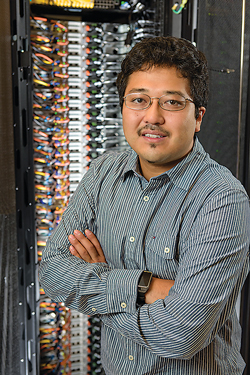 Teddy Katayama, EG15, has spent more than a decade gaining the experience and education to enter the increasingly emerging field of cybersecurity. Now, the 2015 computer engineering graduate is one of the first students to enroll in UD’s new cybersecurity master’s program.

Getting to that point, though, has been circuitous. He began his career auditing server logs, which provide an electronic footprint of user traffic on a website or other system. Starting on just two database servers, Katayama soon found himself handling 20 databases, while also writing programs.

He was then promoted to network security administrator and spent a year as an “electronic detective,” on the lookout for unusual patterns that might indicate illegal behaviors such as “spear phishing” (fraudulent emails from criminal hackers).

“Even with the experience I had, I saw that I would have to start at the bottom each time I joined a new organization unless I had an education,” Katayama says.

So he continued to work while taking classes part-time at UD and now brings to his graduate education a unique blend of real-world experience and research.

He loves the dynamic nature of the field of cybersecurity, which he says is different from other areas of science and engineering because everything—new operating systems, databases and software—“is happening right now.”

“Every new system brings with it a multitude of new problems, and there are no machines that can protect against all attacks,” he says. “In the end, we’re bound by people, not by machines.”