Home » Getting Up to Speed for a Mars Landing

Getting Up to Speed for a Mars Landing 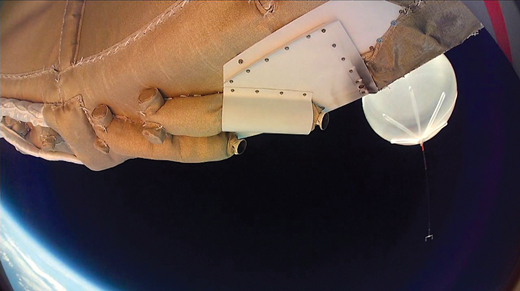 Editor’s note: Tom Frey, EG84, 90M, is a mechanical engineer at ATK Missile Defense and Controls in Elkton, Maryland. The business is part of ATK, an aerospace, defense and outdoor sports and recreation products company. Frey was lead engineer on a recent aerospace project designed to help NASA prepare for future missions to Mars. Here, he gives his account of the project.

Tom Frey on the launch pad

If you’ve seen reports or videos about a flying saucer in Hawaii, don’t panic. It was just NASA getting us one step closer to landing humans on another planet.

On June 28, NASA successfully conducted a flight test of a low-density supersonic decelerator (LDSD) system from the Pacific Missile Range Facility on the Hawaiian island of Kauai.

The test program’s purpose is to evaluate and demonstrate the effectiveness of two key elements—a supersonic parachute and an aerodrag device called a supersonic inflatable aerodynamic decelerator (SIAD)—in a new system for landing bigger payloads on another planet. The new system provides the capability of landing heavier payloads in preparation for NASA’s future Mars missions, which may eventually include humans.

The flight vehicle was launched, or lifted, using a huge balloon, roughly the size of the Houston Astrodome, to achieve an altitude of about 120,000 feet. This altitude was necessary to perform the test in a thin atmosphere resembling that of Mars. Engineers unload the test equipment from a plane.

The vehicle was “dropped” from the balloon, and a rocket motor was fired to accelerate the vehicle to a high velocity (Mach 4) to simulate Mars entry conditions. After motor burnout, the vehicle was allowed to coast until its velocity decreased to a predetermined value before inflating the SIAD. Once the SIAD slowed the vehicle to the proper velocity (approximately Mach 2.5), the parachute was deployed, allowing the vehicle to splash down in the Pacific Ocean, where it was recovered for posttest examination.

ATK Missile Defense and Controls designed and manufactured the STAR™ 48B axial propulsion solid rocket motor that accelerated the test vehicle. The motor design is a variation of the Delta II third stage, which had more than 100 successful flights.

“This project once again demonstrates the high performance, reliability and versatility of ATK’s STAR motor product line and also ATK’s continuing commitment to supporting NASA missions,” said program manager Jeff Bemis, who earned his master’s degree in business administration from UD in 2001. “It was the culmination of two years of good teamwork.”

From my point of view, as lead engineer for the project, this was probably the most unexciting “countdown” ever. Instead of a typical “3, 2, 1 liftoff!” rapid acceleration event, it was “3, 2, 1,” followed by a two-hour slow- balloon-ascent phase.

Once it got to the desired altitude, however, the excitement started. The ATK motor, which was custom-designed to meet this mission’s requirements, performed flawlessly to propel the system to the proper velocity. Basically, ATK got NASA’s LDSD system up to speed.

It made me think about Jack Vinson [H. Fletcher Brown Professor Emeritus of Mechanical Engineering], who supervised my master’s degree research at UD. I remembered Dr. Vinson telling me about one of his early pioneering projects studying composite materials—before they were even called composite materials—for Earth re-entry heat shields. In a way, this project is a continuation of that work. But this time, NASA is focused on Mars.

ATK MDC employs many UD alumni, including Mike Lara, vice president of strategy and business development, who earned his bachelor’s degree in mechanical engineering in 1982 and a master’s degree in business administration in 1984.

“ATK has long supported NASA with propulsion for space exploration initiatives, dating back to the Mercury, Gemini and Lunar Surveyor programs in the 1960s that paved the way for the Apollo missions, and more recently has supported science missions to the moon and Mars,” said Mike.

“One of the more interesting aspects of this project is that our motors are being recovered and returned to us. This allows us the rare opportunity to evaluate a motor that has been flown in a space environment. Typically, our spent motors remain in space or are lost during re-entry.”

The ATK Space Components division also supported the program by providing the composite core structure assembly that connected the motor to the vehicle. ILC Dover, in nearby Dover, Delaware, also played an important role in this project, providing the SIAD device that helped slow the vehicle to subsonic speeds.

Next, NASA’s Jet Propulsion Laboratory will take time to fully evaluate and understand the data obtained from this first flight test and make any adjustments necessary. Additional flights are planned, scheduled to begin in the summer of 2015. NASA is targeting the next mission to Mars for 2020.