Roberth and Ruth Loveless, Class of ’39 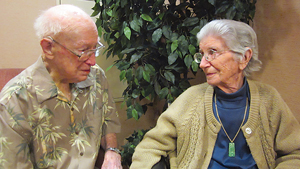 When Robert K. Loveless, EG39, recently sent an email to UD President Patrick Harker reminiscing about the years he and his wife, Ruth Kohlbecker Loveless, AS39, spent at the University, he raised an intriguing question:

“We got to wondering if we are your oldest surviving alumni, at [age] 96, Class of ’39,” he wrote. Some research by the Office of Alumni Relations came up with the answer: It appears that the Lovelesses, who live in Placerville, Calif., are not the oldest individual UD alumni but are the oldest “Double Del” couple.

In his note, Robert Loveless, who earned his degree in electrical engineering while his wife earned hers in chemistry, referred to her as “my sweetheart” and said that they married in 1940 and are “still living, happily” together.

His memories of their undergraduate years include electrical engineering Prof. George Koerber “lumbering about” and Robert L. Spencer, dean of engineering from 1928 to 1945, “playing his bassoon in his office after hours.” The Lovelesses also recalled the evenings they met in the library, a space shared by the then-separate men’s and women’s colleges, and lingered there while the librarian tried “to shoo us outside.” The couple also enjoyed Saturday night dances in Old College, Robert Loveless said.

“We have fond memories” of the University, he wrote, adding that the campus “has certainly changed over the years since we graduated!”

Editor’s note: Shortly after this issue of the UD Messenger went to press, we received the sad news that Ruth Loveless died on March 29, 2014.