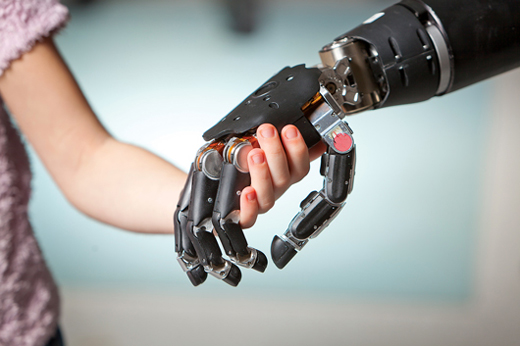 Electrical engineer Michael McLoughlin, EG83, 85M, began his latest research project five years ago in hopes of finding a better way to help soldiers who had lost an arm.

Today, with the support of the Defense Advanced Research Projects Agency (DARPA), McLoughlin, who is principal investigator for the Revolutionizing Prosthetics Program, and his team at the Johns Hopkins University Applied Physics Lab have developed a revolutionary prototype, which is controlled by the user’s brain. With 17 motors controlling 26 joints, over 100 embedded sensors and a tiny computer built into the palm of the hand, the Modular Prosthetic Limb (MPL) device enables users to actually “feel” objects by stimulating the truncated arm’s remaining sensory nerves. “The brain remembers where nerves were previously mapped even years after an amputation,” says McLoughlin. “By tapping into nerves that were originally connected to the arm, the user can move the arm and feel sensation in a very natural way.”

An estimated 2.5 million people in the United States have suffered amputation of an arm or leg due to injury or illness. About 100,000 of these are upper-extremity amputees. The technology required to provide unique prosthetics to this small population, however, can be fairly expensive. Until recently, many people with upper-extremity amputations chose to use a hook or not to use a prosthetic at all.

The September 2013 edition of the UD Messenger featured a story about Anne Mekalian, a 1968 graduate and third-grade teacher who has lost her arms and legs to sepsis. The story chronicled her remarkable recovery, rehabilitation and positive attitude, as well as her students’ successful efforts to raise money for their beloved teacher to get a specially equipped car she could drive herself. The device in use, zipping a backpack closed.

McLoughlin believes that merging prosthetics with robotic technologies that have a larger market can ultimately drive down costs and increase the technology’s commercial viability across multiple markets, from assistive aids for people with spinal cord injuries or for the elderly, to prosthetics, to human-like robots that can aid in emergency disaster response or defense.

“We think this technology has a lot of uses and believe that it will someday be as ubiquitous as your smart phone,” he says.

The research project began in 2006, through funding from DARPA. According to McLoughlin, who joined the project in 2009, the team leveraged “research that had gone on in the community for years,” by bringing together scientific and engineering experts from many technical disciplines and more than 30 different organizations including University of Pittsburgh, California Institute of Technology, Walter Reed National Military Medical Center and Rancho Los Amigos, one of the nation’s largest spinal cord injury centers.

“We realized that there was an opportunity to leverage the core technology developed in the DARPA program to assist a wide range of patients,” McLoughlin says. “We began to take classical robotics, which includes computer vision, machine learning and object recognition, and fuse that with rehabilitative devices such as prosthetics.” The team already has six custom-built MPL prototypes, and plans to build four more. While the current prototypes are designed for research (think the Maserati of robotic arms), they are working to scale the MPL for commercial use (Maserati to Chevy).

UD alum Anne Mekalian, EH68, who lost her arms and legs to sepsis in 2011, is among nearly a dozen patients who have tested various iterations of the MPL. She made history as the first amputee to pilot bilateral robotic arms simultaneously and has spent significant time using the Applied Physics Lab’s 3-D Virtual Integration Environment, which allows patients to practice outside the laboratory. The lab’s team is currently working to secure Mekalian conventional prosthetic limbs that can be adapted with control techniques developed by the Johns Hopkins team to ultimately enhance her quality of life, McLoughlin says.

Components in the MPL are also being used in military robots for defense applications. Advances made there flow back into the prosthetics technology, McLoughlin says. If the research team designs a better joint system for field use, those technology advancements are applied to the rehab design and vice versa. The same applies to motors and electronics.

The next hurdle, he says, is in transitioning the technology to everyday use.

“In communications they say that the last mile is the toughest—from the pole to the house is the challenge. Here, it’s the last inch. Many robotic platforms can get a manipulator to almost grasp an object; it’s actually grasping and manipulating the object that is difficult,” McLoughlin says. Conventional prosthetics also require intense concentration to do relatively simple tasks such a using a fork to eat.

To achieve the “final inch,” the team will focus on using computer vision and automation to make everyday tasks easier.

“Not all people may want invasive surgery to enable the technology to work. That’s why we focus on a spectrum of controls so that we can devise a high dexterity, noninvasive device,” McLoughlin says. He hopes to see the first of these devices released a few years from now.

And someday soon, the unique robotic arm might help safeguard bomb technicians or emergency rescue personnel in the battlefield.

“We started this program to develop a system that could replace a soldier’s arm,” McLoughlin says. “Wouldn’t it be great if the robot lost its arm instead, and we could prevent the injury from happening at all?”