Home » The Gift of Discovery

The Gift of Discovery 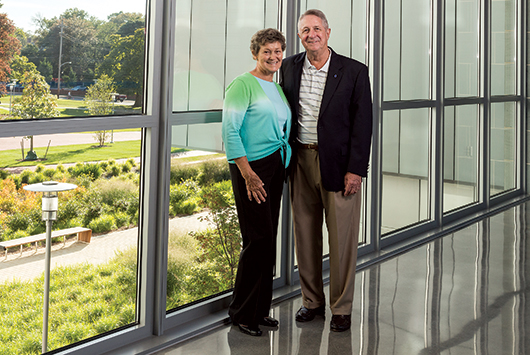 A gift of future discoveries

Standing on the steps of the building that bears his family’s name, happily watching students with books and smartphones scurry across campus on a sunny fall afternoon, Robert W. (Bob) Gore recalls his own days as a University of Delaware undergraduate.

And, yes, as a freshman in 1955 he did have to wear one of the colorful—if less than fashionable—blue and gold beanies to designate his status as a first-year student.

While at UD, Gore played trombone in the marching band and was in a fraternity, but mostly he studied. “When you are in chemical engineering, there’s not much else,” he says, laughing. “We had to design a mirror that would not condense in the shower,” Gore says. “I thought I had a good design, but in hindsight it might have been too complicated for practical application as a product, and Prof. Metzner probably took that into account.”

A good idea that turned out to have significant practical applications came during Gore’s sophomore year at UD, when he suggested to his father, Wilbert L. (Bill) Gore, an idea for an innovative multiconductor wiring strip. Bill Gore, who had taken an interest in the polymer polytetrafluorethylene (PTFE) and its potential uses in the manufacture of electronic wire and cable, was working on it after hours in the basement of his Newark home.

Realizing the potential of his son’s recommendation—which provided a key solution to an early manufacturing question and earned Bob Gore his first patent—Bill and his wife, Genevieve W. (Vieve) Gore, founded W.L. Gore & Associates in 1958.

Today the international company is a leader in front-line technologies, with annual sales of more than $3.2 billion and products ranging from medical devices to high-performance fabrics. From the outset, Bob Gore had a huge role in that success.

He graduated from UD in 1959 and went on to earn a master’s degree and a doctorate in chemical engineering at the University of Minnesota. He was named to the W.L. Gore & Associates board of directors in 1961, and two years later joined the family firm as an employee.

His research and development work led in 1969 to a watershed discovery—a new polymer, expanded PTFE, which entirely reshaped the company’s future. The substance provided myriad new product applications including Gore-Tex fabric, the world’s first breathable waterproof fabric and a product that through the years has become synonymous with the outdoors.

Bob Gore’s passion for technical innovation left an unmistakable impression on W.L. Gore & Associates, where he later served as president and, since 1986, as chairman of the board of directors.

Beyond its vast economic impact on northern Delaware and beyond, the Gore family has been a stalwart supporter of the community, donating time and money to a wide variety of causes and projects. Bob Gore has remained closely connected to his alma mater both as an emeritus member of the Board of Trustees, where he served from 1992-2010 and as vice chairman from 1999-2007, and as a generous benefactor.

“The University of Delaware has long been a leader in instilling important intellectual tools and learning such that students can enter the workforce and make important contributions to society,” he says. He has called UD “the springboard for my career,” and says he views it as a worthy steward of his financial contributions.

“I like the money to be well spent—to give to institutions and people that can invest the money well,” he says. “I have been involved with the University of Delaware closely and for many years, and I know the investment is going to a place that will use it well.”

He and his family contributed $18.5 million to finance the construction of Gore Hall in the mid-1990s, and in 2005 he donated $1 million in his mother’s memory to fund the Genevieve W. Gore Recital Hall in the newly built Roselle Center for the Arts.

Bob Gore says his family has had several different philosophies of giving. His mother, for example, had numerous interests she liked to support, including the arts.

His own philosophy focuses on the value he believes gifts will yield when utilized by an institution he trusts to spend it well.

“The money is hard-earned,” he says. “The people at W.L. Gore & Associates worked hard to create that wealth, and I don’t want to put it someplace not worthwhile.”

Most recently, he and his wife, Jane, made a commitment of $10 million to benefit UD’s new Interdisciplinary Science and Engineering Laboratory (ISE Lab). In recognition of that generosity, the research wing of the state-of-the-art facility has been named the Bob and Jane Gore Research Laboratories.

Science and engineering are certainly vital in this era of high technology that can “drive everything from what kind of disease-resistant tree we plant on The Green, to the buildings we study in, to health services and our increased life span,” Bob Gore says.

All that progress is technology driven, he says, but it also always occurs “in conjunction with other kinds of knowledge and wisdom.” The academic underpinnings of ISE Lab as interdisciplinary are important, Gore says, because wisdom comes in many forms, not just in the areas of science and engineering but also in the understanding that develops by studying the arts and humanities.

“The ISE Lab is a major step in providing an environment for individual creativity combined with interactive teamwork,” he says. “It is a pleasure for me to support such an important initiative.”

Wrapping up his recent campus tour, Gore stands in front of the sign designating the Bob and Jane Gore Research Laboratories and happily dons his well-worn blue cap that proclaims “UD Engineering.” It easily beats the beanie.

Article by Neil Thomas, AS76