Universities May Hold Key to Cybersecurity 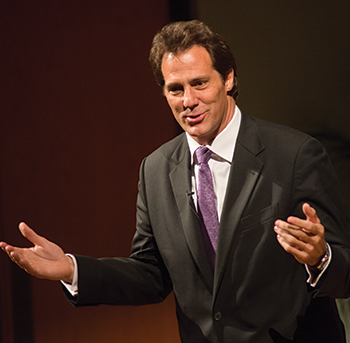 David DeWalt, EG86, chairman of the board and chief executive officer of the global network security company FireEye and a member of the National Security Telecommunications Advisory Committee, has dedicated himself to matters of cyber security.

“I see this as a huge problem moving forward,” DeWalt said during a recent talk at UD. “You have all of this innovation occurring—mobile devices, IT consumerization, social networking, cloud computing—but there is a downside to it, and that is security.

“There are tremendous vulnerabilities, and when you consider the anonymity of the Internet and the lack of governance, you get this perfect storm.”

DeWalt, who majored in computer science, is recognized as a leading expert in the fields of technology, cyber security and mergers and acquisitions. His lecture, titled “Numbers: Transformational Stories of Success and Failure from the East Coast to the Silicon Valley,” used numbers to illustrate the important life lessons he was able to cull from his greatest achievements and most trying losses.

The April talk was part of the President’s Leadership Series, which brings prominent innovators and leaders in business, technology, athletics, the arts and the humanities to campus to share their knowledge and life experience with the University community.

DeWalt told the audience he believes that UD and other institutions of higher education will be part of solving the cyber security issue.

He cited partnerships with such corporations as JPMorgan Chase and Bloom Energy, and collaborations in the new Interdisciplinary Science and Engineering Lab, as examples of how the University can meet other challenges as well.

“What an opportunity UD has here for partnerships to advance education in the world of cyber security,” he said.

DeWalt was recently named one of the 25 most influential executives in high technology by the readers of the industry publication CRN. In addition, he is a frequent guest on international business programs and appears regularly on Bloomberg TV, CNBC, CNN and Fox Business.

He has more than 20 years’ experience holding a series of leadership positions in some of the industry’s most innovative and successful companies including president and chief executive officer of McAfee.

As a student at UD, DeWalt was a star wrestler for the Blue Hens, advancing to the NCAA finals three times and named an All-American in his senior year. While he excelled in sports, he was also a committed student with a very specific goal—he wanted to become a CEO.

In his talk, he lauded his alma mater for setting him on the right track as he described how his life unfolded.

Armed with a degree in computer science, his goals and little else, DeWalt set out for Silicon Valley, Calif., after graduation. His first job was as a telemarketer for Oracle, making 500 cold calls per week.

His dreams came to fruition in early September 2001 when he was named CEO of Documentum, a global leader in enterprise content management. The company was acquired by EMC Corp. in 2003.

In 2007, DeWalt was named president and CEO of technology security giant McAfee.

“Delaware opened my eyes up to some tremendous things,” he said. “I have to give huge kudos to the computer science and engineering programs at UD for invoking passion into me and my fellow students. I also thought the flexibility of the University was amazing for me as a student-athlete. It let me nurture myself through both athletics and academics. It was that combination that really helped me.”