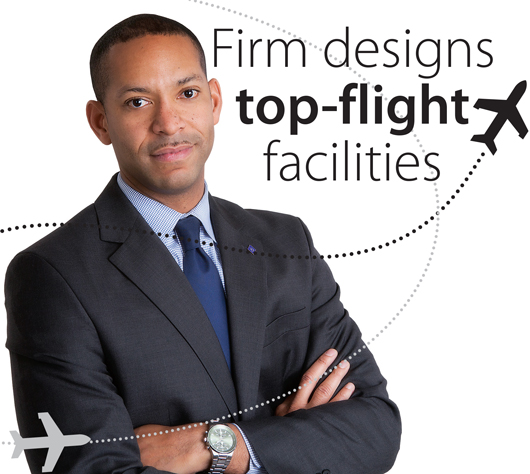 Karen B. Roberts, AS90, recently caught up with Johnson for the UD Messenger to discuss what it takes to keep air travel running smoothly.

Q: How is air travel critical to the economy?

Few people realize that one-sixth of the economy is generated by airport travel. Even if you only look at local municipalities, airports are important because they bring outside dollars, both national and international, to the surrounding region.

An airport is like a small city. While travelers think about cost, safety and convenience, ADCI has to consider the travelers’ needs, as well as that of the aircraft, roadways and facilities. This includes everything from roadways, walkways and buildings to signage and security screening systems. From a design standpoint, it also includes the geometry and pavement markings that pilots use to navigate planes on the tarmac, and the earthwork, drainage and sediment control to support the airport infrastructure.

Q: What is a typical day like in your business?

It’s a juggling act. Airport planning documents dictate what will be needed at an airport in any 20-year time frame. Projects typically take seven to eight years to implement, which means that while we are planning for 2020 projects, we are simultaneously designing projects planned five years ago and managing construction projects designed a year ago. As an engineer, however, the beauty of airport design is its versatility. One day you’re designing a tunnel, the next day you’re working on a de-icing apron, runway or terminal screening system. It’s never the same project twice.

Q: What projects are you particularly proud of?

I am proud of our award-winning design on the BWI Southwest Terminal because it was the first post 9/11 terminal in the country. ADCI took a parking lot, lowered it 18 feet, doubled the airports infrastructure for power, heating and air conditioning and mechanical systems, and built a 26-gate concourse with a terminal in between. The project included designing elaborate systems within the terminal infrastructure to screen baggage and remediating airport floors to support screening systems for people and carry-on luggage en route to the gates. We were also involved in designing passenger-screening lines to minimize congestion within the terminal.

ADCI is currently the project-lead for developing a runway safety area at BWI airport, which is significant because while it seems like we’re just touching 1,000 feet on each end of a runway, it’s a $350 million program that will ultimately improve air safety.

Q: What is most challenging about owning a small business?

What I do for a living happens to be engineering, but the combination of growing a business and developing my engineering career has been the most satisfying. As a business owner, I worry about providing trusted expertise people can count on. I believe this requires building quality personnel that can meet our industry’s need for services, while retaining the soul of a small company.

Q: How interdisciplinary is your work?

A terminal design might cross civil, mechanical and electrical engineering, as well as architecture and other specialties. In building the new Southwest terminal at BWI, for example, we are phasing the construction for the least impact to the airport. Sometimes this means working overnight and reopening a space in the morning to flights, for days at a time. Other times it requires reducing an 18-month project to a three-day runway closure, like on the recently completed pavement replacement of two intersecting runways at BWI [where Johnson’s team remained outside for 54 hours straight during construction].

Q: Was your company affected by the economic downturn?

As the economy suffered, ADCI expanded its services to include new markets, while retaining a core service area in Delaware, Maryland and Virginia. While many companies struggled, ADCI prospered, serving customers as far west as Ohio, as far north as Rhode Island and as far south as Florida.

Q: What kinds of details must you consider that aren’t obvious to the general public?

The Airbus A380, for example, is the largest commercial air carrier in the world. It can carry up to 800 people, but if we tried to de-plane that aircraft with only one passenger-boarding bridge, it could take up to two and a half hours. My team uses computer software to simulate how passengers move on and off the aircraft and how the aircraft is serviced for baggage, fueling, etc. Other concerns [the public may not think about] include ensuring that equipment is useful for a variety of airplanes and airlines and ensuring that pavement design is built for the appropriate aircraft size, weight and number of trips per day. Even the smallest details, like the air exchange systems that airplanes use prior to takeoff, or the bridge decks travelers use to get from the gate to the plane, can fall to ADCI.