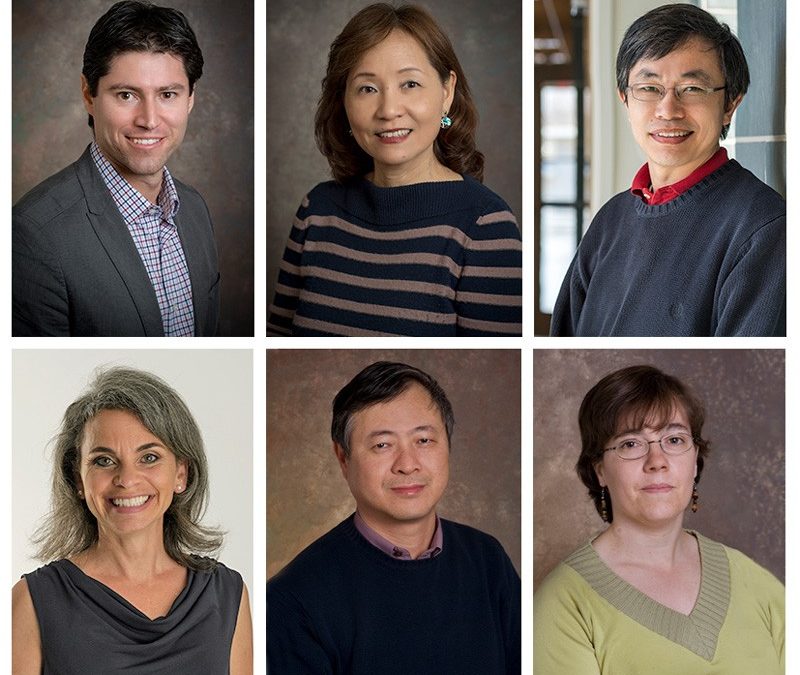 SIX UD PROFESSORS RANK IN THE TOP 1% CITED BY PEERS

Six University of Delaware professors are among the most influential scientists in the world, according to the 2019 Highly Cited Researchers list released by the Web of Science Group.

The global indexing service identifies researchers in the sciences and social sciences who produced multiple publications ranking in the top 1% by citations for their field and year of publication over the past decade, demonstrating significant research influence among their peers.

UD’s Cathy Wu, Cecilia Arighi and Hongzhan Huang were recognized for their impact in biology and biochemistry; Wendy Smith in economics and business; and Rodrigo Vargas and Yushan Yan in the “cross-field” category. This is the second year that researchers with cross-field impact — those with exceptional broad performance based on high-caliber papers across several fields — have been identified.

Wu, the Unidel Edward G. Jefferson Chair in Engineering and Computer Science and director of UD’s Data Science Institute, has been named a Highly Cited Researcher for the sixth consecutive year. She is a leader in bioinformatics, which combines biology, computer science, mathematics and statistics to extract meaning from massive biological datasets.

Wu also directs UD’s Center for Bioinformatics and Computational Biology and is the co-founder of the Universal Protein Resource (UniProt) Consortium. This international collaboration provides researchers with free access to a central hub for identifying protein sequences, the lineup of amino acids that determine a protein’s 3D structure and function, such as an antibody that binds to specific viruses and bacteria. The online resource receives over 6 million page views per month.

Many of Wu’s highly cited papers are related to this effort and are co-written with Cecilia Arighi and Hongzhan Huang, who also made the list this year.

“I am a big believer in team science,” Wu said. “Team building is essential to our multi-institutional consortium projects and also underlies impactful initiatives at UD, including the Data Science Institute, which brings together faculty from all of our colleges to address big data problems facing society.”

Wu received her doctorate in plant pathology from Purdue University.

Arighi, a research associate professor in the Department of Computer and Information Sciences, has been working with Wu’s bioinformatics team since 2005, first at Georgetown University, and at UD since 2009. She has a doctorate in biochemistry from the University of Buenos Aires.

“It is fantastic to know that the resources we develop are widely used by the community,” Arighi said. “It is really about the team’s recognition. Happy to be part of it!”

Writing high-quality papers and getting them accepted and published by journals requires time and attention to detail. Arighi’s favorite writing place is at home in her office with the big windows and matenearby. A tea-like, caffeine-rich drink, mate is the national beverage of Argentina, her homeland.

When she needs a break from writing, Arighi listens to music — “especially R&B or Latin music which really pumps me up,” she said.

Huang has been working with Wu for 20 years, first at Georgetown University, and then at UD, where he has been on the faculty since 2009. Originally from China, he holds a doctorate in genetics from the University of California at Davis.

“Being named a Highly Cited Researcher means the bioinformatics resources we developed are widely used by the scientific community,” Huang said. “It is great recognition for our team.”

Huang said bioinformatics is critical to scientific discovery in biology and human health, and that drives him to work on new and improved resources for the scientific community.

“Millions of people use the databases and tools we developed in their research,” Huang said. “This, in turn, inspires me to keep publishing.”

Professor of management in UD’s Lerner College of Business and Economics and co-director of the Women’s Leadership Initiative at UD, Smith is developing a paradoxical approach to managing the challenges we face as individuals and as leaders of organizations. She is exploring how people tend to look at tensions as an either/or choice, and how a both/and approach can open up new possibilities and be more creative and sustainable.

“An example from my own research focuses on how organizations can address both social missions and sustainability and financial demands simultaneously,” she said. “What I am most proud of is that more and more academics are using these ideas to help explain complex dynamics, and therefore helping people more effectively navigate those dynamics to lead to more effective companies and to a better world.”

Smith said she does her best writing in collaboration.

“Usually, if I have a difficult part of a paper to write, I will schedule a meeting with coauthors, talk it through, and then block out a good portion of time right after to capture those ideas on paper,” Smith said. “Coffee helps a lot. So does daily exercise!”

Smith received her doctorate in organizational behavior from Harvard. She joined the UD faculty in 2006.

Originally from Mexico City, Vargas has been on the UD faculty since 2012. He is an associate professor of ecosystem ecology and environmental change in UD’s College of Agriculture and Natural Resources, where his research focuses on how biophysical factors regulate carbon and water dynamics in terrestrial ecosystems. Specifically, he studies soil-plant-atmosphere interactions to understand the response of terrestrial ecosystems to management, extreme events and global environmental change.

He said he was particularly honored to be named in the “cross-field” category, which recognizes the interdisciplinary nature of his research.

“I am inspired by the fact that I can learn how nature works,” Vargas said. “Writing is a way to synthesize and share what we have learned to advance the science and apply new knowledge.”

Many of Vargas’ highly cited papers are a result of teamwork with scientists across the world, demonstrating the importance of data sharing and interdisciplinary collaborations.

He holds a doctorate in environmental sciences from the University of California – Riverside.

Yan, the Henry B. du Pont Chair in Chemical and Biomolecular Engineering, is an expert in electrochemistry and electrochemical energy engineering. Inducted into the National Academy of Inventors last year, he has been an inventor on more than 25 patents and is the founder or co-founder of several startups including W7energy, which designs, develops and manufactures polymer membranes for platinum-free fuel cells and clean hydrogen generation.

“Being recognized as a Highly Cited Researcher means to me that my publications may have had some impact on the work of others,” Yan said. “I am honored to be included in the list.”

He does most of his scientific writing in the quiet of his office or at home, although a fair portion is done on planes and at airports where he just tunes out the background noise.

“Although I try hard to advance fundamental science, what motivates me the most is the translation of that science into technology and innovation,” Yan said. “It has long been my aspiration that my work will someday make a difference.”

He has a doctorate in chemical engineering from the California Institute of Technology.

Article by Tracey Bryant | Photos by Office of Communications and Marketing