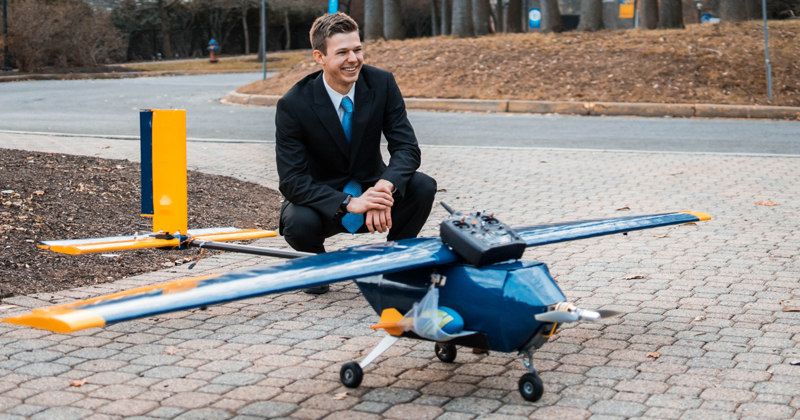 The group held their collective breath. The remote control airplane they had built had a successful takeoff in its maiden flight, but it still had to land.

As the wheels touched ground at Lums Pond State Park, Nick Vecellio and his classmates let out a roar.

“The first sigh [of relief] is it getting off the ground,” Vecellio, a senior on Delaware’s men’s golf team, said. “But then it still has to land, so that’s probably more nerve-wracking.”

At the beginning of the school year, engineering students were assigned to senior design projects. Vecellio, a mechanical engineering major, got his top choice: constructing an airplane for SAE Aero Design, an international Collegiate Design Series competition held by the Society of Automotive Engineers (SAE). Vecellio was one of 16 students that worked on the semester-long project with a budget of $3,500.

“The first month was basically all research,” Vecellio said. “We came in and two or three people had any prior knowledge on how to build an airplane or any of the workings of it. A lot of it was just like okay, how does a wing work? Do you need flaps? How does a tail work? How does it make a turn? How do the aerodynamics of it work?”

A monkey wrench was thrown into the team’s research when SAE released a new set of rules for the competition a month into the semester. In previous years, teams were tasked with dropping a water bottle from the plane onto a target. This year, teams had to drop three separate things onto different targets.

This was just the second year a Delaware engineering group worked on the project, and Vecellio’s group was the first to send a plane to the competition held in Fort Worth, Texas. The competition conflicted with a golf tournament, but Vecellio ended up missing both with the flu.

“I lived vicariously through them over the weekend,” Vecellio said. “Didn’t get to go, but the whole process leading up to it was a great bonding experience. So many people, so much time, so many late nights spent together.”

While the plane didn’t complete the drop tasks due to high winds, the group was just happy it successfully flew at the competition against teams with much more experience and much bigger budgets.

The Fogelsville, Pa., native started playing golf when he was two years old with miniature clubs his grandfather made for him. A self-described late bloomer, Vecellio had a handful of Division II and III offers coming out of high school, but opted to come to Delaware and join the club team.

He played club golf for three years, rising to club president and the team’s top scorer. When Patty Post became the Director of Golf Programs, Vecellio reached out to the coaching staff and secured a try-out. After a successful round, he walked on to the team and regularly competed in the Blue Hens lineup this season.

“I absolutely love it, it’s so much fun. I enjoy working on my golf game,” Vecellio said. “I’m always working, always asking questions. It’s been a good ride. I was voted one of the two captains this year. I came a long way in just a year and a half. I really enjoyed it.”

The mindset of a successful golfer, endlessly tinkering with their swing to fix problems and maximize efficiency, translates well to mechanical engineering. Just as he would work to fix slicing a driver, he works to fix the aerodynamics of the airplane’s wings.

“With both, there’s always setbacks. With golf, you’re never going to get perfection, there’s always some new problem that arrives. That’s kind of the same with the plane,” Vecellio said. “Every time we get somewhere, they change the rules. This engine wouldn’t work for some reason, or this wingspan wouldn’t work. So you have to take it all in stride, kind of like you’re golfing. You know there’s problems that are going to arise. Don’t freak out, take a step back and look at it and figure out why and how you can go forward.”

The project served as a great practice of the skills that Vecellio developed through both engineering classes and golf, and as an introduction to the aerospace sector of the industry.

“It definitely opened my eyes to the whole industry behind aerospace and aerodynamics engineering, just everything about it,” Vecellio said. “It was cool to see the culmination of your engineering career, because that’s what this is.”