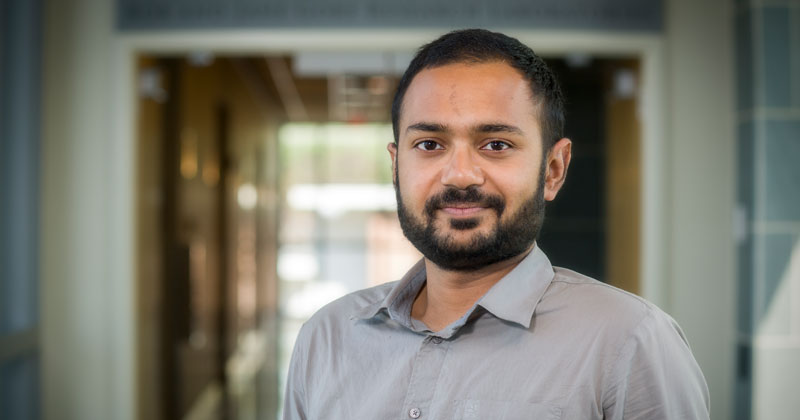 Chemical engineering student recognized for interests outside the classroom and laboratory

Graduate students don’t have a lot of free time, but when Himaghna Bhattacharjee has a spare moment, he makes the most of it.

The first-year doctoral student in chemical and biomolecular engineering has more than a few hobbies. He’s a photographer with a darkroom in his basement. He reads two novels a week. He has played bass guitar for a dozen years. He joins his labmates for pickup soccer games. He watches science fiction movies. He constructs social commentaries out of Legos. He already speaks seven languages, but he is trying to pick up another one—Spanish.

For the committee behind the University of Delaware’s Laird Fellowship—an annual award that helps one first-year engineering graduate student pursue interests beyond his or her field of study—Himaghna’s broad and deep pool of interests, especially his talent in photography, made him the clear choice for 2018.

“The selection committee looks for someone with a balanced portfolio: academic excellence, perseverance, creativity, humor, and more,” said Ajit Thyagarajan, president of the Laird Fellowship and founder and chief technology officer of Atomic Mole, a cybersecurity company.  “Himaghna fit those requirements. What stood out for us was his ability to travel the world with a camera and tell a story with his pictures, capturing touching moments and articulating the meaning behind what he was seeing.”

From India to France to UD

Himaghna grew up in India and went to college there. He studied chemical engineering and joined a photography group during his undergraduate years. In the final year of his graduation, he bought his first camera and started packing it on his adventures.

For two weeks, he lived with a fisherman in southern India, taking pictures of fishermen in boats and scenes on the shore. During a stint working for Michelin in France, he would spend his vacation time traveling around Europe and taking photographs of fjords, forests, the Danube, and more. He has visited 32 countries in total.

After two years, Himaghna grew restless. A futurist at heart, he longed to develop and understand emerging energy technologies.

“If there is one area where you can make the biggest impact on the future, it is energy,” he said.

That’s why Himaghna came to the University of Delaware.

“I knew I wanted to work in catalysis, and UD is one of the best places in the world for catalysis,” he said.

He specifically hoped to work with two professors that both advise and mentor him: Dionisios Vlachos, the Allan and Myra Ferguson Professor of Chemical and Biomolecular Engineering and director of the Catalysis Center for Energy Innovation and director of the Delaware Energy Institute, and Yushan Yan, associate dean for research and entrepreneurship in the College of Engineering.

“Himaghna has a very diverse set of skills and interests. He is remarkably mature and driven for the stage of his career,” said Vlachos. “He has made great progress on studying on the computer the mechanism by which renewable derivatives of biomass are converted into dienes, the molecules we use to produce tires for bicycles and cars. His work can enable the commercialization of renewable tires manufactured from waste, leaves, and trees.”

Himaghna aims to use computational tools to understand how the surface environments of catalysts, substances that speed up chemical reactions, encourage or discourage these reactions.

Yan, an expert in catalysis, nominated Himaghna for the Laird Fellowship.

“I have been impressed by Himaghna since before he even came to UD,” said Yan. “At UD, he has shown great enthusiasm for catalysis, and he excelled in my Electrochemical Energy Engineering course. More importantly for the Laird Fellowship, his wide interests and experiences beyond the traditional academic excellence made him the ideal candidate for the selection committee.”

Himaghna has many aspirations for how he will utilize his expertise in catalysis. For one, he aspires to start a technology company someday.

“It’s been a long dream of mine to work on something that addresses the energy crisis,” he said.

He has not yet decided how he will spend the prize money from the Laird Fellowship, but he might put it toward his photography habit. As he optimizes his free time, Bhattacharjee has his eyes firmly focused on what’s next.

“I am very excited about the future,” he said.

About the Laird Fellowship

The George W. Laird Merit Fellowship is given to honor the memory of George W. Laird. He earned an A.B. degree at Hamilton College in 1964. He then attended the University of Delaware, where he was awarded a B.M.E. degree with highest honors in 1968 and an M.M.A.E. degree in 1971. On Sept. 6, 1977, at the age of 35, George W. Laird was killed in a tragic accident.

Determined that something positive should come from this seemingly senseless loss, his family and friends established a fund to support a major fellowship, based on merit, that will provide a source of strong motivation to students working toward graduate degrees in the College of Engineering. The generous support of more than 300 donors has made this award possible.