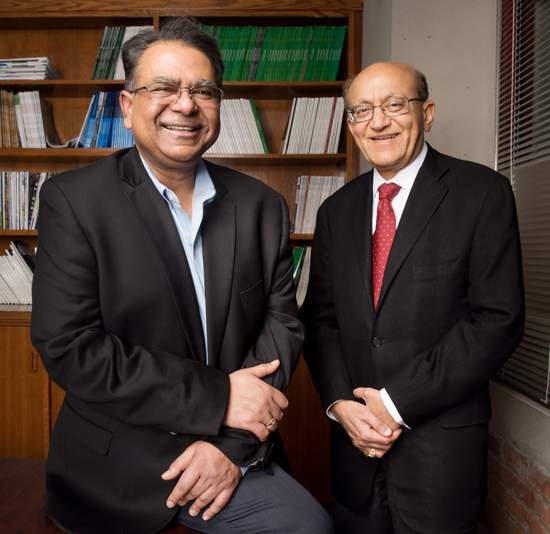 As a research facility at one of America’s top hospitals buzzes with activity, two men chat in a narrow, unassuming office. One is jaunty, with a smile as his default facial expression and a melodic lilt to his voice. The other is more reserved and speaks with a softer, deeper tone.

They haven’t seen each other in about a year and a half, but once they’ve shaken hands, their conversation immediately turns to science. When your work has the potential to save millions of lives, that’s what you do.

Rakesh K. Jain, COE74M, 76PhD, has spent decades working on some of the world’s most pressing health problems, and has come to be regarded as one of America’s most accomplished scientists. Arup K. Chakraborty, COE88PhD, is tackling one of the world’s most elusive challenges: creating a vaccine for the human immunodeficiency virus (HIV), the causative agent of AIDS.

Both professors are where they are today partly thanks to the school that helped set their scholarly paths: the University of Delaware.

Jain, who is the Andrew Werk Cook Professor of Tumor Biology at Harvard Medical School, is responsible for a game-changing paradigm in cancer treatment: By normalizing the function of blood vessels in tumors, he discovered, one can treat the tumors more effectively. In 2014, this principle led to the approval of the first medical treatment for patients who lose their hearing from a benign tumor, known as schwannoma-UK. This principle has the potential to improve treatment of more than 70 different diseases that afflict half a billion people around the world.

As director of the nearby Institute for Medical Engineering and Science at the Massachusetts Institute of Technology, Chakraborty is the Robert T. Haslam Professor of Chemical Engineering, Physics and Chemistry. He spends his days targeting another deadly disease: HIV. He is attempting to manipulate adaptive immunity—part of the immune system that targets and destroys harmful germs in a pathogen-specific way—to create a vaccine that prevents infection from the deadly virus.

These men have more than success in common. Their paths have also been studded with a few of the same milestones. Both earned their undergraduate degrees at the Indian Institute of Technology Kanpur. Both earned their doctoral degrees in chemical engineering at UD, where they tackled and completed thesis projects that defied the norms of their eras. Both teach and conduct biomedical research in Boston, at two of the world’s finest universities.

Both also set the stage for their success at UD.

TO HARVARD, VIA DELAWARE

Jain’s passion for education may have been predestined. A century ago, his grandfather started a school near his hometown in India. As an undergraduate chemical engineering student at the Indian Institute of Technology Kanpur, Jain read three textbooks by Mort Denn, then a chemical engineering professor at UD. He was so intrigued that he came to Newark in 1972.

“I had great teachers at Delaware,” he says. “Stan Sandler was a model for how to teach thermodynamics. Mike Greenberg was the most incredible math teacher. Eli Ruckenstein infected us with a passion for science. Art Metzner was an inspiring department head.”

Outside the classroom, Jain learned about American life. He had come to UD with no cooking skills, but during his first year, he checked cookbooks out of the library and devoured them. By the end of the year, he cooked lasagna for 60 of his new friends.

As planned, Jain did research with Denn, building mathematical models of pollution control in the Delaware River. Denn also encouraged Jain to travel to New York City and see the Museum of Modern Art and Guggenheim, which fostered his enduring love of art. James Wei introduced Jain to the opera, inspiring a lifelong love for music.

He would finish his master’s degree in two years, and could have earned his doctoral degree at an unusually fast pace with just another year or two of work on Denn’s project. But then, Jain got an opportunity for a new doctoral thesis project under the mentorship of Prof. Wei that would change his course—and the future of medicine.

In 1974, Jain and Wei visited the late Pietro M. Gullino, then a leading researcher at the National Cancer Institute in Bethesda, Maryland. Gullino showed Jain a new model of a cancerous tumor that he had developed to study its biology. While tumors usually have many blood vessels coming in and out, Gullino had created a tumor with a single artery and a single vein. “One input, one output,” Jain explains of the model. “That’s what engineers do, input/output analysis. Now all the concepts available to engineers and to physiologists could be applied to cancer.”

This approach was revolutionary, and Jain had an immediate question: Had anyone used this new model to study how cancer drugs infiltrate a tumor—or don’t? To be effective, the medicine needs to stay in the tumor long enough to kill it. No one had yet addressed this, so Jain did.

“I was being allowed to do a Ph.D. in something you would never have imagined being conducted in a chemical engineering department anywhere in the country,” he says. “That really was the beginning of a whole field of applying engineering principles to cancer research.”

When Jain took on the project, he didn’t know anything about cancer research. He locked himself in a room for a week and read a human physiology textbook cover to cover. It paid off. In his doctoral thesis, he described how drugs flow into and out of solid tumors. “If you are too comfortable, that means you are not pushing the boundaries,” he says.

After graduating from UD, Jain was a faculty member at Columbia University and then at Carnegie Mellon University. In 1983, he visited UD to deliver the Allan P. Colburn Memorial Lecture, a talk by a distinguished early-career chemical engineer. Chakraborty, then a first-year graduate student, was in the audience.

“That’s when I first heard him give a talk, and I was extraordinarily impressed,” says Chakraborty. Their formal introduction would come later.

Jain would leave Carnegie Mellon for Harvard Medical School and Massachusetts General Hospital (MGH), where he has conducted basic research since 1991. Although he doesn’t interact with patients—he’s not a medical doctor—he hears stories from surgeons who’ve felt rock-hard tumors soften to spongy masses thanks to one of his pioneering therapies. He attributes his success to hundreds of collaborators all over the world, and to more than 200 exceptional graduate students and post-docs.

“The advice I give to young people is: You are going to enter a world where you have to be an entrepreneur to survive,” he says. “You need to have an entrepreneurial bent. You need to think about translating your basic research from bench to bedside.”

TO MIT, VIA DELAWARE

Like Jain, Chakraborty learned about UD’s chemical engineering excellence as an undergraduate student at the Indian Institute of Technology Kanpur. He was inspired by the late Ken Bischoff, a leader in chemical reaction engineering. “I had read many of his papers and thought it was really brilliant stuff,” Chakraborty says. “I went to UD to work with him.”

Chakraborty did indeed work with Bischoff, who co-advised him along with the late Gianni Astarita. Like Jain, Chakraborty forged a path that had not yet been cleared, or even stepped upon. He did research that represented a new interface of disciplines, bringing quantum mechanical theory to chemical engineering problems. It was a risky move.

“One of my thesis advisers told me that he encouraged it, but he didn’t know whether I would succeed and whether I would get a degree or not,” says Chakraborty, who asked longtime UD professor Robert Pigford for advice. By this time, Pigford was “the senior statesman on the faculty.”

“He asked me: ‘Well, do you think that it’s a good direction to go in?’ I told him I did. ‘Well then,’ he said, ‘you should do it,’” Chakraborty recalls. Pigford gave Chakraborty a copy of a groundbreaking, rule-defying book he had published in 1947 as a graduation gift: The Application of Differential Equations to Chemical Engineering Problems. The volume, now with a weathered cover, sits on a shelf in Chakraborty’s office at MIT.

“When he was doing this, this is not what chemical engineers were doing, differential equations in chemical engineering,” he said. “The field was much more macroscopic then. This was a revolutionary thing on its own.”

Chakraborty forged ahead. He worked hard but had fun, too. He and his classmates enjoyed beer and onion rings at the Deer Park every Friday. They ate at the now-shuttered Roy Rogers on Main Street—and at the “upscale place,” Klondike Kate’s. He also introduced some friends to Indian food in Philadelphia (at the time, there were no such restaurants in Newark). An avid tennis player in his youth, Chakraborty picked up racquetball at UD, playing against students and faculty members. When he returned to campus in 1993 to give the Colburn lecture (the same distinguished seminar Jain gave 10 years before), he challenged the undefeated Prof. Michael Paulaitis and won.

“UD was not just the place where I was educated as an engineer and scientist,” he says. “It was where I learned about America, and decided that I wanted to spend my life here.”

After graduation, Chakraborty joined the faculty at the University of California-Berkeley, where his faculty mentor was none other than Mort Denn, the man who had inspired Jain to attend UD nearly two decades earlier.

“We had coffee most mornings, and I always learned from him,” Denn says of Chakraborty. “He has always had a remarkable command of the relevant science.”

A few years later, when Jain visited UC-Berkeley for a seminar, Denn and his wife invited Jain and Chakraborty to dinner. It was the first time the two Blue Hens would meet.

That was nearly two decades ago. Some years later, while still at UC-Berkeley, Chakraborty read a paper on the immune system that made him curious in a way he hadn’t felt in a long time. He decided to explore the concepts in the paper further—a pivot from his earlier research.

Not all of his colleagues were supportive. “Most people thought that this was a very risky move, a bad move, but that’s what I wanted to do,” he says, adding, “You might strike out if you swing for the fences, but you could also hit a home run.”

Chakraborty left Berkeley in 2005 and joined MIT’s faculty. Since 2009, he and his colleagues at MIT have been working on rational design of vaccines against highly mutable pathogens, especially HIV.

Chakraborty doesn’t regret his path to immunological research. In fact, he thinks of it as one of the most significant and satisfying things he has done—a success he attributes to his curiosity.

“Passion for what you do affords a certain freedom in life, says Chakraborty. “I really believe we only excel in the things we care about.”