Couple Builds a Thriving IT Enterprise 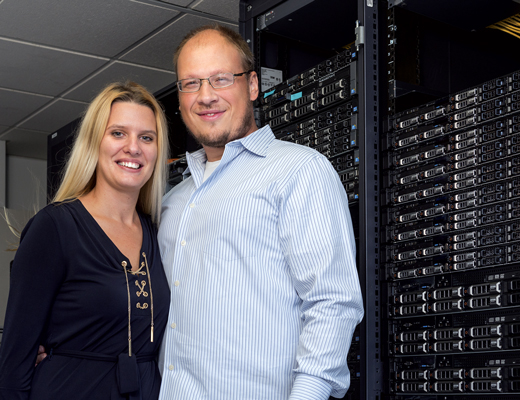 Vess Bakalov, EG99, and Tanya Bakalov, BE04, both originally from Bulgaria, met at a campus party as UD students, “and the rest is history,” Tanya says with a laugh.

The couple went on to found SevOne, an IT performance management company that has, since its beginnings in 2005, garnered accolades from such sources as Deloitte and Inc. magazine. It’s been named one of the nation’s fastest-growing private companies, a model of innovation and agile business solutions and a “Top 10 company to watch.”

In 2013, SevOne raised $150 million in funding led by Bain Capital Investors, and earlier this year, the company acquired the data analytics firm RapidEngines. With 65 percent year-over-year revenue growth for the past three years, SevOne now has more than 300 employees—many of them UD alumni—and offices in Philadelphia and Boston, as well as in northern Delaware.

The Bakalovs sat down recently to talk with the UD Messenger about their lives and careers, how they’ve built and continue to build their business and why they will always maintain a strong connection with the University of Delaware.

Q: Going back to the beginning, what gave you the idea for starting a business of your own?

Vess Bakalov: After graduating from UD, I was working at a big financial institution. After a while, one thing led to another and I was put in charge of some of the IT management. The problems became immediately obvious to me that the systems—our performance management systems—just did not scale well. They were too slow for a big organization. When there were problems with our data, we weren’t getting those reports fast enough. I was working with another UD computer science graduate, Jim Young [EG00, who continues to work with Bakalov at SevOne], and we came up with the idea for the architecture for a new system that could scale up well. We knew this could be big, that it would make our product special.

Q: Was it hard to take that next step and become an entrepreneur in spite of the financial risks?

VB: Once we decided that’s what we were going to do, we moved ahead. Tanya and I got married on July 2, 2005, and as soon as we got back from our honeymoon, I gave my two weeks’ notice and left my job. So that’s how we started our life together. Then, six months later, I convinced her to quit her job.

Q: So, Tanya, was your decision to leave your job an even bigger leap of faith?

Tanya Bakalov: My dream was to work in one of the “Big Four” accounting firms, and my dream did come true. Right after I graduated, I started working for Deloitte in one of their fastest-growing units. I had a lot of Fortune 500 clients, I traveled a lot, and I quite enjoyed it. But then Vess’s idea became a prototype, and he convinced me to be the first salesperson. So I joined him in December of that first year.

VB: Yes, here I was, trying to convince an accountant to quit the only paying job in the household. It was a pretty tough sale. I would say this was the best sale of my life; there was no way we were going to get this off the ground without her joining us.

Q: What was the business like in the early days?

TB: Vess had opened a tiny office, in a garage-like building, on Main Street in Newark. We used to say,

“We’re located behind the comic book store,” and people would laugh, but that’s really where we were. He hired two UD juniors to start, who are still with us today—one is our director of architecture and the other is our director of product management—and we built the company around them. Neither of us knew anything about sales, we didn’t come from a sales background, so it was a steep learning curve to figure out how to build a product, sell it, service the product that we built and build a company at the same time. It was an interesting challenge and an interesting couple of years in the beginning.

VB: Our product is extremely appealing for large organizations, but it takes some time to sell to them. It was only in our second year of existence that we were able to win our first large account, which was Comcast. For a young company like us, that was a coup.

It’s a very long sales process, six to nine months for most of our customers. We understand that, because this is a very massive decision for a company. For the people making these kinds of decisions, they are very much giving us a vote of confidence with their own careers. If they make a mistake with such an important piece of the infrastructure—if they buy the wrong product from the wrong company—it could cost them their job. So we take our customer satisfaction to the next level because we understand this is a partnership. Many of our competitors are companies that are in the Fortune 100 and for a customer to take a chance, especially in the beginning, and go with a lesser-known name like SevOne, that’s something we took very seriously.

Q: In addition to your emphasis on customer service, what about your product do you think has been key to your success?

VB: We provide continuous, real-time visibility about how every piece of the customer’s infrastructure is working—from the servers to the network links to the security firewall, the storage, etc., all across the delivery chain of application. We assure the performance of every single component along the path.

TB: Imagine you want to buy a smartphone, so you go to a Verizon store, and within minutes, you want to be able to make and receive calls on your new phone. We want to enable the store to see that all the systems they need are working: Were you able to get the phone and keep your number? Was the number able to authenticate with the cell towers? Did the store’s billing interface with the financial institution to charge your credit card? Is the store network connection good enough that they’re able to process your order? Any single piece of the operation that touches anything electronic, we can monitor.

VB: All along the path, wherever anything gets slow, people get unhappy very quickly. Our job is to give all the IT people at the company a very timely view of everything that is happening. But we also allow them to predict in advance how things will be happening, including potential problems. That’s what we offer them: A way to head off problems and to make good decisions about how to spend their IT budgets. Every minute, we will be collecting data from 200 million different performance indicators. It’s all being tracked, so it can be analyzed at any point. And then we store it for up to a year so it can continue to be analyzed.

Q: You’ve expanded very rapidly. Do you expect that to continue?

VB: I see us continuing to grow. More and more it seems that IT isn’t just part of what supports a company; it’s what really defines a company.

Q: You have a lot of UD students as interns, and you hire many UD alumni. Is that because of your proximity to Newark, or do you specifically seek them out?

TB: Both, actually. We have a close relationship with UD because we’re here in Delaware, but also because of the quality of the students and graduates. We’ve grown people here from interns to very successful senior executives. We use UD interns in every department of the company. We’re very big believers in internships because both of us worked while we were in school, and those opportunities shaped us and the way we thought. We attribute a lot of the success of this company to hiring smart, talented kids out of college and grooming them.

VB: Grooming them, that’s very important, grooming them to be the next level of managers in the company. We recently opened an office in Philadelphia, and we hope to take advantage of some of the schools in that area as well, but the University of Delaware remains our primary source. Our turnover is probably one of the lowest in the industry. We’ve been told that we sort of provide the Silicon Valley experience in Delaware for our employees.

Q: What do you think about UD’s increased emphasis on entrepreneurship education?

TB: We stay very involved in the [Lerner College’s] Horn Program in Entrepreneurship. We’ve spoken at a few events for students, and we’re always invited to the Venture Development Center when they have events. These programs didn’t exist when we were students, and I don’t think either of us thought of ourselves as entrepreneurs. It wasn’t a modern thing to do at the time, the way it’s evolved in the last two to three years.

VB: When I first graduated, in the Class of ’99, I didn’t know of a single venture company in this area. Nothing in my training prepared me directly for any of this.

TB: We didn’t know what “venture capital” meant until we needed money! And now everybody knows what it is. It’s only a few years ago, but things have really changed, and there are so many great resources available now for anyone who wants to be an entrepreneur.

Interviewed by Ann Manser, AS73