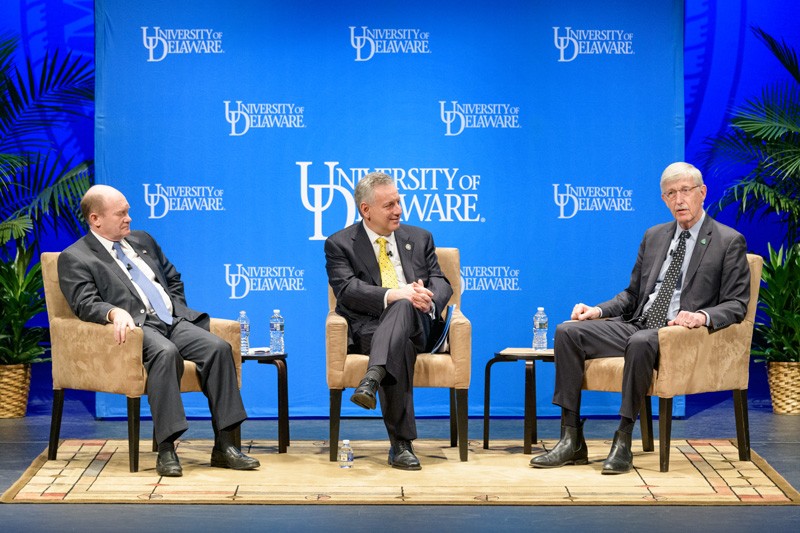 But Collins’ first visit to the University of Delaware on Friday, March 1, seemed more like facetime with a trusted mentor, someone who listens carefully to your ideas, cheers you on and, if you make a good case, even helps your great ideas get traction.

The NIH has invested hundreds of millions of dollars in UD research over the years, including $34 million in fiscal year 2018 alone — making it the single largest sponsor of UD research during the past year.

At the start of his first visit to the University of Delaware, Dr. Francis Collins (center), director of the National Institutes of Health, had a breakfast meeting with some of Delaware’s top leaders, including (from left): Gov. John Carney, U.S. Sen. Chris Coons, UD President Dennis Assanis and U.S. Sen. Tom Carper.

During his visit to UD, Collins connected with those on the front lines of research, toured some of the new and expanding facilities in UD’s research enterprise, talked to University students about his work and theirs, and shared a breakfast meeting with President Dennis Assanis and some of Delaware’s top elected officials — including U.S. Sens. Tom Carper and Chris Coons and Gov. John Carney.

In a tour of labs on the STAR Campus and the Center for Biomedical and Brain Imaging, Collins saw NIH support in action.

And during the main event — a “fireside chat” with Coons, moderated by Assanis — Collins had opportunity to discuss publicly why research matters so much to the future of the nation and the globe.

He sees UD as an ally in that work, calling it a “very vibrant research community,” and said he will take ideas gathered during his visit back to colleagues and staff in Washington.

Assanis proclaimed it “a very, very bright day for us — a joyous day and a great honor for our institution. Health and wellness issues are probably the most important facing the world today, and a significant focus of the University’s work”.

Assanis’ questions revealed not only interesting information and insights, but also essential qualities of both guests.

Asked for his top three priorities for NIH now, Collins said he could name 29 or more — then settled on these: cancer, vaccines and opioid addiction.

Some of the challenge of delivering new, more effective medication is in the wheelhouse of the UD-based National Institute for Innovation in Manufacturing Biopharmaceuticals (NIIMBL), a large public-private partnership directed by Kelvin Lee, Gore Professor of Chemical and Biomolecular Engineering at UD.

Collins said he was glad to learn more about NIIMBL, which will have its headquarters in the Ammon Pinizzotto Biopharmaceutical Innovation Center now under construction on UD’s Science, Technology and Advanced Research (STAR) Campus. NIIMBL’s mission is to make the revolutionary impact of these new medicines more accessible and Collins sees that as a critically important piece of the challenge.

Underscoring the potential of NIIMBL, he pointed to an Ohio researcher’s work with spinal muscular atrophy, which leads to degeneration of cells in the spinal cord and is usually fatal if there is no intervention. Children usually die within a year. With a single infusion, Collins said, all 12 of the children who were treated are still alive three years later.

“To scale that up and deliver it — I’m excited that NIIMBL will be in the middle of that,” Coons said.

Getting useful research to the marketplace is another challenge, he said during a discussion of intellectual property rights. There are two major camps, he said — those who see property rights as just another speed bump on the road to innovation vs. those whose research and inventive minds have produced the new things.

“We don’t want great work happening in our laboratories that never makes it to commercial use,” Coons said. “But we’re also pushing back against intellectual property theft.”

Assanis turned the discussion to another critical issue for geneticists, especially, and scientists in general: Breakthroughs in gene editing and ethics. And noting that both men share an interest in religion and spirituality, he asked how their religious beliefs have potentially influenced their work.

The technology has exciting potential for addressing disease, Collins said, but he believes it has advanced far more quickly than essential ethical considerations.

He and other leading scientists — including some of the inventors of the technology — have called for a worldwide moratorium on its use for at least five years. He pointed to recent human embryonic editing done by a researcher in China — work that would be a criminal offense in the United States. The participant family was misinformed, the consequences of the process are unknown and safeguards were not in place, he said.

“For me, as a person of faith, I have to ask: Are we ready to step into the role of being a creator versus being the created?” Collins asked. “Is this a line we ever want to cross again? I can’t come up with many medical reasons we need to do this.”

Addressing disease with precision — as researchers are working to do with conditions such as sickle-cell disease — is an attractive and promising use of genetic technology, Coons said.

“But with gene editing of human embryos — we have no grasp of the consequences,” Coons said. “All of us should be attentive to the ethical consequences.

“We are at the dawn of a new era in medicine and science,” he said. “We’re at one of those turning points. What was previously science fiction has become science fact…. And we will have to live with the consequences.”

“If we are contemplating re-engineering ourselves, we have to stop and have that conversation,” he said.

Coons, who has a degree in science and also graduated from Yale Divinity School, said he approaches the intersection of religious faith and public service “with humility,” recognizing the many diverse traditions represented in Delaware and the nation and also the liberty the United States promises and represents.

Collins’ best-selling book The Language of God describes how he moved from atheism to Christian faith.

“I see that science and faith are wonderful ways to investigate what is real and what is true,” Collins said. “If you’re asking about nature, science is the way to go. But if you’re asking ‘why am I here?’ science doesn’t help much. I am one of 40 percent of working scientists who believe in a personal God. I believe it is very possible to put science and faith together.”

Benevolence, justice and equity are values shared by ethicists regardless of their religious backgrounds, Collins said.

“Science is not in conflict with faith,” he said. “If anything, science is a pointer to faith. But you have to be careful with that.”

One of the labs NIH Director Francis Collins and others visited was the Vascular Physiology Lab directed by Prof. David Edwards, who studies vascular function. Jordan Patik (far left), a postdoctoral fellow, explains part of the research process.

Coons then turned things a bit, noting a striking decline in some people’s faith in science.

“As someone with a deep respect for the discipline of science, I feel we must redouble our efforts to engage all Americans,” he said. “Science is an absolutely critical tool for examining, learning from and coming to consensus about the world we inhabit.”

Though the NIH has “health” in its name, Collins said most research has been disease-related. It has “under-invested” in research on preventing disease.

“What should we be doing to stay healthy?” he said. People too often get “one-size-fits-all” lists of what is necessary.

To move to individual precision, you need data, he said.

He pointed to a new NIH initiative — the “All Of Us” Research Program — that aims to broaden understanding of human health. The goal is to get 1 million people to share information about their health, including medical records, DNA sequencing, blood samples and data from wearable sensors (such as fitness-tracking devices).

Personal data would be provided to each participant, but it would be made anonymous when provided to researchers, who would benefit from an enormous sample that could produce tremendous insights into how to keep people healthy.

Almost 200,000 people had registered to participate as of last May, he said. Kids will be added to those eligible to join this year.

The wide-ranging discussion was heartening to many in the audience.

“I was inspired and informed by the entire Fireside Chat,” said Dawn Elliott, chair of UD’s Department of Biomedical Engineering. “I particularly enjoyed the thoughtfulness and care with which each of them approaches their personal faith and their professional responsibilities. The final call from Sen. Coons for our country to return to a ‘faith’ in science is critical and timely.”

Jacob Capin, a doctoral student in physical therapy and biomechanics, said he was glad to hear from these leaders and grateful for the support he has received from NIH.

UD neurobiologist Dayan Knox (left), who is part of the NIH-funded Delaware Center for Neuroscience Research, talked about his studies about the effects of traumatic stress during NIH Director Francis Collins’ visit.

“It is a relief to hear the advocacy from the NIH director and from Sen. Coons,” Capin said. “To know they are on the side of research is really outstanding. I wouldn’t be here without that support.”

Capin was one of more than a dozen students from UD and Delaware State University who met with Collins in a roundtable discussion earlier in the day. All are working on projects supported by NIH.

Researchers from UD, Delaware State University, Delaware Technical Community College, Wesley College, Christiana Care and Nemours have found great traction in their work through NIH’s IDeA (Institutional Development Award) program, which has invested $276 million in biomedical research in Delaware over the past two decades. That support has produced an additional $485 million in new grants as the research advances to new levels.

With these funds, labs can hire more researchers, acquire essential equipment, develop core facilities and expand student programs. All of that points to new generations of physicians, health care workers and scientists.

Collins saw ample evidence of the IDeA program’s impact and benefit as he and others toured several labs and talked briefly with researchers.

One researcher was Prof. Darcy Reisman, who works with patients recovering from stroke. Her early research support came through the IDeA program, she said, and has produced additional grants. In her lab, Collins met Sam Kanefsky, who told him he had suffered a stroke about two months ago. Kanefsky, who now volunteers in the program, walked on a treadmill during the visit.

They visited researchers Dave Edwards and William Farquhar at the Center for Cardiovascular Health, a COBRE program, and UD’s Physical Therapy Clinic, directed by Prof. Greg Hicks, which supports research and education and provides outpatient therapy to the UD community and the public.

On UD’s central campus they stopped at the Center for Biomedical and Brain Imaging (CBBI), where Director Keith Schneider showed Collins UD’s two research-dedicated functional magnetic resonance imaging (fMRI) instruments, so named because they provide images of real-time function, showing researchers exactly where neurons are most active at any given time, in a safe, non-invasive way. While in CBBI, they also heard from researchers Curtis Johnson, Naomi Sadeh and Dayan Knox, all of whom get NIH support for their work, and from students Dan Smith, who is involved in concussion research, and Andria Farrens, working with fMRI-compatible robots.

As impressive and fascinating and promising as all of that was, it was only scratching the surface of the work underway at UD. And the national IDeA program — in which UD participates — represents just 1 percent of the annual NIH budget, Assanis noted.

“Can you imagine what [our nation] could do with 2 percent?” he asked Collins with a smile.