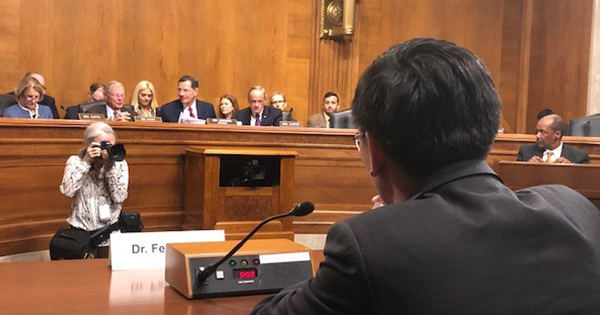 Feng Jiao, a University of Delaware chemical engineering professor, spoke at a hearing of the U.S. Senate Committee on Environment and Public Works on April 11, 2018.

The subject of the hearing was S. 2602, the Utilizing Significant Emissions with Innovative Technologies Act, or USE IT Act. This bill was introduced on March 22, 2018 to “support carbon dioxide utilization and direct air capture research, to facilitate the permitting and development of carbon capture, utilization, and sequestration projects and carbon dioxide pipelines, and for other purposes.”

Jiao, an associate professor of chemical and biomolecular engineering and associate director of the Center for Catalytic Science and Technology at UD, was invited to the hearing by Delaware Sen. Thomas R. Carper, ranking member of the Environment and Public Works Committee.

Jiao has 15 years of experience in research and development of electrochemical technologies for energy storage and conversion. His research group at UD has received funding from federal agencies including the National Aeronautics and Space Administration, Department of Energy, and National Science Foundation. He is developing processes to electrochemically convert carbon dioxide to high-value chemicals, including alcohols such as propanol.

In written testimony submitted to the Environment and Public Works Committee, Jiao described how carbon utilization can help to mitigate the problem of rising atmospheric carbon dioxide levels—which has climate impacts. At UD, he focuses on electrochemical conversion of carbon dioxide. This approach has several advantages, one of which is the ability to be powered by carbon-free energy sources such as wind or solar power. His recent research suggests that carbon dioxide electrolyzer technology can even be profitable under the right conditions.

He also offered a condensed version of his comments as oral testimony.

“More R&D [research and development] efforts are urgently needed in the U.S. to further this technology as well as other CO2 [carbon dioxide] utilization technologies so that we can be the global leading technology providers,” he told the committee.