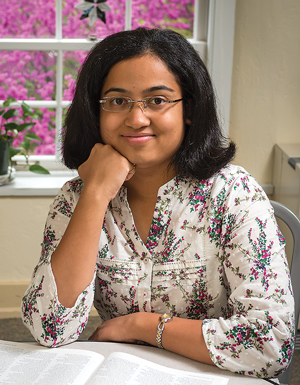 In 2008, Asmita Atre became the first international student to earn a graduate degree entirely online from UD’s College of Engineering, when she completed her master’s degree in mechanical engineering from her home in Pune, India.

Today, Atre is a budding entrepreneur working to turn the common Indian cottage industry of jaggery making into a factory franchise, while also helping neighboring farmers improve their standard of living.

Jaggery is a traditional Indian sweetener manufactured by crushing sugarcane and boiling the juice. It is used daily in India, the world’s second-largest sugarcane grower, to flavor savory cuisines such as curry as well as in desserts and candies. “Jaggery making is conventionally a handcraft, where sugarcane juice is boiled in an inefficient open pan process,” says Atre, a process engineer with degrees in chemical technology, mechanical engineering and engineering technology management. She says India is home to about 40,000 independent jaggery-making units.

As an engineer for her family’s energy efficiency and resource conservation company, Atre is always looking for opportunities to conserve energy and better society. She conceived the idea for improving the jaggery manufacturing process with the help of her brother Anand, a food science expert; Anand Teke, a childhood friend who specializes in sustainable energy technology; and Sham Bhor, an expert in energy project management and sugarcane farming.

“Our business model can revolutionize jaggery making into a factory business that will result in higher-quality jaggery with a longer shelf life, bottled drinking water and renewable fuel biomass, which will provide a better bargaining power [for suppliers] in this commodity market and also improve operating margins,” Atre says.

Atre’s proposed manufacturing process is based on patented technology and has already has been recognized with innovation awards from the Indian government’s National Resource Defense Council and the World Intellectual Property Organization.

The business model calls for partnering with farmers who produce sugarcane that cannot be processed by their local sugar mill and who have no reliable method to extract the sweetener. With the new process, these local farmers will grow the sugarcane on their individual farms, harvest it and sell it to the factory. The farmers will also have the opportunity, if they choose, to work in the factory processing the sugarcane, earning additional income while also creating production and labor efficiencies.

“This way, the farmers themselves can take pride in the factory, help run the plant and earn salaries to improve their standard of living,” Atre says.

Her design employs a closed loop system that allows higher-quality jaggery to be produced, while recapturing the water from sugarcane that can be sold as premium drinking water, she says.

Another benefit, she says, is that the process requires up to 36 percent less of the sugarcane biomass to be burned than in traditional processing, allowing the excess to be dried and sold as fuel.

“Instead of one product extracted from the sugarcane, we have created three—jaggery, drinking water and biomass fuel,” says Atre, who credits the process engineering skills she learned while a UD student with helping her to engineer and model the proposed process. “If all the current jaggery plants are replaced with our technology, it has potential to recapture enough drinking water to fulfill the annual drinking water needs of about 47 million people.”

Atre and her partners, whose startup company is called TFT, plan to source their sugarcane from farmers within a 50-kilometer radius of the factory. Because the biomass fuel is derived from the sugarcane itself, the system is sustainable, they say, and includes a gas removal method to protect the local community by rendering any residual exhaust gases free of pollution.

Getting started, however, requires a significant financial investment to build a plant and purchase machinery. About 20 farmers near Pune—which is home to more than 7 million people—have raised some money for the factory, but additional funds are needed to transform the idea into a reality, Atre says. Once the first plant is up and running, she envisions expanding the business model into a franchise with factories in other areas of India where jaggery production exists.

“We don’t need to own the factories,” she says. “We can license the technology to the local people, and sell the plant and machinery so that there can be many more factories set up by farmers in other regions of India.”

Atre returned to the UD campus in May as a finalist in the Horn Program in Entrepreneurship’s 2014 Hen Hatch, the University’s premier business startup funding competition (see sidebar). She and her brother were awarded a $2,000 second-place prize in the competition’s alumni track to help get the business off the ground.

Article by Karen Roberts, AS90