Transforming CO2 and Sugars Into Biofuel 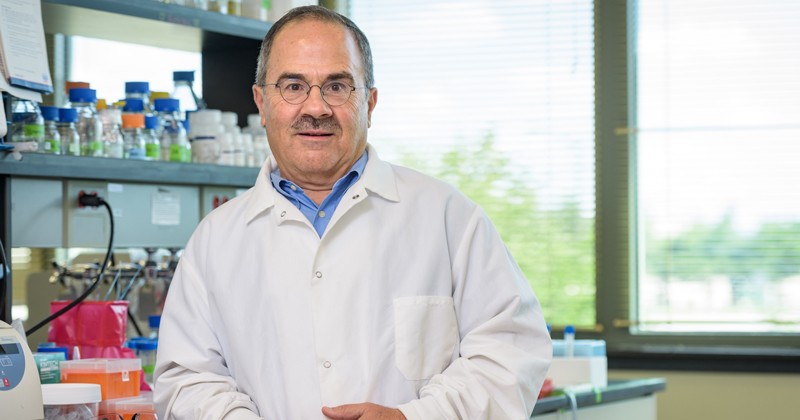 In the quest to reduce carbon emissions into the atmosphere and curb climate change, University of Delaware researchers are turning to an interesting ally: bacteria that consume biomass sugars and CO2.

With a $2.7 million grant from the U.S. Department of Energy’s Advanced Research Projects Agency-Energy (ARPA-E), UD Professor Eleftherios (Terry) Papoutsakis is developing a system to produce bioenergy from a mix of microbes that can convert carbon dioxide into useful chemicals. He is collaborating with Nicholas Sandoval, an assistant professor of chemical engineering at Tulane University and a postdoc UD alumnus, Marianthi Ierapetritou, the Gore Centennial Chair in the Department of Chemical and Biomolecular Engineering at UD, and another UD postdoctoral alumnus Shawn Jones, who is now a process and development manager at Arkion Life Sciences.

This project is one of 15 recently funded by the Department of Energy to decrease carbon emissions in biorefining processes through the ARPA-E ECOSynBio program. According to the agency, these ECOSynBio projects will “develop technologies to explore innovative synthetic fermentation and biorefining processes that can be used across the range of energy, transportation, and agriculture spaces anywhere where biorefining is used to make processes more efficient and lower carbon emissions.”

The power and potential of microbes

For several years, Papoutsakis, the Unidel Eugene Du Pont Chair of Chemical and Biomolecular Engineering, has studied how microbial consortia, or strategic combinations of bacteria, can be used to convert chemicals into other chemicals using multi-step processes. His research group aims to develop biological processes to produce chemicals and fuels in a way that does not release carbon dioxide into the atmosphere and possibly captures it instead.

“We have built the science base for how these syntrophic microbes, two microbes working together, can do things,” said Papoutsakis, a member of the National Academy of Engineering. “So one of them is a professional CO2 fixer — that guy lives on CO2 and hydrogen. And then you make it work with a microbe that cannot fix CO2. We’ve shown that the system works, but we haven’t really forced the system to achieve the industrial metrics for performance.”

With this new funding, Papoutsakis will further develop the technology and bring it closer to the market. He aims to refine the system so that the bacteria will produce desirable metabolites and consume those that are less useful. These efforts will involve strain engineering using recombinant DNA and gene editing using CRISPR.

“It will elevate both the science and the technical capabilities and allow us to demonstrate the industrial performance capabilities of the system,” said Papoutsakis.

This syntrophic co-culture of microbes could someday be used to make a variety of products. The UD team is focusing first on isopropanol, also known as isopropyl alcohol. Eventually, he would like to see others adopt and scale the technology. Examples could include companies that aim to produce chemicals and fuels from renewable resources.