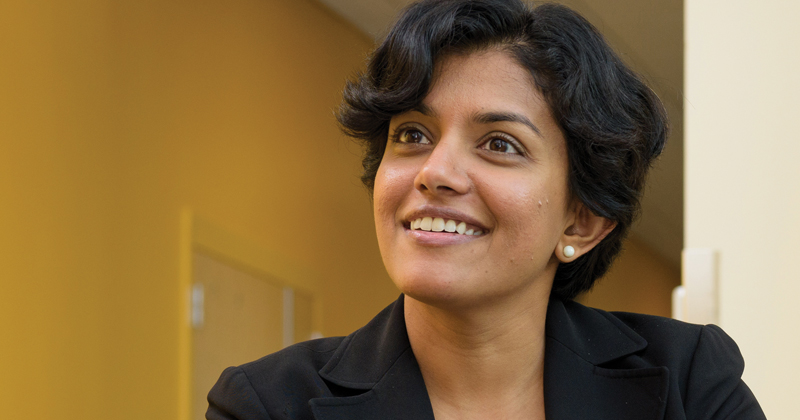 Arthi Jayaraman, associate professor of chemical and biomolecular engineering and materials science and engineering at the University of Delaware, was named an Associate Editor at Macromolecules, a peer-reviewed journal published by the American Chemical Society. Her appointment began on August 1, 2019 and was announced in an editorial by the journal’s editor-in-chief, Marc A. Hillmyer, on August 13, 2019.

Jayaraman, who is being promoted to the position of professor at UD, effective September 1, 2019, is the author of more than 75 scientific publications, with 10 manuscripts published just this year in Macromolecules, ACS Nano, Biomacromolecules, and Soft Matter.

Jayaraman’s research expertise lies in development of molecular models, theory and simulation methods to study molecular-level phenomena in polymers, colloids, and biopolymers so as to engineer materials for a broad range of applications. Her research honors include the American Institute of Chemical Engineers (AIChE) COMSEF Division Young Investigator award (2013), the American Chemical Society (ACS) PMSE division young investigator recognition (2014), and Department of Energy (DOE) Early Career Research Award (2010). She has also been featured as an emerging investigator in multiple peer-reviewed journals including the Journal of Chemical & Engineering Data (2018), Materials Research Express (2015-16), Soft Matter (2013) and Journal of Polymer Science B: Polymer Physics (2013).

A UD faculty member since 2014, Jayaraman received her bachelor’s degree in chemical engineering with honors from Birla Institute of Technology and Science in India and a master’s degree and doctoral degree in chemical and biomolecular engineering from North Carolina State University. After two years as a postdoctoral researcher in materials science and engineering at the University of Illinois, Jayaraman joined the University of Colorado, Boulder, as an assistant professor in 2008, where she taught until joining UD six years later.