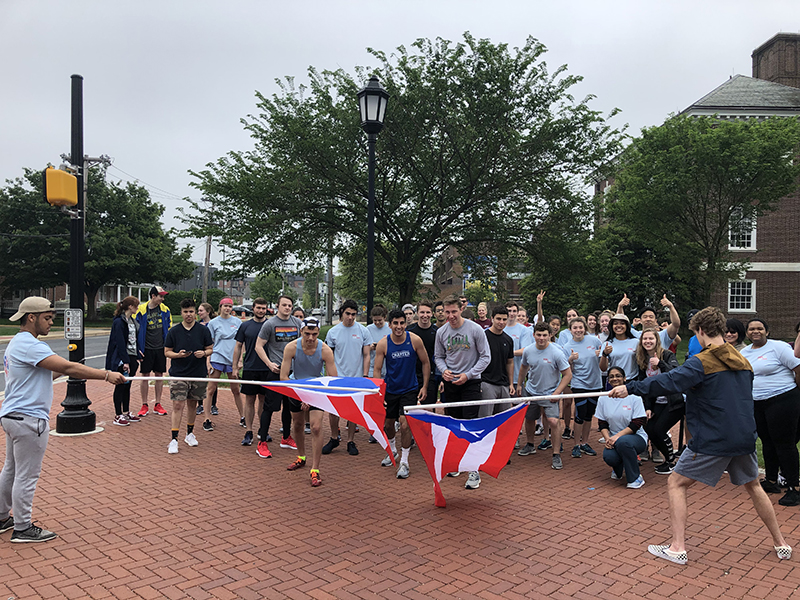 Jaeah Yoo, Mechanical Engineering, Class of 2021, will be traveling to Puerto Rico with his registered student organization (RSO), People for Puerto Rico (PPR), to carry out a dream two years in the making.

The PPR President and member of Blue Hen Leadership Program (BHLP) stuck through the ups and downs of running an organization and through growth and self-reflection, made a service trip to Puerto Rico a reality.

“At Ignite!, I was exposed to entrepreneurship and the biggest thing I learned was the value of finding a problem,” said Jaeah. “It’s the first step in the entrepreneurial process; you need it before you can build anything, you can’t just make a product and hope that people want it. You need to find a problem, validate it and work on the pain points.” The young college student was committed to finding a problem to explore and after following the story of Puerto Rico’s hurricane disaster, decided it was time to jump into action.

“It blew my mind how quickly and normally Texas seemed to be able to recover from the disaster compared to Puerto Rico,” said Jaeah. “I had always wanted to do some sort of service trip, actually help people with my feet on the ground, doing hands-on work and seeing the impact in the people I was helping. Being surrounded by and involved in the Horn Entrepreneurship community, I really learned that change is down to you to get out and do it.”

Jaeah started the RSO of People for Puerto Rico with seven founding members in the fall of 2017. The end goal was to organize a service trip to Puerto Rico to help the disaster relief efforts.

“Creating the club helped me get on my way to accomplishing some of my biggest goals,” said Jaeah. “I would be able to impact people through service while experiencing a vast new field of recovery work that would let me look for industry problems. I also thought the club would be a great way to create meaningful relationships and memories with other students on campus.”

The initial semester proved to be challenging for Jaeah and PPR. The club struggled with attendance, and an eventual service trip seemed out of reach: RSO rules do not allow clubs to run their own trips. With the club’s future in doubt, Jaeah was prepared to back away but wanted to gauge the turnout at activities night in the fall semester before making his final decision.

“Almost immediately, we were approached by the Blue Hen Leadership Program. They asked to partner with us to help get the trip off the ground since they admired all the work we had done,” said Jaeah with a smile. “Through BHLP I realized I had to first change some things within myself if I wanted to influence others to help me make social impact in Puerto Rico. The club started to improve drastically with my new leadership style and we had a really successful fall with a 100% increase in attendance, with our biggest meeting being some 35 members.”

People for Puerto Rico ran several fundraising events throughout the school year, including a dodge ball tournament. The club also ran a bracelet sale and raised over $1,000 for the trip. On May 4, PPR hosted a 5K race on the green with over 50 runners involved. The service trip will begin fundraising in fall 2019 and will include about 25 students across PPR and BHLP, with a planned time over winter session to visit the American territory. Applications are closed for the spring, but will reopen in the fall.

“Getting the trip together has taught me how important it is to just do it and stick with it. We had support from the start that quickly died, and through that I realized I really wanted to chase it and get to that next level. Thanks to everyone I have met through Horn Entrepreneurship, PPR and BHLP I have been able to push myself to create something truly impactful and meaningful” said Jaeah.

The trip will be accepting applications again in the fall. If you have any questions about the trip, reach out to Jaeah Yoo.