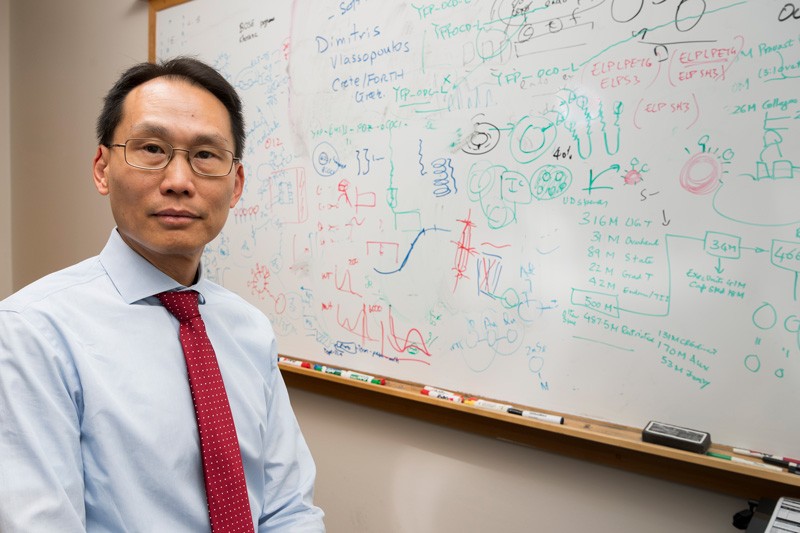 Two shelves in Wilfred Chen’s office are lined with “Star Wars” movie memorabilia. Not long ago, the protein engineering research that takes place in his laboratory could have been the subject of science fiction, too.

Chen, the Gore Professor of Chemical Engineering at the University of Delaware, develops technologies to modify proteins and DNAs in beneficial ways for applications that range from human health to sustainable energy. This includes novel uses of DNA computing and CRISPR Cas9, technologies of growing interest in synthetic biology. For example, Chen’s team has developed a technology to program strands of DNA into switches that turn proteins on and off — an innovation that could lead to the development of new cancer therapies and other drugs.

Chen has a different niche than others using the technology. “I am not applying the technology to do genome editing nor am I doing the more conventional gene regulation,” he said. “I am trying to develop a new way to use it for conditional activation.”

Chen joined UD in 2011 as the Gore Professor of Chemical Engineering. He was previously a Presidential Chair of Chemical Engineering at the University of California, Riverside. He earned his bachelor’s degree in chemical engineering at the University of California, Los Angeles, and his doctoral degree in chemical engineering from the California Institute of Technology. He also spent a year conducting post-doctoral research at the Institute of Biotechnology, ETH-Honggerberg, in Zurich, Switzerland.

Building on a legacy

“Wilfred is a leader in biomolecular and protein engineering and is widely recognized for his work in synthetic biology for constructing microorganisms and functional biomolecules for a broad spectrum of applications,” said Papoutsakis. “His work has great implications and applications in detection of pathogens, drug discovery, cancer diagnosis, all the way to bioremediation and bioenergy applications. What’s more, Wilfred is a great collaborator and team player, a great colleague and departmental citizen, dedicated to UD, our profession and excellence in research and education. Wilfred has mentored many doctoral students and postdoctoral fellows, several of which went on to successful academic careers.”