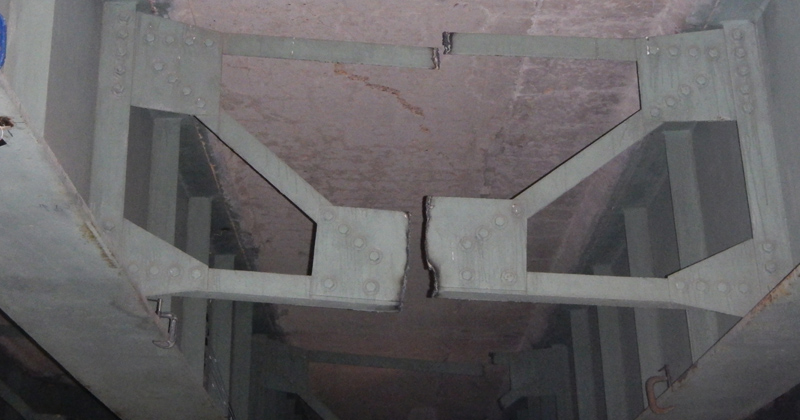 The Delaware River and Bay Authority (DRBA) and the University of Delaware (UD) recently collaborated on a project that is aimed at evaluating the strength limits for in-service bridges. Specifically, the current I-295 Southbound Reconstruction Project led to the decommissioning of a steel bridge which UD researchers destructively tested.  This test, which took placeearlier this week, was the third in a series of similar tests conducted through the DRBA and UD partnership.

“Through this collaboration with the University of Delaware, we are given a rare and unique opportunity to evaluate the performance of actual structures of our local region,” explained Delaware River and Bay Authority Project Engineer Brent C. Van Lith. “This field testing is being used to validate and enhance our engineering capabilities.”

The mostrecent test involved placing numerous sensors on the steel bridge to determine its responses when forces, significantly greater than those resulting from worst case traffic conditions, were applied. Two separate tests were conducted. In one test, damage was induced into a single girder of a multi girder bridge by cutting into it with increasing severity. This allowed the team to see how severe damage sustained by one girder affects the remaining parts of the bridge. In the second test, a different span of the bridge was loaded incrementally using hydraulic jacks until all four of the girders of that bridge reached their failure capacity.

“Each of these tests has produced progressively more information for bridge engineers and researchers about the significant strength of these bridges that have been in service for decades” Van Lith added.  “We believe the results of this third set of tests, which has benefited greatly from lessons learned during the first two test, will provide information that will further improve the safety of our bridges.”

The results of the bridge testing will be used to assess the actual factor of safety of current bridges, which the UD researchers predict is higher than normally assumed, and to understand how bridge behavior changes when their members are damaged. “These tests will be allow us to evaluate current bridge design methods and hopefully will lead to future designs that are more economical to build, less expensive to maintain, and last longer,” says Jennifer McConnell, an associate professor of civil and environmental engineering at UD and one of the UD faculty involved in the project.

About the Delaware River and Bay Authority
The DRBA, a bi-state governmental agency created by Compact in 1962, owns and operates the Delaware Memorial Bridge, the Cape May- Lewes Ferry, and the Forts Ferry Crossing. The DRBA also manages corporate and aviation properties through its economic development powers – two airports in New Jersey (Millville Airport and Cape May Airport) and three in Delaware (New Castle Airport, Civil Air Terminal and Delaware Airpark). All DRBA operating revenues are generated through the bridge, ferry and airport facilities. For more information, visit www.drba.net.