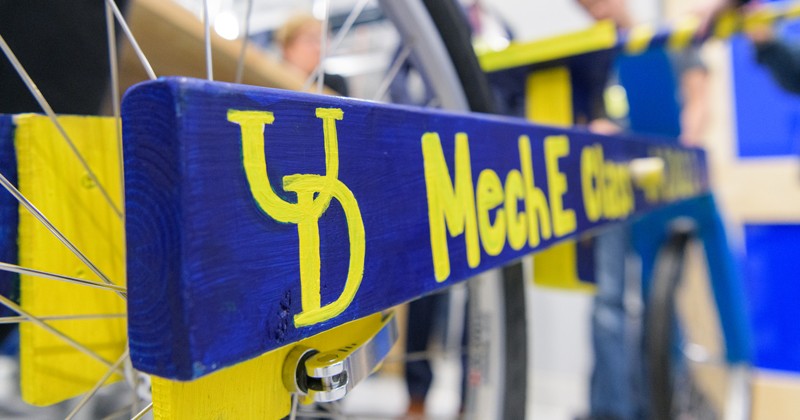 Under normal circumstances, it can be a challenge to find industry internships and connections for undergraduate freshmen and sophomore engineering students. This is mainly because when employers bring on interns, they are looking for juniors and seniors to preview those students for the possibility of eventually hiring them.

Throw the coronavirus (COVID-19) pandemic into the mix, which has led to the cancellation of many in-person marketing events, as well as job and internship opportunities, and the prospects for freshmen and sophomores to find meaningful industry internships and connections gets even more difficult.

Because of this, the Department of Mechanical Engineering in the University of Delaware’s College of Engineering teamed with UD’s Career Center to host an on-line job shadow program where UD alumni who now have meaningful professional careers were paired with current mechanical engineering students. This allowed alumni to give advice and form connections with the current students who are seeking professional guidance.

The program was spearheaded on the mechanical engineering side by Jennifer Buckley, an associate professor in the Department of Mechanical Engineering, and on the Career Center side by Ryan Fuller, assistant director of employer and alumni engagement, and Renae Love, a career counselor. It saw 30 mechanical engineering alumni link up with around 50 students.

“We were able to match each host with a student and then some hosts had more than one student,” said Fuller. “We matched them for one-hour informational interviews over Zoom and then, certainly, if any of the alums or students wanted to continue the conversation further, it was up to them to do that.”

The hosts came from a range of companies including the National Aeronautics and Space Administration (NASA), Boeing Commercial Airplanes, DuPont, W. L. Gore and Associates, and Walt Disney Imagineering, among others.

Buckley said that the positive response to the program speaks to the tight community that is formed in the department and shows the willingness of the alumni to help current students.

“Having 50 students participate, which is a tenth of our student population, is a very good response,” said Buckley. “We wanted to make sure that for people who had their internships cancelled, they had an opportunity to do some job development and this was really a great help. The alums that I heard from said that it was great to meet these students. There were a couple of them that said, ‘This is somebody who once our hiring opens up, I’ll definitely be interested in them’ which is great. That’s exactly what we wanted.”

Erin Rezich, a UD alumna who graduated with a degree in mechanical engineering in 2019 and now works with NASA, said she agreed to be a part of the program in order to show students that there is life beyond exams and the classroom and that the real world comes up quicker than they might expect.

Rezich was paired with four different students and she had about four, one-hour long conversations with each student.

“They had questions about what I do and what it’s like working for NASA and how I got here. They asked me, ‘What would you do if you were back in my shoes?’ So it was good to talk to current students and see how the [mechanical engineering] program has even evolved in the last year,” said Rezich.

As for advice for current undergraduate students, Rezich said that it is important to extend beyond the classroom as much as possible.

“As opportunities arise, say yes. Because a lot of seemingly random opportunities came up while I was an undergrad but I can honestly trace them back to me sitting in my current position today at NASA,” said Rezich. “The more opportunities you say yes to, the higher chances you have of getting where you want to go.”

Originally from South Dakota, Rezich said that what stuck with her from her time at UD was the hands-on learning opportunities the department afforded her and that the department is very much like a family.

“The department is very close knit and many of the professors are actively looking out for the students in many ways,” said Rezich. “It’s kind of corny but in a way, they’re definitely a family and that was a very good environment for me to grow up and to be an engineer in.”

Buckley, who is also an alumna of the department, said that the willingness of the alumni to devote their time and effort to the job shadow program speaks volumes about the department’s familial atmosphere.

“We’re really proud of our community. It’s something that we focus on, starting very early with all of our students,” said Buckley. “I’m an alum of the program from 20 years ago and I’m still in contact with the people who were my year and I now get to teach with people who were my professors who have stayed my mentors. I think that’s kind of who we are and who we’ve always been. That shows in times like this. Being able to put out a call for volunteers and immediately get responses, shows how our alumni step up. There’s a lot that contributes to the sense of community in this major.”

If any other departments at the university are interested in teaming up with the Career Center for a virtual job shadow program, contact Ryan Fuller at (rfuller@udel.edu) or reach out to the Career Center at (302) 831-2392.