Home » In the Loop 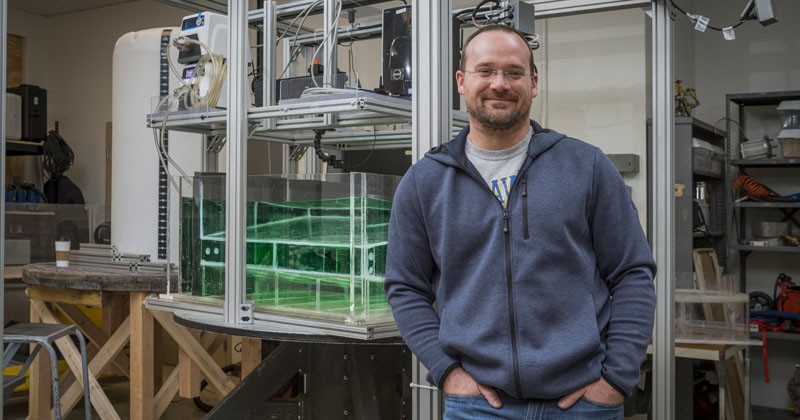 Research on unusual ocean currents could save lives, benefit industries

In a lab at the University of Delaware, researchers are unlocking mysteries about ocean currents that could have far-reaching impacts, from boosting economic benefits to even saving lives in the face of a hurricane.

Over the last decade, a growing number of scientists and entrepreneurs have buzzed about the “blue economy” — the sustainable use of ocean resources for economic benefit. If we study the ocean and uncover more of its inner workings, we can learn how to do things like catching fish and drilling for oil without compromising the health of the ecosystem.

Western boundary currents, the strong intense currents seen on the western boundary of each major ocean basin, such as the Gulf Stream or the Kuroshio current, transport significant amounts of heat from the equatorial regions towards the poles, thus playing a major role in Earth’s climate, and are important to the life-cycles of many ocean species. Despite their great importance, many unanswered questions concerning their fundamental dynamics remain, particularly concerning their stratified, or layered, nature.

Joe Kuehl, assistant professor of mechanical engineering at UD, with his graduate student Charles McMahon, and Vitalii Sheremet, a scientist at the Graduate School of Oceanography at the University of Rhode Island, recently shed new light on this long-standing oceanographic problem. In an article published April 2020 in the journal Fluids, they derived, solved and validated a new numerical formulation for accounting for viscous, layer western boundary current systems.

An essential tool for their research is a water-filled rotating table at UD that simulates the Earth’s rotation to study ocean currents. It’s one of only a handful in operation in the U.S.

“By rotating the tank of water, you can basically study a system that mimics the flow of water in the ocean,” he said.

Kuehl also is using the rotating table, coupled with field studies, to explore puzzling currents in the Gulf of Mexico. From Hurricane Katrina to the Deepwater Horizon oil spill, disasters happen in the Gulf of Mexico — and they are exacerbated when powerful currents carry torrents of water to unexpected places. Before the next catastrophe, researchers want to improve their understanding of the currents that flow through the gulf.

One of the most important currents in the Gulf of Mexico is the Loop Current. This swath of warm water flows from the space between the Yucatán Peninsula and Cuba toward the Florida Panhandle and back around. The behavior of loop currents, including the Gulf Loop Current, is a longstanding problem in oceanography, and Kuehl is part of a growing community of scientists determined to solve it.

Hurricanes feed off warm surface waters in the ocean, and the Loop Current is a huge energy source.

“The Loop Current is one of the major factors affecting the strength of hurricanes in the Gulf of Mexico,” said Kuehl. “For instance, with Hurricane Katrina, the models did a very poor job of estimating Katrina’s strength.” 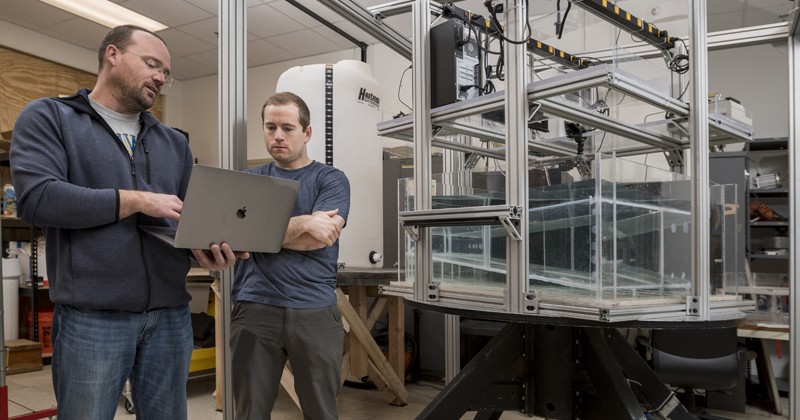 During Katrina, the Loop Current was unexpectedly in an extended state, meaning that it pushed farther north and west into the Gulf of Mexico than expected. The result? Hurricane Katrina significantly increased in intensity when it entered the gulf and slammed into New Orleans instead of dying down before hitting the shore like experts expected. Better understanding of loop current physics could save lives and property during future hurricanes.

It could also yield economic benefits. “Loop currents are a huge factor affecting off-shore oil operations in the Gulf of Mexico,” Kuehl said.

For example, if the Loop Current had behaved differently during the Deepwater Horizon oil spill, it could have pushed oil toward the Florida Keys and caused even more damage to coasts and wildlife. When companies know that the Loop Current is in an extended state, they can shut down supply or drilling operations to reduce the risk of equipment damage or oil spills. Better estimates of Loop Current behavior could help the environment and also help oil and coastal energy companies save billions of dollars. 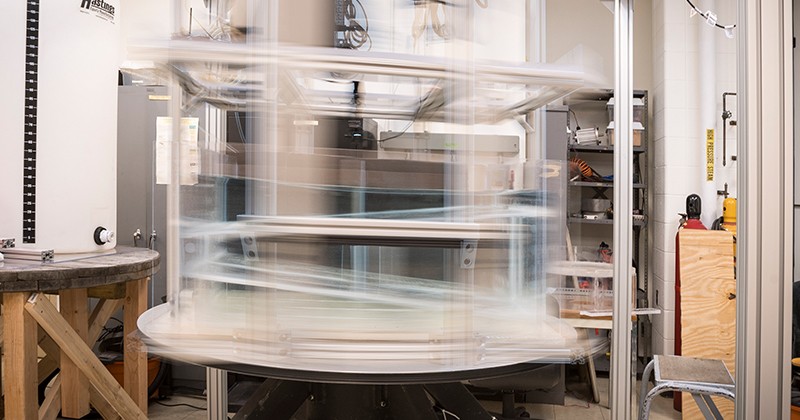 The water-filled rotating table at UD that simulates the Earth’s rotation to study ocean currents. It’s one of only a handful in operation in the U.S.

With Robert Weisberg, at the University of South Florida, Kuehl is placing sensors along the West Florida shelf to better understand the mechanisms governing when the Loop Current extends into the Gulf of Mexico and when it leaps directly from the Yucatán to Florida. This project is funded by the National Academy of Sciences.

Kuehl also is using laboratory experiments to develop improved models of Loop Current activity through a project funded by the National Science Foundation. Through rotating table experiments that simulate loop currents, including the famous Loop Current in the Gulf of Mexico, Kuehl has determined that loop currents can exhibit multiple states and behavior dependent upon their past behavior. That is, loop currents display hysteresis.

“Even if we knew all the parameters, everything that was going on, and used it to run a model, we still wouldn’t be able to get the Loop Current right unless we knew the history of the current, whether it was looping into the Gulf of Mexico or leaping straight across to Florida,” he said.

His experiments also suggest that loop currents are governed by a cusp catastrophe geometry of solutions. Imagine folding a piece of cloth over on itself to make a wrinkle on one end. One end looks like an S shape from the side; the other is flat. We can think about the loop current in a similar way. Where it folds upon itself is where things get interesting.

“Understanding how the system moves around on that surface is a different way we can use to predict what’s going to happen with the Loop Current,” he said.

The ultimate goal of this work: understanding, environmental stewardship, and helping to safeguard Gulf Coast communities.

Now, Kuehl and his colleagues are continuously improving their model to predict loop current behavior in the Gulf of Mexico. Investigators elsewhere are using satellite data and oceanographic observational programs, and Kuehl is hopeful that his group will be able to use those measurements to optimize their model.

Kuehl was a member of the National Academy of Sciences Committee on Advancing Understanding of Gulf of Mexico Loop Current Dynamics. On the UD campus, he also works across disciplines, collaborating with colleagues in the College of Earth, Ocean and Environment on experimental methods, observational methods, numerical modeling and more.