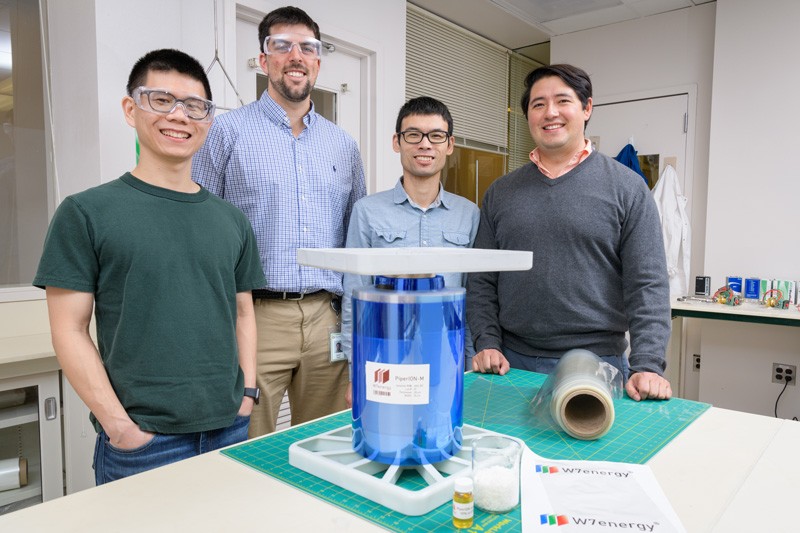 W7energy, a startup company with roots at the University of Delaware, just got a proverbial shot in its research arm.

The company was recently awarded $3.4 million in new funding from the U.S. Department of Energy’s Advanced Research Projects Agency-Energy (ARPA-E) to advance and commercialize a new class of polymer membranes that will make fuels cells much more economical.

The polymer membranes are a platform technology that will enable many other technologies, too, for clean hydrogen production, battery storage, removing carbon dioxide from the air and more.

“UD is working in collaboration with its partners to build an ecosystem that encourages and supports entrepreneurs to take their innovations from idea to commercialization, where they can contribute to the state’s economic development and positively impact society. Widespread use of these membrane products has the potential to dramatically impact our future energy use, offering high efficiency in an environmentally-friendly package,” said Charles G. Riordan, vice president for research, scholarship and innovation at UD.

W7energy grew out of UD-developed technology from the lab of Yushan Yan, Henry B. du Pont Chair of Chemical and Biomolecular Engineering.

The startup is developing technology to manufacture a class of hydroxide exchange membranes (HEMs) that efficiently transport hydroxide ions, which are negatively charged molecules that typically make a solution alkaline (basic), meaning that it has a pH greater than 7. However, advanced polymer design and engineering by Yan’s team at UD has resulted in these game-changing HEM membranes, which are chemically stable, ionically conductive and mechanically robust, making them a superior choice for hydrogen or ammonia fuel cells, among other things.

Fuel cells work by converting chemical energy into electricity to create clean power. Key to this conversion are a membrane and two catalysts that can speed the chemical reaction inside the fuel cell.

Current eco-friendly fuel cell vehicles on the market, such as the Toyota Mirai, the Honda Clarity and the Hyundai Nexo, rely on proton exchange membranes (PEMs) to convert chemical energy to electricity. But PEMs require expensive components, such as platinum catalysts and titanium bipolar spates, to do the job.

By contrast, W7energy’s polymer membranes are efficient with less expensive catalysts like nickel or silver, making them a more economical option.

“The idea is to reduce the cost of fuel cell cars and clean hydrogen to enable zero-emission transportation,” said Lan Wang, W7energy’s chief technology officer. Wang earned his doctoral degree in chemistry from UD in 2018 and completed postdoctoral work in the Yan lab, before joining W7energy full-time.

Armed with the DOE funding, and an additional $100,000 from a Delaware Division of Small Business EDGE grant, the research team is working to get the membrane processes “just right” so that they provide superior performance in ways that are scalable for mass production.

The research team also plans to expand work in the lab to include in-house characterization and testing of new membrane materials in functional fuel cells and water-splitting electrolyzers, an additional capability that will set W7energy apart from its competitors.

“We have the chance to really revolutionize the renewable energy sector,” said Santiago Rojas-Carbonell, W7energy’s chief operating officer and a former UD post-doctoral researcher from the Yan lab. “This is a platform technology that, in addition to zero-emission transportation, can be applied to large-scale and long-duration wind and solar energy storage, and clean hydrogen that can reduce carbon dioxide emissions from many other sectors.”

For example, ammonia synthesis, metal refining and petroleum refining require high-quality, high-purity hydrogen. Today this hydrogen is produced from natural gas or coal. Making hydrogen from these materials is not environmentally friendly. With W7energy’s systems, this hydrogen could be produced directly from water, eliminating the carbon dioxide left behind as a bi-product in current systems.

To advance this work, the team plans to hire three more engineers soon. Five of the company’s six current employees are Blue Hens.

Yan said that he feels a deep connection and a sense of pride to be doing this work in Delaware, where well-known industry names like DuPont and Gore have contributed proton-conducting polymer membranes that help power today’s fuel cell vehicles. Especially fitting is that W7energy is currently housed on the grounds of the DuPont Experimental Station.

The startup company is located at Delaware Innovation Space at the Experimental Station in Wilmington, Delaware, thanks to a UD FastPass award, which provided $50,000 in operational and funding support to help kickstart the company into high gear.

“The work of W7energy will reduce the current cost of hydrogen fuel cells, making an affordable option to traditional internal combustion engines but at a greatly reduced carbon footprint — that is truly revolutionary,” said William Provine, president and CEO of Delaware Innovation Space, the business incubator that is a public-private partnership of the state of Delaware, DuPont and UD.

“W7energy is a prime example of the kind of company the Delaware Innovation Space is here to support, those developing science-based solutions to large-scale problems with a scalable and sustainable business model.”

According to Yan, many other supporters have helped the startup get where it is today.

With the help of UD’s Office of Economic Innovation and Partnerships, W7energy has acquired six patents for its unique membrane and related technologies, which the company licenses from the University.

An early startup grant program competition established by the University with the support of the Unidel Foundation provided $150,000, which the W7 energy team used to purchase critically needed equipment for membrane casting.

“Having the initial support from Horn, Unidel and Delaware Innovation Space allowed us to become operational more quickly,” Yan said. “This permitted the team to advance both the company and the technology, all of which allowed us to be competitive in going after funding from the Department of Energy, and later, the state of Delaware.”

In particular, Yan credited Christina Pellicane, director of commercialization programs, and Dan Freeman, founding director, at Horn Entrepreneurship with playing a “large role in coaching the graduate students and post-doctoral researchers on entrepreneurship.”

Through Horn Entrepreneurship’s signature Blue Hen Proof of Concept Program, for example, Wang, Rojas-Carbonell and co-founder Brian Setzler learned about creating a startup company and refining their presentation skills and were mentored throughout the initial technology commercialization activities necessary to launch the company.

In follow-on offerings, through the National Science Foundation’s Innovation Corps program, Rojas-Carbonell said the team learned the value of talking with potential customers early and often to ensure that the company’s materials are a match for market needs. These are skills the W7energy team plans to leverage as the company develops new materials.

And while Yan is confident that W7energy has a technology that can succeed in the marketplace, he recognizes that the company is about more than a product, it is about people.

“No matter what happens, in the end, I’m assured that I will have produced several entrepreneurs,” he said.